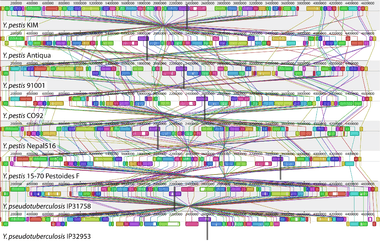 Whole genome alignment is a typical method in comparative genomics. This alignment of eight Yersinia bacteria genomes reveals 78 locally collinear blocks conserved among all eight taxa. Each chromosome has been laid out horizontally and homologous blocks in each genome are shown as identically colored regions linked across genomes. Regions that are inverted relative to Y. pestis KIM are shifted below a genome's center axis.[1]

Comparative genomics is a field of biological research in which the genomic features of different organisms are compared.[2][3] The genomic features may include the DNA sequence, genes, gene order, regulatory sequences, and other genomic structural landmarks.[3] In this branch of genomics, whole or large parts of genomes resulting from genome projects are compared to study basic biological similarities and differences as well as evolutionary relationships between organisms.[2][4][5] The major principle of comparative genomics is that common features of two organisms will often be encoded within the DNA that is evolutionarily conserved between them.[6] Therefore, comparative genomic approaches start with making some form of alignment of genome sequences and looking for orthologous sequences (sequences that share a common ancestry) in the aligned genomes and checking to what extent those sequences are conserved. Based on these, genome and molecular evolution are inferred and this may in turn be put in the context of, for example, phenotypic evolution or population genetics.[7]

Virtually started as soon as the whole genomes of two organisms became available (that is, the genomes of the bacteria Haemophilus influenzae and Mycoplasma genitalium) in 1995, comparative genomics is now a standard component of the analysis of every new genome sequence.[2][8] With the explosion in the number of genome project due to the advancements in DNA sequencing technologies, particularly the next-generation sequencing methods in late 2000s, this field has become more sophisticated, making it possible to deal with many genomes in a single study.[9] Comparative genomics has revealed high levels of similarity between closely related organisms, such as humans and chimpanzees, and, more surprisingly, similarity between seemingly distantly related organisms, such as humans and the yeast Saccharomyces cerevisiae.[4] It has also showed the extreme diversity of the gene composition in different evolutionary lineages.[8]

Comparative genomics has a root in the comparison of virus genomes in the early 1980s.[8] For example, small RNA viruses infecting animals (picornaviruses) and those infecting plants (cowpea mosaic virus) were compared and turned out to share significant sequence similarity and, in part, the order of their genes.[10] In 1986, the first comparative genomic study at a larger scale was published, comparing the genomes of varicella-zoster virus and Epstein-Barr virus that contained more than 100 genes each.[11]

The first complete genome sequence of a cellular organism, that of Haemophilus influenzae Rd, was published in 1995.[12] The second genome sequencing paper was of the small parasitic bacterium Mycoplasma genitalium published in the same year.[13] Starting from this paper, reports on new genomes inevitably became comparative-genomic studies.[8]

The first high-resolution whole genome comparison system was developed in 1998 by Art Delcher, Simon Kasif and Steven Salzberg and applied to the comparison of entire highly related microbial organisms with their collaborators at the Institute for Genomic Research (TIGR). The system is called MUMMER and was described in a publication in Nucleic Acids Research in 1999. The system helps researchers to identify large rearrangements, single base mutations, reversals, tandem repeat expansions and other polymorphisms. In bacteria, MUMMER enables the identification of polymorphisms that are responsible for virulence, pathogenicity, and anti-biotic resistance. The system was also applied to the Minimal Organism Project at TIGR and subsequently to many other comparative genomics projects.

Saccharomyces cerevisiae, the baker's yeast, was the first eukaryote to have its complete genome sequence published in 1996.[14] After the publication of the roundworm Caenorhabditis elegans genome in 1998[15] and together with the fruit fly Drosophila melanogaster genome in 2000,[16] Gerald M. Rubin and his team published a paper titled "Comparative Genomics of the Eukaryotes", in which they compared the genomes of the eukaryotes D. melanogaster, C. elegans, and S. cerevisiae, as well as the prokaryote H. influenzae.[17] At the same time, Bonnie Berger, Eric Lander, and their team published a paper on whole-genome comparison of human and mouse.[18]

With the publication of the large genomes of vertebrates in the 2000s, including human, the Japanese pufferfish Takifugu rubripes, and mouse, precomputed results of large genome comparisons have been released for downloading or for visualization in a genome browser. Instead of undertaking their own analyses, most biologists can access these large cross-species comparisons and avoid the impracticality caused by the size of the genomes.[19]

Next-generation sequencing methods, which were first introduced in 2007, have produced an enormous amount of genomic data and have allowed researchers to generate multiple (prokaryotic) draft genome sequences at once. These methods can also quickly uncover single-nucleotide polymorphisms, insertions and deletions by mapping unassembled reads against a well annotated reference genome, and thus provide a list of possible gene differences that may be the basis for any functional variation among strains.[9]

One character of biology is evolution, evolutionary theory is also the theoretical foundation of comparative genomics, and at the same time the results of comparative genomics unprecedentedly enriched and developed the theory of evolution. When two or more of the genome sequence are compared, you can get the evolutionary relationships of the sequences in a phylogenetic tree. Based on a variety of biological genome data and the study of vertical and horizontal evolution processes, one can understand vital parts of the gene structure and its regulatory function. But in a genome about 1.5% ~ 14.5% of the genes are related to the "lateral migration phenomenon", namely the transfer of a gene between populations which can exist at the same time. Thus, the differences in sequences have nothing to do with evolution.

Similarity of related genomes is the basis of comparative genomics. If two creatures have a recent common ancestor, the differences between the two species genomes are evolved from the ancestors’ genome. The closer the relationship between two organisms, the higher the similiarities between their genomes. If there is close relationship between them, then their genome will display a linear behaviour (synteny), namely some or all of the genetic sequences are conserved. Thus, the genome sequences can be used to identify gene function, by analyzing their homology (sequence similarity) to genes of known function.

Human FOXP2 gene and evolutionary conservation is shown in and multiple alignment (at bottom of figure) in this image from the UCSC Genome Browser. Note that conservation tends to cluster around coding regions (exons).

Comparative genomics exploits both similarities and differences in the proteins, RNA, and regulatory regions of different organisms to infer how selection has acted upon these elements. Those elements that are responsible for similarities between different species should be conserved through time (stabilizing selection), while those elements responsible for differences among species should be divergent (positive selection). Finally, those elements that are unimportant to the evolutionary success of the organism will be unconserved (selection is neutral).

One of the important goals of the field is the identification of the mechanisms of eukaryotic genome evolution. It is however often complicated by the multiplicity of events that have taken place throughout the history of individual lineages, leaving only distorted and superimposed traces in the genome of each living organism. For this reason comparative genomics studies of small model organisms (for example the model Caenorhabditis elegans and closely related Caenorhabditis briggsae) are of great importance to advance our understanding of general mechanisms of evolution.[20][21]

Computational approaches to genome comparison have recently become a common research topic in computer science. A public collection of case studies and demonstrations is growing, ranging from whole genome comparisons to gene expression analysis.[22] This has increased the introduction of different ideas, including concepts from systems and control, information theory, strings analysis and data mining.[23] It is anticipated that computational approaches will become and remain a standard topic for research and teaching, while multiple courses will begin training students to be fluent in both topics.[24]

Computational tools for analyzing sequences and complete genomes are developed quickly due to the availability of large amount of genomic data. At the same time, comparative analysis tools are progressed and improved. In the challenges about these analyses, it is very important to visualize the comparative results.[25]

Visualization of sequence conservation is a tough task of comparative sequence analysis. As we know, it is highly inefficient to examine the alignment of long genomic regions manually. Internet-based genome browsers provide many useful tools for investigating genomic sequences due to integrating all sequence-based biological information on genomic regions. When we extract large amount of relevant biological data, they can be very easy to use and less time-consuming.[25]

An advantage of using online tools is that these websites are being developed and updated constantly. There are many new settings and content can be used online to improve efficiency.[25]

Agriculture is a field that reaps the benefits of comparative genomics. Identifying the loci of advantageous genes is a key step in breeding crops that are optimized for greater yield, cost-efficiency, quality, and disease resistance. For example, one genome wide association study conducted on 517 rice landraces revealed 80 loci associated with several categories of agronomic performance, such as grain weight, amylose content, and drought tolerance. Many of the loci were previously uncharacterized.[30] Not only is this methodology powerful, it is also quick. Previous methods of identifying loci associated with agronomic performance required several generations of carefully monitored breeding of parent strains, a time consuming effort that is unnecessary for comparative genomic studies.[31]

The medical field also benefits from the study of comparative genomics. Vaccinology in particular has experienced useful advances in technology due to genomic approaches to problems. In an approach known as reverse vaccinology, researchers can discover candidate antigens for vaccine development by analyzing the genome of a pathogen or a family of pathogens.[32] Applying a comparative genomics approach by analyzing the genomes of several related pathogens can lead to the development of vaccines that are multiprotective. A team of researchers employed such an approach to create a universal vaccine for Group B Streptococcus, a group of bacteria responsible for severe neonatal infection.[33] Comparative genomics can also be used to generate specificity for vaccines against pathogens that are closely related to commensal microorganisms. For example, researchers used comparative genomic analysis of commensal and pathogenic strains of E. coli to identify pathogen specific genes as a basis for finding antigens that result in immune response against pathogenic strains but not commensal ones.[34]

Comparative genomics also opens up new avenues in other areas of research. As DNA sequencing technology has become more accessible, the number of sequenced genomes has grown. With the increasing reservoir of available genomic data, the potency of comparative genomic inference has grown as well. A notable case of this increased potency is found in recent primate research. Comparative genomic methods have allowed researchers to gather information about genetic variation, differential gene expression, and evolutionary dynamics in primates that were indiscernible using previous data and methods.[35] The Great Ape Genome Project used comparative genomic methods to investigate genetic variation with reference to the six great ape species, finding healthy levels of variation in their gene pool despite shrinking population size.[36] Another study showed that patterns of DNA methylation, which are a known regulation mechanism for gene expression, differ in the prefrontal cortex of humans versus chimps, and implicated this difference in the evolutionary divergence of the two species.[37]