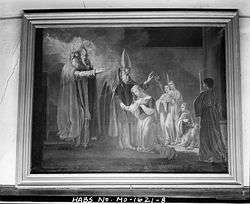 In the Catholic Church, a consecrated virgin is a woman who has been consecrated by the church to a life of perpetual virginity in the service of God. Consecrated virgins are to spend their time in works of penance and mercy, in apostolic activity and in prayer, according to their state of life and spiritual gifts.[1] Consecrated virgins should not be confused with consecrated hermits and anchorites, who have a different vocation.[2]

The Christian concept originated in the Vestal Virgins of ancient Roman religion. A life of virginity for the sake of Jesus and the Church, now in the form of Christian monasticism, was already mentioned in the New Testament.[3]

According to Catholic and Orthodox thought, the first sacred virgin was Mary, the mother of Jesus, who was consecrated by the Holy Spirit during the Annunciation. Tradition also has it that the Apostle Matthew consecrated virgins. Apostolic era virgins either continued to live with their own family or lived in a private house, because this form of life predated the foundation of religious orders. A number of early Christian martyrs were women or girls who had given themselves to Christ in perpetual virginity, such as Saint Agnes and Saint Lucy.

During the Middle Ages, the Rite of Consecration of a virgin who lived in the world gradually fell into disuse although individual bishops continued to bestow the consecration to some virgins. At the same time, the rite of consecration was maintained by nuns in monastic orders, such as the Benedictines and Carthusians. This consecration could be done either concurrently with or some time after the profession of solemn vows. Among Carthusian nuns, there is the unique practice of these virgins being entitled to wear a stole, a vestment otherwise reserved to clergy, which gives them certain liturgical privileges, mostly used during their reading of the Gospel at Matins. It has been speculated by scholars that this is a vestige of the Order of deacon.

In 1963 the Second Vatican Council requested a revision of the rite of the consecration of virgins that was found in the Roman Pontifical.[4] The revised Rite was approved by Pope Paul VI and published in 1970.[5] This consecration could be bestowed either on women in monastic orders or on women living in the world, which revived the form of life that had been found in the early Church.[6]

In 1972 Elizabeth Bailey became the first virgin to be consecrated in England since the 3rd century. [7]

As a form of Consecrated Life in the Church today

The 1970 Prænotanda to the Rite of Consecration to a Life of Virginity states the following requirements for women living in the world to receive the consecration:

that they have never married or lived in open violation of chastity; that, by their prudence and universally approved character, they give assurance of perseverance in a life of chastity dedicated to the service of the church and of their neighbor; that they be admitted to this Consecration by the Bishop who is the local Ordinary.

The approved liturgical rite whereby the bishop consecrates the candidate is by the solemn rite of Consecratio Virginium (Consecration of Virgins). The usual minister of the rite of consecration is the bishop who is the local ordinary.[8] Henceforth, the woman is committed, not only to perpetual virginity, but to leading a life of prayer and service, and is "strongly advised" to observe the Liturgy of the Hours.[9][10]

The legislation outlining this was provided in the most recent Code of Canon Law of the Catholic Church:

§1. Similar to these forms of consecrated life is the order of virgins, who, committed to the holy plan of following Christ more closely, are consecrated to God by the diocesan bishop according to the approved liturgical rite, are betrothed mystically to Christ, the Son of God, and are dedicated to the service of the Church.

§2. In order to observe their commitment more faithfully and to perform by mutual support service to the Church which is in harmony with their state these virgins can form themselves into associations.

Consecrated virgins belong to consecrated life. They are not supported financially by their bishop, but must provide for their own upkeep. These women work in professions ranging from teachers and attorneys to that of firefighter.[11] Some lead lives of contemplation as hermits. One notable example of the latter is Wendy Beckett, known as "Sister Wendy", a former member of the religious congregation of Sisters of Notre Dame de Namur, who became a consecrated virgin in 1970, and who, though living as a recluse, has supported herself through her work as a world-famous art critic.

Present situation in the Catholic Church