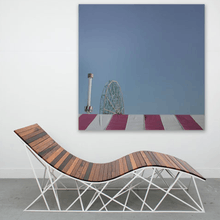 Reclaimed lumber is processed wood retrieved from its original application for purposes of subsequent use. Most reclaimed lumber comes from timbers and decking rescued from old barns, factories and warehouses, although some companies use wood from less traditional structures such as boxcars, coal mines and wine barrels. Reclaimed or antique lumber is used primarily for decoration and home building, for example for siding, architectural details, cabinetry, furniture and flooring.

In the United States of America, wood once functioned as the primary building material because it was strong, relatively inexpensive and abundant. Today many of these woods that were once plentiful are only available in large quantities through reclamation. One common reclaimed wood, longleaf pine, was used in factories and warehouses built during the Industrial Revolution. Longleaf heart pine was once the most functional wood for construction in America. The trees were slow-growing (taking 200 to 400 years to mature), tall, straight, and had a natural ability to resist mold and insects.[1] More importantly, it was abundant. Longleaf yellow pine grew in thick forests that spanned over 140,000 square miles (360,000 km2).[2]

Another previously common wood for building barns and other structures was redwood (Sequoia sempervirens) on the US west coast and American Chestnut. Beginning in 1904, a chestnut blight spread across the US killing billions of American Chestnuts, so when these structures were later dismantled, they were a welcome source of this desirable but later rare wood for subsequent reuse. American Chestnut wood can be identified as pre or post-blight by analysis of worm tracks in sawn timber. The presence of worm tracks suggests the trees were felled as dead standing timber, and are post-blight lumber.

Barns serve as one of the most common sources for reclaimed wood in the United States. Those constructed up through the early part of the 19th century were typically built using whatever trees were growing on or near the property. They often contain a mix of oak, chestnut, poplar, hickory and pine timber. Beam sizes were limited to what could be moved by man and horse. The wood was either hand hewn using an axe or squared with an adze. Early settlers also recognized the oak from experience with its European subspecies. Soon red, white, black, scarlet, willow, post and pin oak varieties were being cut and transformed into barns too.

Mill buildings throughout the Southeast also provide an abundant source of reclaimed wood. Some of these buildings and complexes cover more than a million square feet of ground, and can yield three to five times that amount of board feet of flooring. These buildings often have no economic or reuse possibility, can be a fire hazard, and may require varying degrees of environmental cleanup. Reclaiming lumber and brick from retired mills puts these materials to a new use instead of disposing them in a landfill.

Another source of reclaimed wood is old snowfence. At the end of their tenure on the mountains and plains of the Rocky Mountain region, snowfence boards are a valued source of consistent, structurally sound and reliable reclaimed wood. In many locations the water content of snowfence wood naturally drops to two percent, minimizing the need for treatment and thereby avoiding the risk of harmful offgassing associated with many types of reclaimed wood.

Reclaimed lumber is popular for many reasons: the wood's unique appearance, its contribution to green building, the history of the wood's origins, and the wood's physical characteristics such as strength, stability and durability. The increased strength of reclaimed wood is often attributed to the lack of air pollution that existed up until the 20th century as well as to the wood's often having been harvested from virgin growth timber, which had hundreds of years to grow before human intervention.

Reclaimed beams can be sawn into wider planks than newly harvested lumber, and many companies purport that their products are more stable than newly cut wood because reclaimed wood has been exposed to changes in humidity for far longer and is therefore more stable, allowing it to be used with radiant heating systems. In some cases, the timbers from which the boards were cut had been naturally expanding and contracting for over a century in their previous installation. Radiant heat, with its low temperatures and even distribution affects the wood flooring the same way, but the impact is much less dramatic with antique wood than newly sawn wood because antique wood has already been through this cycle for years.

The reclaimed lumber industry gained momentum in the early 1980s on the West Coast when large-scale reuse of softwoods began. The industry grew due to a growing concern for environmental impact as well as declining quality in new lumber.[3] On the East Coast, industry pioneers began selling reclaimed wood in the early 1970s but the industry stayed mostly small until the 1990s as waste disposal increased and deconstruction became a more economically alternative to demolition. A trade association, the Reclaimed Wood Council, was formed in May 2003 but dissolved in January 2008 due to a lack of participation among the larger reclaimed wood distributors.[4]

The Leadership in Energy and Environmental Design (LEED) Green Building Rating System is the US Green Building Council's (USGBC) benchmark for designing, building and operating green buildings. To be certified, projects must first meet the prerequisites designated by the USGBC and then earn a certain number of credits within six categories: sustainable sites, water efficiency, energy and atmosphere, materials and resources, indoor environmental quality, innovation and design process.

Using reclaimed wood can earn credits towards achieving LEED project certification. Because reclaimed wood is considered recycled content, it meets the 'materials and resources' criteria for LEED certification, and because some reclaimed lumber products are Forest Stewardship Council (FSC) certified, they can qualify for LEED credits under the 'certified wood' category.[5]

With reclaimed material being so popular, it is becoming more difficult to source. With such a high demand, some sellers try to pass newer wood off as antique.

It is also common (although not necessarily done intentionally) for species to be misidentified because it is difficult to tell the difference in older material unless it is cut open and examined, leaving the material less desirable. Professionals in the field and with established reclaimed wood enterprises do not have difficulty identifying the species.

Reclaimed lumber sometimes has pieces of metal embedded in it, such as broken off nails, so milling the material can often ruin planer knives, saw blades, and moulder knives. Nail-compatible saw blades are advisable for the same reason, as well as for safety. The alternative is to remove all metal from the reclaimed lumber, which is a costly and tedious process commonly achieved by scanning each piece of wood with a metal detector and then manually pulling out all nails, bolts, bullets, screws, buckshot, and other miscellaneous metal hardware. This process can make the cost of reclaimed lumber higher than new lumber.

Many sources of reclaimed wood cannot verify what the wood might have been treated with over its lifetime. This uncertainty leads to fears of harmful offgassing of volatile organic compounds associated with lead paint or various stains and treatments that may have been used on the wood. These fears are particularly pressing when the wood is for an interior application.