A hemicellulose (also known as polyose) is any of several heteropolymers (matrix polysaccharides), such as arabinoxylans, present along with cellulose in almost all plant cell walls.[1] While cellulose is crystalline, strong, and resistant to hydrolysis, hemicellulose has a random, amorphous structure with little strength. It is easily hydrolyzed by dilute acid or base as well as myriad hemicellulase enzymes. 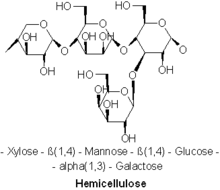 Most common molecular motif of hemicellulose

These polysaccharides contain many different sugar monomers. In contrast, cellulose contains only anhydrous glucose. For instance, besides glucose, sugar monomers in hemicellulose can include xylose, mannose, galactose, rhamnose, and arabinose. Hemicelluloses contain most of the D-pentose sugars, and occasionally small amounts of L-sugars as well. Xylose is in most cases the sugar monomer present in the largest amount, although in softwoods mannose can be the most abundant sugar. Not only regular sugars can be found in hemicellulose, but also their acidified form, for instance glucuronic acid and galacturonic acid can be present. Hemicellulos is often assosiated with cellulose, but it has different composition.

Section of a cell wall; hemicellulose in green

Hemicelluloses are embedded in the cell walls of plants, sometimes in chains that form a 'ground' - they bind with pectin to cellulose to form a network of cross-linked fibres.

Hemicelluloses are synthesised from sugar nucleotides in the cell's Golgi apparatus. Two models explain their synthesis: 1) a ‘2 component model' where modification occurs at two transmembrane proteins, and 2) a '1 component model' where modification occurs only at one transmembrane protein. After synthesis, hemicelluloses are transported to the plasma membrane via Golgi vesicles.

Microfibrils are cross-linked together by hemicellulose homopolymers. Lignins assist and strengthen the attachment of hemicelluloses to microfibrils.