Crosswordese is the group of words frequently found in US crossword puzzles but seldom found in everyday conversation. The words are usually short, three to five letters, with letter combinations which crossword constructors find useful in the creation of crossword puzzles, such as words that start and/or end with vowels, abbreviations consisting entirely of consonants, unusual combinations of letters, and words consisting almost entirely of frequently used letters. Such words are needed in almost every puzzle to some extent. Too much crosswordese in a crossword puzzle is frowned upon by cruciverbalists and crossword enthusiasts.

Knowing the language of ‘crosswordese’ is helpful to constructors and solvers alike. According to Marc Romano,[1] "to do well solving crosswords, you absolutely need to keep a running mental list of "crosswordese", the set of recurring words that constructors reach for whenever they are heading for trouble in a particular section of the grid."

Computers and the Internet 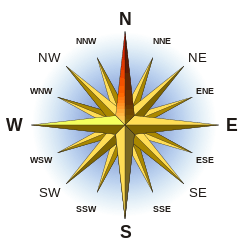 Directions on the mariner's compass (divided into 32 directions) may also be encountered, although generally clued more explicitly:

(Note: The popularity of certain names used in crosswordese may wane with the passing of time. For instance, "Ito" -- as in Robert Ito, a Canadian-born actor of Japanese descent who was a regular on Quincy, M.E. from 1976 to 1983—continued to be a popular crosswordese reference throughout most of the 1980s. Yet, although he has remained active professionally, and the name got reexposed in the 1990s due to judge Lance Ito's presiding over the O. J. Simpson murder case, the appearance of the name in today's crosswords is a rare occurrence.)

Many puzzles ask for Roman numerals either as answers or as portions of answers. For instance:

For numerals representing values equal to or greater than 4000, a line is placed above the numeral. The following table shows the numerals used in crossword puzzles.

For those who are curious, the chart below shows numeral values up to 900,000.

Use of medieval Roman numerals (an informalized system that spanned most of the Latin alphabet) is almost unheard of.

Titles used by royalty and the nobility