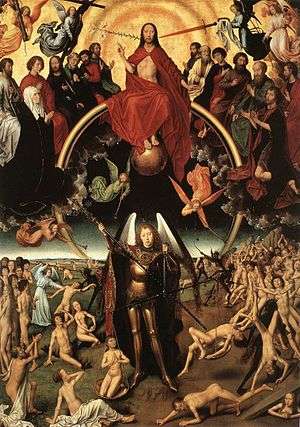 "Dies Irae" (Day of Wrath) is a Latin hymn attributed to either Thomas of Celano of the Franciscan Order (1200 – c. 1265)[1] or to Latino Malabranca Orsini (†1294), lector at the Dominican studium at Santa Sabina, the forerunner of the Pontifical University of Saint Thomas Aquinas, Angelicum in Rome.[2] The hymn dates from at least the thirteenth century, though it is possible that it is much older, with some sources ascribing its origin to St. Gregory the Great (d. 604), St. Bernard of Clairvaux (1090-1153), or St. Bonaventure (1221-1274).[1]

It is a medieval Latin poem characterized by its accentual stress and its rhymed lines. The metre is trochaic. The poem describes the day of judgment, the last trumpet summoning souls before the throne of God, where the saved will be delivered and the unsaved cast into eternal flames.

The hymn is best known from its use as a sequence in the Roman Catholic Requiem Mass (Mass for the Dead or Funeral Mass). An English version is found in various Anglican Communion service books.

The melody is one of the most quoted in musical literature, appearing in the works of many diverse composers.

Use in the Roman liturgy

The "Dies Irae" was used in the Roman liturgy as the sequence for the Requiem Mass for centuries, as evidenced by the important place it holds in musical settings such as those by Mozart and Verdi. It appears in the Roman Missal of 1962, the last edition before the implementation of the revisions that occurred after the Second Vatican Council. As such, it is still heard in churches where the Tridentine Latin liturgy is celebrated. It also formed part of the traditional liturgy of All Souls' Day.

In the reforms to the Roman Catholic liturgy ordered by the Second Vatican Council, the "Consilium for the Implementation of the Constitution on the Liturgy", the Vatican body charged with drafting and implementing the reforms (1969–70), eliminated the sequence as such from funerals and other Masses for the Dead. A leading figure in the post-conciliar liturgical reforms, Archbishop Annibale Bugnini, explains the rationale of the Consilium:

They got rid of texts that smacked of a negative spirituality inherited from the Middle Ages. Thus they removed such familiar and even beloved texts as the "Libera Me, Domine", the "Dies Irae", and others that overemphasized judgment, fear, and despair. These they replaced with texts urging Christian hope and arguably giving more effective expression to faith in the resurrection.[3]

The "Dies Irae" remains as a hymn ad libitum in the Liturgy of the Hours during the last week before Advent, divided into three parts for the Office of Readings, Lauds and Vespers.[4]

The Latin text below is taken from the Requiem Mass in the 1962 Roman Missal. The first English version below, translated by William Josiah Irons in 1849, albeit from a slightly different Latin text, replicates the rhyme and metre of the original.[5][6] This translation, edited for more conformance to the official Latin, is approved by the Catholic Church for use as the funeral Mass sequence in the liturgy of the Anglican ordinariate.[7] The second English version is a more formal equivalence translation.

Because the last two stanzas differ markedly in structure from the preceding stanzas, some scholars consider them to be an addition made in order to suit the great poem for liturgical use. The penultimate stanza Lacrimosa discards the consistent scheme of rhyming triplets in favor of a pair of rhyming couplets. The last stanza Pie Iesu abandons rhyme for assonance, and, moreover, its lines are catalectic.

In the liturgical reforms of 1969–71, stanza 19 was deleted and the poem divided into three sections: 1–6 (for Office of Readings), 7–12 (for Lauds) and 13–18 (for Vespers). In addition "Qui Mariam absolvisti" in stanza 13 was replaced by "Peccatricem qui solvisti" so that that line would now mean, "You who freed/absolved the sinful woman". In addition, a doxology is given after stanzas 6, 12 and 18:[4]

The text of the sequence is found, with slight verbal variations, in a 13th-century manuscript in the Biblioteca Nazionale at Naples. It is a Franciscan calendar missal that must date between 1253 and 1255 for it does not contain the name of Clare of Assisi, who was canonized in 1255, and whose name would have been inserted if the manuscript were of later date.

A major inspiration of the hymn seems to have come from the Vulgate translation of Zephaniah 1:15–16:

From the Jewish liturgy, the prayer Unetanneh Tokef appears to be related: "We shall ascribe holiness to this day, For it is awesome and terrible"; "the great trumpet is sounded", etc.

A number of English translations of the poem have been written and proposed for liturgical use. A very loose Protestant version was made by John Newton; it opens:

Day of judgment! Day of wonders!
Hark! the trumpet's awful sound,
Louder than a thousand thunders,
Shakes the vast creation round!
How the summons will the sinner's heart confound!

Jan Kasprowicz, a Polish poet, wrote a hymn entitled "Dies irae" which describes the Judgment day. The first six lines (two stanzas) follow the original hymn's metre and rhyme structure, and the first stanza translates to "The trumpet will cast a wondrous sound".

The American writer Ambrose Bierce published a satiric version of the poem in his 1903 book Shapes of Clay, preserving the original metre but using humorous and sardonic language; for example, the second verse is rendered:

Ah! what terror shall be shaping
When the Judge the truth's undraping –
Cats from every bag escaping!

Rev. Bernard Callan (1750–1804), an Irish priest and poet, translated it into Gaelic around 1800. His version is included in the Gaelic prayer book, The Spiritual Rose.[8]

The words of "Dies Irae" have often been set to music as part of the Requiem service. In some settings, it is broken up into several movements; in such cases, "Dies Irae" refers only to the first of these movements, the others being titled according to their respective first words.

The original setting was a sombre plainchant (or Gregorian chant). In four-line neumatic notation, it begins:

The earliest surviving polyphonic setting of the Requiem by Johannes Ockeghem does not include a Dies Irae. The first polyphonic settings to include the Dies Irae are by Engarandus Juvenis (c. 1490) and Antoine Brumel (1516) to be followed by many composers of the renaissance. Later many notable choral and orchestral settings of the Requiem Mass, including the Dies Irae, were made by composers such as Wolfgang Amadeus Mozart (incomplete, lacking the last three lines: finished by Franz Xaver Süssmayr), Hector Berlioz, Giuseppe Verdi, Gaetano Donizetti, and Igor Stravinsky.

The traditional Gregorian melody has been used as a theme or musical quotation in many classical compositions, film scores, and popular works, including: