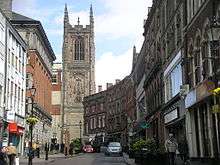 The cathedral from Irongate 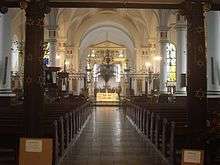 Interior of the nave 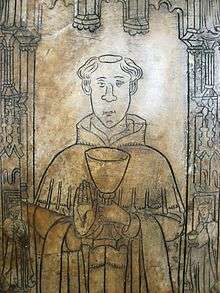 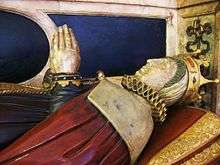 Tomb effigy of Bess of Hardwick (Elizabeth, Countess of Shrewsbury) 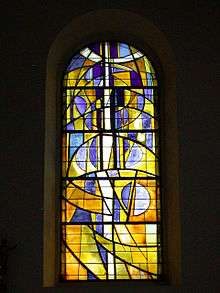 Derby Cathedral SE window. One of a pair of windows designed by Ceri Richards (1965) symbolising "All Saints" and "All Souls" 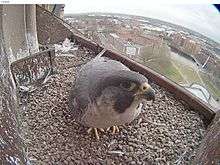 The Cathedral of All Saints (known as Derby Cathedral), is a cathedral church in the city of Derby, Derbyshire, England. It is the seat of the Bishop of Derby.

The church was founded in the mid-10th century as a royal collegiate church. It became a cathedral in 1927. The main body of the church as it stands today is a Neoclassical rebuilding by James Gibbs, completed in 1725. The tower dates from the 16th century, and a retrochoir was added in the 20th century.

The original church was probably founded by King Edmund I in about 943 as a royal collegiate church; however, no traces of its structure survive. According to the Domesday assessors, it belonged to the King, and was served by a college of seven priests.[2]

The current cathedral dates from the 14th century, although it appears to be based on an earlier medieval building, which drawings show was about the same size as the present church. It may be that it became structurally unstable and was pulled down. The 212-foot (65 m)[2][3] tower dates from 1510 to 1532 and was built in the popular Perpendicular Gothic style of the time. Twelve large carved grotesque animal figures top the tower, three per face, whilst the carved heads of two green men adorn either side of the main West Door. The sandstone used in the tower's construction is Ashover Grit, sourced from nearby Duffield Bank quarry. 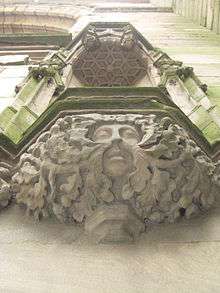 One of two carved heads of Green Men, positioned either side of the main west entrance of Derby Cathedral.

Under the Protestant persecutions of Queen Mary, Joan Waste was tried for heresy at the cathedral in 1556. The execution took place on the Burton Road in Derby.[4]

The fabric of the church appears to have severely deteriorated from the middle of the 17th century, and was in a ruinous state by its end. In February 1723, desirous of a new building, the vicar Dr. Michael Hutchinson unilaterally decided to demolish the church and employed a gang of workmen to accomplish the task overnight. Accepting the fait accompli handed to them, the Corporation of Derby then headed the subscription list for a new church to be built. A plaque within the South Aisle marks Dr Hutchinson's own significant financial contribution to this fund, although raising the funds may well have affected his health. Encountering numerous disputes, Hutchinson eventually resigned in 1728, dying some eighteen months later with numerous outstanding debts.

With the original 1530s tower remaining standing, the rest of the church was rebuilt to a Neo-Classical design of 1725 by James Gibbs. In his Book of Architecture, Gibbs wrote of All Saints, "It is the more beautiful for having no galleries, which, as well as pews, clog up and spoil the insides of churches", and noted that "the plainness of this building makes it less expensive, and renders it more suitable to the old steeple".[5] To offset the rather austere interior, Gibbs introduced a wrought-iron screen which extended across the entire width of the church. It was built by the local iron-smith and gate-maker, Robert Bakewell, but was not completed until five years after the newly rebuilt church was opened. Its first sermon was preached on 25 November 1725.[6]

The building, previously known as All Saints' Church, became a cathedral by Order in Council on 1 July 1927.[7][8] The church was later extended eastwards with the addition of a retrochoir designed by Sebastian Comper, constructed between 1967 and 1972.[9] It is a Grade I listed building.[10]

The Cathedral's treasures include the 18th-century wrought iron rood screen by Robert Bakewell, for which he charged the church £157.10.0d;[11] the memorial to Bess of Hardwick; and the Cavendish brasses, including those of Henry Cavendish and Georgiana Spencer, the wife of one of the Dukes of Devonshire. The entrance gates are also by Robert Bakewell, but these were only moved to the cathedral from St Mary's Gate in 1957.[2] The entrance gates were refurbished in 2012 and renamed the Queen Elizabeth II Gates to celebrate the Queen's Diamond Jubilee.[12] Notable 20th-century additions are the stained-glass windows designed by Ceri Richards, and the bronze crucifix by Ronald Pope.[2]

In 1927 a new clock was installed by John Smith and Sons, Derby clockmakers, replacing one reputed to have been made by George Ashmore in 1738, but by then so worn as to be beyond its useful life. Until March 1976 this timekeeper and associated parts had been mechanically driven by heavy weights which had to be wound manually, some of them daily. This work had been undertaken by John Smiths for many years, but rising costs caused the authorities to install an automatic winding mechanism to both the clock and the carillon which sounds the bells.[13]

Derby Cathedral's clock has two dials, one facing West along St Mary's Gate, and one facing South down Irongate. Both are of stone and are 8 feet in diameter. They were restored and gilded in 1964, then again in the early 21st century. The 1964 restoration proved beyond doubt that the long metal tubes driven through the tower walls to operate the clock mechanism were actually gun barrels (cavalry carbines) dating from the 1745 'uprising' of Bonnie Prince Charlie.[13]

The carillon is the mechanical instrument which drives the tunes played upon the Cathedral's bells each day. They were installed by John Smith of Derby in 1931 to replace a machine of similar design, dating from the 17th century and subsequently enhanced towards the end of the 17th century by Sorocold, a Derby Millwright. The current machine plays a tune three times a day, and the seven tunes it plays are changed automatically each day. It is known that the tunes of the original machine were varied over the years, first by John Whitehurst at various times between 1745 and 1762, and then by John Smith in 1873. There is documentary evidence to show that John Whitehurst was paid £3.3.0d for winding and care of the clock and carillon, although he is known to have paid from this sum the amount of £1.11.6d to a Mr Frost who did the actual daily winding of the carillon.[13]

On 3 July 1976 one of the less well-known carillon tunes was replaced with the melody of "The Derby Ram", a regimental march associated with the Sherwood Foresters so that it would become a permanent reminder of the Regiment's association with the Town and County of Derby.[13]

The tunes are currently played at 9am, noon and 6pm as follows:

They can be listened to live on a local webcam feed. (The previous carillon played at 3,6,9,and 12 both night and day.)

Derby Cathedral has the oldest ring of ten bells in the world. Most of them have been there since 1678 when the number of bells was increased from six to ten. The largest bell weighs 19 cwt (965 kg), its note is D-flat and it is over 500 years old, older than the tower itself.[2] It is believed that it came from Dale Abbey at the Dissolution of the Monasteries. The youngest bell, no. 3, is dated 1693, so all the bells are over 300 years old. Bell no. 8 was in Ashbourne Parish church until 1815. A carillon in the tower uses the same bells to provide a tune at 9 am, 12 pm, and 6 pm.[14] The bells used to hang in a wooden frame. When the church became a cathedral in 1927, the bells were retuned and rehung at a lower level in a new metal frame.

On 28 October 1732, a Frenchman called Gillinoe 'flew' down on a rope from the top of All Saints steeple. He did this on a number of occasions, landing variously at St Michael's church and at the bottom of St Mary's Gate. On one occasion an ass was sent down the rope, but it broke under its weight and a number of onlookers were injured.[15]

On 25 July 1940 a wartime barrage balloon broke loose from its moorings during a heavy storm, and as it floated past its chain caught round one of the pinnacles on the tower and demolished the top half of the pinnacle.[16][17]

In late 2005 it was discovered that a pair of peregrine falcons had taken up residence on the cathedral tower. In 2006 a nesting platform was installed, and they nested here in April. The same pair have successfully reared chicks every year since then, up to and including 2016.[18] Webcams were installed in 2007, 2008 and 2013 to enable the birds to be seen at close range without being disturbed by human contact.

In 2009, more than 150 members of the Derby Mountain Rescue Team abseiled down the tower for charity.[19] Further sponsored abseils have taken place every year since, and in 2012 this included Assistant Curate, Andy Trenier, and the Dean of Derby Cathedral, Dr John Davies.[20][21]

The Derby Cathedral Centre is opposite the west doors on Irongate. It was opened by Queen Elizabeth II. It includes a cafe, a bookshop and an exhibition space, featuring work by local artists.[22] The Cathedral Centre also houses the cathedral offices and meeting rooms.[23] 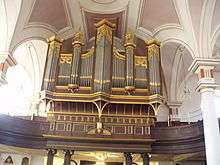 In 1939, an organ was installed by John Compton of London, although it did not gain its impressive case (designed by Sebastian Comper) until 1963. It is played from a four manual console in the Consistory Court area of the Cathedral. This was overhauled in 1992.[25] In 1973, an additional instrument was installed in the new retro-choir (east end) by Cousans of Lincoln.[26]

Between April 2013 and December 2014, Canon Peter Gould undertook a musical pilgrimage of 270 churches, in which he raised £7,478.78 over 39 tour days, performing to a collective audience of 3,598 people, plus 5 dogs and one cat. During the tour three church organs were found to be in a pitiful state.[27]