Manchester Cathedral, formally the Cathedral and Collegiate Church of St Mary, St Denys and St George,[1][lower-alpha 1] in Manchester, England, is the mother church of the Anglican Diocese of Manchester, seat of the Bishop of Manchester and the city's parish church. It is on Victoria Street in Manchester city centre.

The main body of the cathedral is in the Perpendicular Gothic style. James Stanley (warden 1485–1506) was responsible for commissioning the late-medieval wooden furnishings, including the pulpitum, choir stalls and the nave roof supported by angels with gilded instruments. The medieval church was extensively refaced, restored and extended in the Victorian period, and again following bomb damage in the 20th century. The cathedral is one of fifteen Grade I listed buildings in Manchester.

The origins of Manchester's first churches are obscure. The Angel Stone, a small carving of an angel with a scroll was discovered in the wall of the cathedral's south porch providing evidence of an early Saxon church has been dated to around 700 AD is preserved in the cathedral. Its Old English inscription translates as "into thy hands, O Lord, I commend my spirit".[3][lower-alpha 2] The first church, possibly sited on or near the site of St Ann's Church, was destroyed by Danish invaders in 923 and a church dedicated to St Mary, built by King Edward the Elder,[5] possibly where St Mary's Gate joins Exchange Street,[6] was mentioned in the Domesday Book in 1086.[5] The Domesday Book entry for Manchester reads "the Church of St Mary and the Church of St Michael hold one carucate of land in Manchester exempt from all customary dues except tax".[7][lower-alpha 3]

Construction of the predecessor parish church between the Rivers Irk and Irwell and an ancient watercourse crossed by the Hanging Bridge started in 1215 within the confines of the Baron's Court beside the manor house on the site of Manchester Castle.[9] The lords of the manor were the Grelleys whose coat of arms is still associated with the cathedral. The Grelleys acted as stewards, building and endowing the first chancery, the St Nicholas Chancery. In 1311, the Grelley estate passed by marriage to the de la Warres. In 1349 the St Nicholas Chancery was endowed by the de Traffords. In 1382 Thomas de la Warre, became its rector.[10]

The church had a six-bay aisled nave and six-bay chancel with aisles and a west tower in the perpendicular style of the late-medieval period.[9]

Thomas de la Warre became Baron de la Warre in 1398. A priest for more than 50 years, he was granted a licence from King Henry V and Pope Martin V to establish a collegiate church in Manchester in 1421. The college was established by royal charter, with a warden, eight fellows, four singing clerks and eight choristers. The parish church was dedicated to St Mary and to that dedication were added St George, the patron saint of England, and St Denys, the patron saint of France, perhaps reflecting de la Warre's French heritage,[10] or Henry V's claim to the French throne.[9] The college of priests was housed in new buildings on the site of the former manor house that survive as Chetham's Library paid for by de la Warre. He appointed John Huntingdon as the college's first warden who, between 1422 and 1458, rebuilt the eastern arm of the parish church to provide the collegiate choir. Huntington is commemorated in a rebus, carvings of a man hunting and a man with a tun (barrel of ale), on either side of the arch accessing the Lady Chapel.[10] The church's 14th-century west tower and Lady Chapel were incorporated into the current structure although little or no fabric of that date is still visible.

The nave supported by angel minstrels viewed from the west door

Traditionally the third warden, Ralph Langley (1465–1481), is credited with rebuilding the nave but the nave and choir were substantially reconstructed again by James Stanley a few years later, when he raised the clerestory and provided the richly decorated timber roofs and choir stalls. His stepmother, Lady Margaret Beaufort was mother of Henry VII and through their alliance with the Tudor dynasty the Stanley's acquired fabulous wealth and access to architects and craftsmen working on royal commissions. On stylistic grounds, the arcades and clerestory of the cathedral are attributed to John Wastell, the architect for the completion of Kings College Chapel. The choir stalls, carved at the workshop of William Brownflet of Ripon, are the finest of a series which includes the surviving stalls at Ripon Cathedral, Beverley Minster and Bridlington Priory. The carving of the misericord seats is exceptionally fine.[10] James Stanley was responsible for the embellishment of the nave roof with supports in the form of fourteen life-size angel minstrels, each playing a different late-medieval instrument; and for the endowment of his own chantry chapel (now destroyed) at the north-east corner, in which he was buried in 1515.

In the early 16th century an almost complete sequence of chantry chapels was constructed along the north and south sides of the church creating a double aisle around the parochial nave, which is consequently much wider than it is long. Manchester is commonly claimed to have the widest nave of any cathedral in England. On the south side, the oldest of the chantry chapels, the St Nicholas Chapel, was rebuilt by the de Traffords in 1470. St George's Chapel was endowed by William Galley in 1503 and Richard Beswick endowed the Jesus Chapel in 1506. On the north side, William Radcliffe of Ordsall Hall endowed the Holy Trinity Chapel in the northwest corner in 1498. Huntington left money and land for the St James' Chapel which was built in 1507. The largest of the chantries, the St John the Baptist Chapel, was begun by James Stanley the Bishop of Ely in 1513. A chapel to commemorate James Stanley, the Ely Chapel, has been demolished.[11]

The college was dissolved in 1547 in the reign of Edward VI by the Chantries Act, but refounded by his sister Mary. Its future was uncertain when Elizabeth I succeeded in 1559, but was assured when she granted a new charter in 1578, allowing a warden, four fellows, two chaplains, four singing men and four choristers. The dedication of the college (but not the church) was changed to the college of Christ.[2] Manchester and Southwell Minster were the only two medieval collegiate foundations where daily choral worship was maintained after the Reformation until they were joined by Ripon when its collegiate foundation was restored in 1607. John Dee, magus and astrologer for Elizabeth I was warden from 1595 to 1608 and occupied the wardens' lodgings now incorporated into Chetham's Library. The present charter, the fourth, was granted by Charles I preserving the dedication of the college to Christ.[2]

The chapels are no longer demarcated as the screens that divided them have been removed giving the appearance of double aisles on either side of the nave.[11] 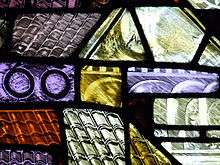 Detail of modern stained glass in the cathedral

A view of the nave inside Manchester Cathedral

Under the Cathedrals Act 1840, the warden and fellows of the collegiate church were translated into a dean and canons in preparation for becoming the cathedral of the new Manchester Diocese which came into effect in 1847. The building was extensively renovated in 1882.[2]

During the Manchester Blitz in 1940, a German bomb severely damaged the cathedral demolishing the medieval lady chapel and James Stanley's chantry chapel. It took almost 20 years to complete the repairs, in the course of which the Guy Chapel was rebuilt to the designs of Hubert Worthington. The cathedral was again damaged in the IRA bombing in June 1996.

The cathedral houses extensive parish and historical archives, dating back to 1421. In 2003, a project began to provide an exhaustive catalogue of the archive's contents to the public. The cathedral was granted Grade I listed building status in January 1952.[12] Grade I structures are considered to be "buildings of exceptional interest".[13]

The cathedral is constructed of two types of stone. The dark brown sandstone walls are of Collyhurst sandstone formed in the early Permian period and its floors of limestone from the Peak District which contains crinoid fossils.[3]

By the 1840s the external and internal stonework was in a poor state, partly due to the poor weathering qualities of the Collyhurst sandstone, but also because of an ill-advised attempt to lighten the interior by coating the internal surfaces of the nave with Roman cement by John Palmer. The external stonework was replaced between 1850 and 1870 in a restoration by J. S. Crowther, who also replaced the internal stonework of the nave walls and arcades. The west tower was heightened in 1868 by J.P. Holden, who also replaced its external stonework. Basil Champneys added the vestry and porches in 1898.[14] Consequently, the cathedral gives the impression of being a 19th-century structure.

To accommodate upgrading work on the cathedral's heating system, in 2013 a temporary wooden cathedral was built on Victoria Street to allow worship to take place.[15]

The cathedral has thirty 16th-century misericords, considered to be among the finest in Europe. They are similar in style to those at Ripon Cathedral and Beverley Minster. Although Manchester's are of a later date, they were probably carved by the same school at Ripon. One of the most notable is N-08, the earliest known mention of backgammon in the UK.

All the Victorian stained glass was destroyed during the Manchester Blitz in 1940. Until the late 1960s, only two windows had been replaced, notably the Fire Window by Margaret Traherne (1966). The dean and chapter commissioned Antony Holloway to prepare a scheme for reglazing the cathedral, with priority to the five western windows: St George (1973), St Denys (1976), St Mary (1980), The Creation (1991) and The Apocalypse (1995). To commemorate the restoration of the cathedral following an IRA bomb in 1996, the Healing Window by Linda Walton was installed in 2004.

The ten bells in the cathedral tower hung for change ringing were cast by Gillett & Johnston in 1925. The tenor (largest) bell weighs 1.3 tonnes and is tuned to the key of D. The bells are rung for church service on Sunday mornings and on special occasions including a visit by HM the Queen to distribute the Royal Maundy. One of the recipients was the tower captain, Roland Eccles, for 35 years of service to ringing and the cathedral community.

The visitor centre by the cathedral's south porch costing £3 million was opened by Queen Elizabeth II. It has a shop and an exhibition room.[17] The main attraction is the 15th-century Hanging Bridge,[18] a scheduled monument,[19] that was once the main approach to the church but was buried for more than 100 years.[18]

Manchester Grammar School's Founders' Day Service is held annually in the cathedral. Before moving to Fallowfield in the 1930s, the school occupied the building now used by Chetham's School of Music.

Since 2000, the cathedral has sponsored the International Religious Poetry Competition. Judges have included Michael Schmidt, Michael Symmons Roberts and Linda Chase. In 2010 the cathedral re-established its Young Poets' Competition, a national competition open to all schools and all children from Key Stage 1-5. On 23 January 2010, the cathedral announced the appointment of its first Poet-in-Residence, Rachel Mann . Rachel Mann is also Priest-in-Charge of the Church of St Nicholas, Manchester.

On 21 October 2010, the cathedral hosted the inaugural Manchester Sermon. Developed in collaboration with the Manchester Literature Festival, the event was aimed at revitalising the sermon as a literary form. The inaugural sermon was delivered by the internationally known novelist Jeanette Winterson.

On 3 July 2014, the cathedral hosted an art exhibition by the portuguese artist Cristina Rodrigues titled Women From My Country. The exhibition consisted of The Queen, The Blanket and Enlightenment, three large-scale art installations. The artwork Enlightenment would be cover to the 2016 January/February issue of Sculputre Magazine with a photo taken during its exhibition on the cathedral.