Christ Church Cathedral is the cathedral of the diocese of Oxford, which consists of the counties of Oxford, Buckingham and Berks. It is also the chapel of Christ Church at the University of Oxford. This dual role as cathedral and college chapel is unique in the Church of England.[1] 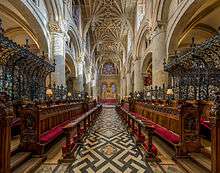 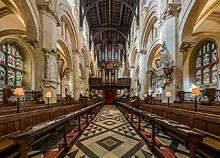 The choir, looking towards the organ and entrance

The cathedral was originally the church of St Frideswide's Priory. The site was historically presumed to be the location of the nunnery founded by St Frideswide, the patron saint of Oxford, and the shrine now in the Latin Chapel, originally containing relics translated at the rebuilding in 1180, was the focus of pilgrimage from at least the 12th until the early 16th century.[2]

In 1522, the priory was surrendered to Cardinal Wolsey, who had selected it as the site for his proposed college. However, in 1529 the foundation was taken over by King Henry VIII. Work stopped, but in June 1532 the college was refounded by the King. In 1546, Henry VIII transferred to it the recently created see of Oxford from Osney. The cathedral has the name of Ecclesia Christi Cathedralis Oxoniensis, given to it by King Henry VIII's foundation charter.

There has been a choir at the cathedral since 1526, when John Taverner was the organist and also master of the choristers. The statutes of Cardinal Wolsey's original college, initially called Cardinal College, mentioned 16 choristers and 30 singing priests.

Christ Church Cathedral has been said to be the smallest cathedral in England, and although it once was, there are now smaller cathedrals, as several parish churches were elevated to cathedral status in the 20th century.[3]

The nave, choir, main tower and transepts are late Norman. There are architectural features ranging from Norman to the Perpendicular style and a large rose window of the ten-part (ie botanical) type.

The organ is a 43-rank, four-manual and pedal instrument built in 1979 by Austrian firm Rieger Orgelbau.[8]

First among the notable organists of Christ Church Cathedral is the Renaissance composer John Taverner, who was appointed as the first organist by Cardinal Wolsey in 1526. Other organists (and directors of the choir) have included Basil Harwood, Thomas Armstrong, W. H. Harris, Simon Preston, Francis Grier and Nicholas Cleobury. The post of organist is currently held by Stephen Darlington. (As in many English cathedrals, the organist is also director of the choir and much of the organ playing is delegated to the sub-organist or organ scholar.)

The main choir, the Christ Church Cathedral Choir, consists of 12 men (6 professional "lay-clerks" and 6 student "academical clerks") and 16 choristers (boys aged 7 – 13), and is directed by Stephen Darlington. They sing in university term time, at Christmas and Easter, and have an extensive touring and recording programme.

The Cathedral Singers consists of volunteers and is currently directed by James Potter. They are usually in residence outside of term time when the choristers and academical clerks of the main choir are on holiday.

The college choir sings every 1–2 weeks in term time and is made up of current undergraduates and postgraduates from the college. 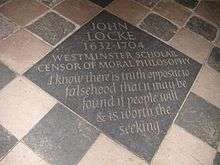