The Cathedral Church of the Holy Spirit, Guildford is the Anglican cathedral at Guildford, Surrey, England. Designed by Sir Edward Maufe and built between 1936 and 1961, it is the seat of the Diocese of Guildford.

Guildford was made a diocese in 1927, covering most of Surrey. Work began nine years later on its cathedral, which was to be a lead centre of worship and community events venue. The diocese chose Sir Edward Maufe as its architect and the foundation stone was laid by Dr Cosmo Gordon Lang, Archbishop of Canterbury in 1936.[1] Construction was intended to span many years to allow necessary funds to be raised, but building work had to be suspended during the Second World War. In the meantime Guildford's restored medieval Holy Trinity Church served as pro-cathedral.[1] In 1952 Walter Boulton, who had ministered mostly in India, was made provost (head priest at the pro-cathedral and pastor of the parish), and revitalized the fund-raising for the new cathedral. The building could not be consecrated until 17 May 1961. When it was completed sufficiently for public worship, another cleric was chosen as first dean of the cathedral by the bishop, after consultation with various benefactors and influential clergy within Anglicanism.[2]

In the 1950s a "buy a brick" scheme was used to raise funds for construction, to great success. Each brick cost 2s 6d and entitled the buyer to sign their name on the brick. The Queen and Prince Philip both signed bricks, which are on display inside the cathedral.

It stands in a commanding spot on Stag Hill — so named because the Kings of England used to hunt there — and its solid red brick outline is visible for miles around; it immediately overlooks the University of Surrey. Its bricks are made from clay taken from the hill on which it stands. 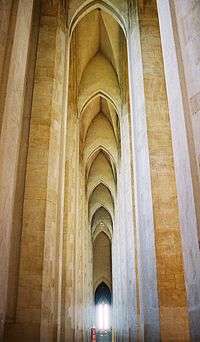 Guildford Cathedral The vaulting of the South Nave side aisle

Writing in 1932, Sir Edward Maufe said: ‘The ideal has been to produce a design, definitely of our own time, yet in the line of the great English Cathedrals; to build anew on tradition, to rely on proportion, mass, volume and line rather than on elaboration and ornament.'[1] Pevsner Architectural Guides described the building as 'sweet-tempered, undramatic Curvilinear Gothic', and the interior as 'noble and subtle.'

The tower is 160 feet (49 m) high,[1] and contains twelve bells, ten of which were cast by Mears and Stainbank in 1965. The bells were augmented to 12 with two Whitechapel trebles in 1975. The largest bell weighs 30cwt (just over 1.5 tonnes) and is tuned to the key of D. At the top of the tower stands a 15-foot (4.6 m) gilded angel, which turns in the wind. Inside, the cathedral appears to be filled with light, with pale Somerset limestone pillars and white Italian marble floors. It is a Grade II* listed building.[3]

The angel on the top of the tower was given in memory of Sgt. Reginald Adgey-Edgar of the Intelligence Corps, who died on active service in 1944 during World War II.[4] The supporting pole for the angel houses mobile phone antennas.[5]

The wooden cross which stands outside the eastern end of the cathedral was originally erected in 1933 before construction work began in order to mark the site of the new cathedral. Known as the Ganges Cross, it is made from timbers of Burma teak from the battleship HMS Ganges (1821). The ship's emblem - an elephant - is embedded in the wood.[6]

In 2008 the cathedral opened a garden, named the Seeds of Hope Children's Garden,[7] designed to help children and young people explore feelings of loss of all kinds. It is situated in the grounds at the east end of the cathedral and incorporates four areas, one for each season, together with a labyrinth and a bronze sculpture by Christine Charlesworth of two life-sized children.[8] 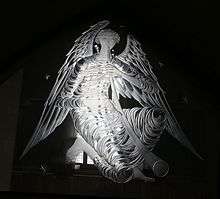 One of three carved glass angels above the south porch doors at Guildford Cathedral, by John Hutton

The cathedral has carved glass works by New Zealand-born artist John Hutton. One set adorns the panel at the west entrance; the other is above the internal doors to the south porch.

The cathedral organ was installed in 1961 by the Liverpool firm of Rushworth and Dreaper. It is a reconstruction of an organ dating from c. 1866, previously in the Rosse Street Baptist Church in Shipley, West Yorkshire.[14]

Organists at Guildford Cathedral have included the composer Philip Moore.

Scenes in the classic horror film The Omen were filmed at the Cathedral.[15]