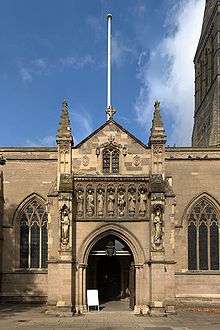 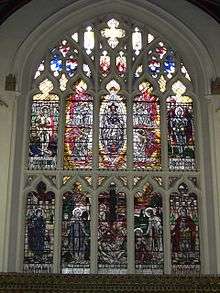 The Cathedral Church of St Martin, Leicester, usually known as Leicester Cathedral, is a Church of England cathedral in the English city of Leicester and the seat of the Bishop of Leicester. The church was elevated to a collegiate church in 1922 and made a cathedral in 1927 following the establishment of a new Diocese of Leicester in 1926.

The remains of King Richard III were buried in the cathedral in 2015 after being discovered nearby.

A church dedicated to St Martin has been on the site for about a thousand years, being first recorded in 1086 when the older Saxon church was replaced by a Norman one. The present building dates to about that age, with the addition of a spire and various restorations throughout the years. Most of what can be seen today is a Victorian restoration by architect Raphael Brandon. The cathedral of the former Anglo-Saxon diocese of Leicester was on a different site.[1]

A cenotaph memorial stone to King Richard III of England was until recently located in the chancel; it was replaced by the tomb of the king himself. The monarch, killed in 1485 at the Leicestershire battlefield of Bosworth Field, had been roughly interred in the Greyfriars, Leicester. His remains were exhumed from the Greyfriars site in 2012 and publicly identified in February 2013.[2][3] Sir Peter Soulsby, Mayor of Leicester, and David Monteith, the cathedral's canon chancellor, announced the king's body would be reinterred in Leicester Cathedral in 2015. This was carried out on 26 March.

The East Window was installed as a monument to those who died in World War I. The highest window contains a sun-like orb with cherubs radiating away from it. In the centre Jesus sits holding a starry heaven in one hand with one foot on a bloody hell. Surrounding Jesus are eight angels whose wings are made from a red glass. To the far right stands St Martin, who stands on the tail of a dragon. The dragon goes behind Jesus and can be seen re-emerging under the feet of St George who stands on its head. On the bottom row can be seen from left St Joan of Arc, Mary, Jesus with crying angels, Mary Magdalene, James, and St Martin of Tours. The window includes an image of a World War I soldier..

The tower and spire were restored both internally and externally in 2004–5. The main work was to clean and replace any weak stonework with replacement stone quarried from the Tyne Valley. The cost was up to £600,000, with £200,000 being donated by the English Heritage, and the rest raised through public donations.[4]

The cathedral has close links with Leicester Grammar School which used to be located directly next to it. Morning assemblies would take place each week on different days depending on the school's year groups, and services were attended by its pupils. The relationship continues despite the school's move to Great Glen, about seven miles south of Leicester.[5][6]

In 2011, after extensive refurbishment, the cathedral's offices moved to the former site of Leicester Grammar School, and the building was renamed St Martin's House. The choir song school also relocated to the new building, and the new site also offers conference rooms and other facilities that can be hired out. The new building was officially opened by the Bishop of Leicester in 2011.[7]

In July 2014, the cathedral completed a redesign of its gardens, including installation of the 1980 statue of Richard III.[8] Following a judicial review decision in favour of Leicester, plans were made to reinter Richard III's remains in Leicester Cathedral, including a new tomb and a wider reordering of the cathedral interior. Reinterment took place on 26 March 2015 in the presence of Sophie, Countess of Wessex (representing the Queen) and Prince Richard, Duke of Gloucester.[9] 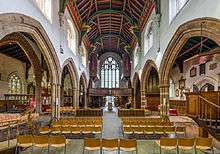 Leicester Cathedral is a Grade II* listed building comprising a large nave and chancel with two chancel chapels, along with a 220-foot high spire which was added in 1862. The building has undergone various restoration projects over the centuries, including work by the Victorian architect Raphael Brandon, and the building appears largely Gothic in style today. Inside the cathedral, the large wooden screen separating the nave from the chancel was designed by Sir Charles Nicholson and carved by Bowman of Stamford.[10][11] In 2015 the screen was moved eastward to stand in front of the tomb of Richard III, as part of the reordering of the Chancel by van Heyningen and Haward Architects.[12]

The Vaughan Porch which is situated at the south side of the church was designed by J. L. Pearson, who was also the architect of Truro Cathedral. It is named the Vaughan Porch because it was erected in memory of the Vaughans who served successively as vicars throughout a great part of the nineteenth century. The front of the porch depicts seven saintly figures set in sandstone niches, all of whom are listed below.[13]

The cathedral contains four separate chapels, three of which are dedicated to a different saint. St Katharine's and St Dunstan's Chapels act as side chapels and are used occasionally for smaller services and vigils. St George's Chapel, which is located at the back (or west) of the cathedral commemorates the armed services, and contains memorials to those from Leicestershire who have been killed in past conflicts. The new Chapel of Christ the King adjoins the East Window.

St Katharine's Chapel is located on the north side of the Cathedral to the left of the sanctuary. In the window above the altar is St Katharine, who was tied to a wheel and tortured (hence the firework named after her). Below this is a carved panel showing Jesus on the cross with Mary and John on either side of him. St Francis of Assisi and the 17th-century poet Robert Herrick are also pictured – indeed, the chapel is sometimes referred to as the "Herrick Chapel".

St Dunstan's Chapel, located on the other side of the chancel to St Katharine's Chapel, is specially put aside for people to pray in. A candle burns in a hanging lamp to show that the sacrament of Christ's body and blood is kept here to take to those who are too ill to come to church. The walls of the chapel are covered with memorials to people who have prayed in the chapel. St Dunstan was Archbishop of Canterbury in the 10th century, and scenes from his life are depicted in the south-east window.

St George's Chapel was the chapel of the Guild of St George. The effigy of England's national saint, on a horse, was kept here and borne through the streets annually on 23 April in a procession known as "riding the George". The legend of George killing a dragon is shown in one of the chapel's windows. The chapel, enclosed by a carved wooden screen, was reconstructed in 1921 and contains memorials to the men of the Royal Leicestershire Regiment. Here the battle honours of the Regiment and the names of those killed in the Crimean, South African and two World Wars are recorded and remembered.[14]

The new Chapel of Christ the King was created at the east end of the cathedral as part of the re-ordering work for the burial of Richard III.[12]

Leicester Cathedral follows the rites of the Church of England and uses the 1662 Book of Common Prayer for the main Choral Eucharist on Sunday.[15]

The Leicester Cathedral Choir is made up of the Boys Choir, the Girls Choir and the Cathedral Songmen. Boys and girls are recruited from schools throughout Leicester and Leicestershire, whilst many of the songmen originally joined the choir as trebles and have stayed on after their voice broke. The cathedral also offers scholarships worth around £1000 a year to gap year and university students at Leicester University and De Montfort University.[23] Whilst the choir occasionally produces CDs and other recordings, it is also one of the few cathedral choirs never to have appeared on BBC Radio 3's Choral Evensong. As part of the preparations for the reburial of King Richard III at Leicester Cathedral, British furniture designers Luke Hughes designed new choir and clergy furniture[24] from solid oak for a new choral layout within the nave.

The choir participates in regular festivals, with the annual RSCM Leicestershire festival in September often taking place in the cathedral itself. Each year during February the choir joins those of Derby and Coventry cathedrals and, more recently, Southwell Minster for what is known as the Midlands Four Choirs Festival. Hosting duties rotate among the four cathedrals, although the repertoire is chosen, and music conducted, by the directors of music of all participating choirs.

The cathedral choir tours abroad typically once every three to four years, and in both 1998 and 2005 they visited Japan. Other destinations abroad have included Rhode Island in the United States, Germany, and France. In other years, the choir has spent a week during the summer in residence at another English cathedral church, such as Lincoln, Wells, York and Chester.[25][26] The boys and girls choirs, as well as the younger songmen also spend five days in August at Launde Abbey, a retreat house in east Leicestershire.[27]

The present organ was installed by J. W. Walker & Sons Ltd in 1873 and since then has been rebuilt by Harrison and Harrison in 1929 and 1972. A specification of the organ can be found on the National Pipe Organ Register.[28]

Organists and directors of music

The tower of the cathedral has 13 bells (including a peal of 12). These can be heard on Thursday evenings and Sunday mornings, with peals being rung on special days. The tenor bell weighs 25-0-20.[32]

The following is the full list of the inscriptions on the thirteen bells. 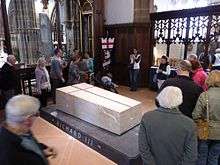 Richard III's tomb. The stone slab tapers both in height and width towards the east, evoking the idea of facing east in anticipation of the resurrection.[33]

On 26 March 2015, King Richard III was reburied in Leicester Cathedral.[34] The last funeral for an English monarch prior to this was for Edward VIII, who died (as Duke of Windsor) in 1972, 43 years before Richard's burial.

His cathedral tomb was designed by van Heyningen and Haward Architects [35] and made by James Elliott.[36] The tombstone is deeply incised with a cross, and consists of a rectangular block of pale Swaledale fossil stone, quarried in North Yorkshire. It rests on a low plinth of dark Kilkenny limestone incised with Richard’s name, dates and motto carved by Gary Breeze and Stuart Buckle. The plinth also carries his coat of arms in pietra dura by Thomas Greenaway.[37][38]

The remains of Richard III are in a lead ossuary, inside an English oak coffin crafted by Michael Ibsen, a direct descendant of Richard's sister Anne of York, and laid in a brick-lined vault below the floor, and below the plinth and tombstone.[38]