The Sena Empire (Bengali: সেন সাম্রাজ্য, Shen Shamrajjo) was a Hindu dynasty that ruled from Bengal through the 11th and 12th centuries. The empire at its peak covered much of the north-eastern region of the Indian subcontinent. The rulers of the Sena Dynasty traced their origin to the south Indian region of Karnataka.[1]

The dynasty's founder was Hemanta Sen, who was part of the Pala Empire until it began to weaken. Hemanta Sen usurped power and styled himself king in 1095 AD. His successor Vijay Sen (ruled from 1096 AD to 1159 AD) helped lay the foundations of the dynasty, and had an unusually long reign of over 60 years. Ballal Sena conquered Gaur from the Pala, became the ruler of the Bengal Delta, and made Nabadwip the capital as well. Ballal Sena married Ramadevi a princess of the Western Chalukya Empire which indicates that the Sena rulers maintained close social contact with south India.[2] Lakshman Sen succeeded Ballal Sena in 1179, ruled Bengal for approximately 20 years, and expanded the Sena Empire to Assam, Odisha, Bihar and probably to Varanasi. In 1203–1204 AD, the Turkic general Bakhtiyar Khilji attacked Nabadwip. Khilji defeated Lakshman Sen and captured northwest Bengal - although Eastern Bengal remained under Sena control.

The political space after the decline of the Pala power in Bengal was occupied by the Senas whose king Vijayasena succeeded in conquering a large part of Pala territory. The Senas were the supporters of orthodox Hinduism. The dynasty traces its origin to the South, to the Western Chalukya Empire of southern India.[3] Theres is a record of a Western Chalukya invasion during the reign of Someshvara I led by his son Vikramaditya VI who defeated the kings of Gauda and Kamarupa.[4][5] This invasion of the Kannada ruler brought bodies of his countrymen from Karnataka into Bengal which explains the origin of the Sena Dynasty.[3][4]

The founder of the Sena rule was Samantasena who described himself as a Kshatriya of Karnata (Karnataka). He himself stated that he fought the outlaws of Karnata and later turned an ascetic. The inscriptions of the Sena kings mention them as Brahma-Kshatriyas or Kshatriyas.[6] Otherwise, sources have identified them with the Vaidya as well as the Ambashtha caste or sub-caste, considered as a mixed caste, being born of Brahmin father and Vaishya mother,[6][7] and they married with and were identified with the Bengali Vaidyas (commonly known as Baidyas in Bengal) in Vaidya Kula-panjikas (family-tree accounts).[8]

Sena Dynasty had ruled Bengal for little over a century (c 1097-1225). The emergence of the dynasty, which supplanted the Palas in Bengal towards the close of 11th century A.D., had constituted a significant epoch in the history of ancient India. Taking advantage of the revolt of Samantachakra in Varendra during the reign of Mahipala II, Vijaysena, founder of the Sena dynasty, gradually consolidated his position in western Bengal and ultimately assumed an independent position during the reign of Madanapala. One important aspect of Sena rule in Bengal is that the whole territory of Bengal was brought under a single rule for the first time. It is likely impossible to provide definite information to the question as to how the family entered Bengal. The Sena records also are amazingly silent about this.

The Sena kings claim in their own inscriptions that they are Brahma-Kshatriyas. Their remote ancestor was one Virasena, whose name was supposed to have been mentioned in Puranas. The "Deopara Inscription" of the Senas also traces the Sena ancestry from Virasena. Since there are no authentic records available still, a keen controversy prevails among scholars regarding origin of the Senas.

Like the origin of the Senas, their early history or circumstances, which led them to concentrate in Bengal is also still unknown. It has been presumed by historians that the Senas came to Bengal on the eve of the invading army led by the Chalukya kings Vikramaditya VI and Someswara III. Some scholars have also suggested that when Rajendra Chola's army had invaded Bengal, the Senas had accompanied them. According to some other historians, a few Karnataka officials, who were subordinate to the Pala kings, had established their independent kingdom in the region of Radha, taking advantage of the weakness of the Pala powers. Those Karnataka chiefs might have arrived in Bengal in wake of the Chalukya invasion and had settled into a kingdom of their own. According to historians Samantasena was such a chief who had established his independent kingdom in the Radha region of Bengal.

Samantasena was a scion of the Sena family, who had distinguished himself through various warfares in South India. He had settled in Radha in Bengal, at an old age. He had also laid the foundation of the Sena family in Bengal. His son Hemantasena carved out an important kingdom in Radha, taking advantage of the decline of the Pala Empire. From their base in Radha, the Senas ultimately extended their powers over the whole of Bengal.[9] 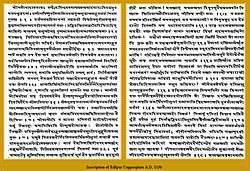 A copperplate was found in the Adilpur or Edilpur pargana of Faridpur District in 1838 A.D. and was acquired by the Asiatic Society of Bengal, but now the copperplate is missing from collection. An account of the copperplate was published in the Dacca Review and Epigraphic Indica. The copperplate inscription is written in Sanskrit and in Ganda character, and dated 3rd jyaistha of 1136 samval, or 1079 A.D. In the Asiatic Society’s proceeding for January 1838, an account of the copperplate states that three villages were given to a Brahman in the third year of Kaesava Sana. The grant was given with the landlord rights, which include the power of punishing the chandrabhandas or Sundarbans, a race that lived in the forest.[10] The land was granted in the village of Leliya in the Kumaratalaka mandala, which is situated in shatata-padamavati-visaya. The copperplate of Kaesava Sana records that the king Vallal Sena carried away, from the enemies, the goddesses of fortune on palanquins (Shivaka), which elephant tusk staff supported; and also states that Vallal Sena's son, Lakshman Sena (1179–1205), erected pillars of victory and sacrificial posts at Benaras, Allahbad, and Adon Coast of the South Sea. The copperplate also describes the villages with smooth fields growing excellent paddy, the dancing and music in ancient Bengal, and ladies adorned with blooming flowers. The Edilpur copperplate of Kaesava Sena records that the king made a grant in favor of Nitipathaka Isvaradeva Sarman for the inscae of the subha-varsha.

The Sena dynasty is famous for building Hindu temples and monasteries, which include the renowned Dhakeshwari Temple in what is now Dhaka, Bangladesh. In Kashmir, the dynasty also likely built a temple, which is ascribed to a Gaureshwara or Ballala Sena.[12]

The Sena rulers were also great patrons of literature. During the Pala dynasty and the Sena dynasty, major growth in Bengali was witnessed. Some Bengali authors believe that Jayadeva, the famous Sanskrit poet and author of Gita Govinda, was one of the Pancharatnas (five gems) in the court of Lakshman Sen. Dhoyin - himself an eminent court poet of Sena dynasty - mentions nine gems (ratna) in the court of Lakshmana Sen, among whom were: