Medieval Latin was the form of Latin used in the Middle Ages, primarily as a medium of scholarly exchange and as the liturgical language of Chalcedonian Christianity and the Roman Catholic Church, but also as a language of science, literature, law, and administration. Despite the clerical origin of many of its authors, medieval Latin should not be confused with Ecclesiastical Latin. There is no real consensus on the exact boundary where Late Latin ends and medieval Latin begins. Some scholarly surveys begin with the rise of early Ecclesiastical Latin in the middle of the 4th century, others around 500,[1] and still others with the replacement of written Late Latin by written Romance languages starting around the year 900.

Medieval Latin had an enlarged vocabulary, which freely borrowed from other sources. It was heavily influenced by the language of the Vulgate, which contained many peculiarities alien to Classical Latin that resulted from a more or less direct translation from Greek and Hebrew; the peculiarities mirrored the original not only in its vocabulary but also in its grammar and syntax. Greek provided much of the technical vocabulary of Christianity. The various Germanic languages spoken by the Germanic tribes, who invaded southern Europe, were also major sources of new words. Germanic leaders became the rulers of parts of the Roman Empire that they conquered, and words from their languages were freely imported into the vocabulary of law. Other more ordinary words were replaced by coinages from Vulgar Latin or Germanic sources because the classical words had fallen into disuse. 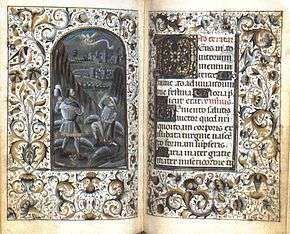 An illuminated manuscript of a Book of Hours contains prayers in medieval Latin.

Latin was also spread to areas such as Ireland and Germany, where Romance languages were not spoken and had never known Roman rule. Works written in the lands, where Latin was a learned language with no relation to the local vernacular, also influenced the vocabulary and syntax of medieval Latin.

Since subjects like science and philosophy, including Argumentation theory and Ethics (pre-law), were communicated in Latin, the Latin vocabulary developed for them is the source of a great many technical words in modern languages. English words like abstract, subject, communicate, matter, probable and their cognates in other European languages generally have the meanings given to them in medieval Latin.[2]

The influence of Vulgar Latin was also apparent in the syntax of some medieval Latin writers, although Classical Latin continued to be held in high esteem and studied as models for literary compositions. The high point of the development of medieval Latin as a literary language came with the Carolingian renaissance, a rebirth of learning kindled under the patronage of Charlemagne, king of the Franks. Alcuin was Charlemagne's Latin secretary and an important writer in his own right; his influence led to a rebirth of Latin literature and learning after the depressed period following the final disintegration of the authority of the Western Roman Empire.

Although it was simultaneously developing into the Romance languages, Latin itself remained very conservative, as it was no longer a native language and there were many ancient and medieval grammar books to give one standard form. On the other hand, strictly speaking there was no single form of "medieval Latin". Every Latin author in the medieval period spoke Latin as a second language, with varying degrees of fluency, and syntax, grammar, and vocabulary were often influenced by an author's native language. This was especially true beginning around the 12th century, after which the language became increasingly adulterated: late medieval Latin documents written by French speakers tend to show similarities to medieval French grammar and vocabulary; those written by Germans tend to show similarities to German, etc. For instance, rather than following the classical Latin practice of generally placing the verb at the end, medieval writers would often follow the conventions of their own native language instead. Whereas Latin had no definite or indefinite articles, medieval writers sometimes used forms of unus as an indefinite article, and forms of ille (reflecting usage in the Romance languages) as a definite article or even quidam (meaning "a certain one/thing" in Classical Latin) as something like an article. Unlike classical Latin, where esse ("to be") was the only auxiliary verb, medieval Latin writers might use habere ("to have") as an auxiliary, similar to constructions in Germanic and Romance languages. The accusative and infinitive construction in classical Latin was often replaced by a subordinate clause introduced by quod or quia. This is almost identical, for example, to the use of que in similar constructions in French.

In every age from the late 8th century onwards, there were learned writers (especially within the Church) who were familiar enough with classical syntax to be aware that these forms and usages were "wrong" and resisted their use. Thus the Latin of a theologian like St Thomas Aquinas or of an erudite clerical historian such as William of Tyre tends to avoid most of the characteristics described above, showing its period in vocabulary and spelling alone; the features listed are much more prominent in the language of lawyers (e.g. the 11th century English Domesday Book), physicians, technical writers and secular chroniclers. However the use of quod to introduce subordinate clauses was especially pervasive and is found at all levels.

Changes in vocabulary, syntax, and grammar

Medieval Latin had ceased to be a living language and was instead a scholarly language of the minority of educated men in medieval Europe used in official documents more than for everyday communication. That resulted in two major features of Medieval Latin compared with Classical Latin. First, many authors attempted to "show off" their knowledge of Classical Latin by using rare or archaic constructions, sometimes anachronistically (haphazardly mixing constructions from Republican and Imperial Latin, which in reality existed centuries apart). Second, many lesser scholars had a limited grasp of "proper" Latin or were increasingly influenced by Vulgar Latin, which was mutating into the Romance languages. 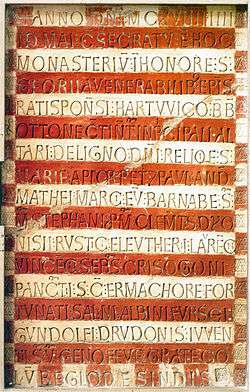 The Prüfening dedicatory inscription of 1119, composed in medieval Latin.

Many striking differences between classical and medieval Latin are found in orthography. Perhaps the most striking difference is that medieval manuscripts used a wide range of abbreviations by means of superscripts, special characters etc.: for instance the letters "n" and "s" were often omitted and replaced by a diacritical mark above the preceding or following letter. Apart from this, some of the most frequently occurring differences are as follows. Clearly many of these would have been influenced by the spelling, and indeed pronunciation, of the vernacular language, and thus varied between different European countries.

These orthographical differences were often due to changes in pronunciation or, as in the previous example, morphology, which authors reflected in their writing. By the 16th century, Erasmus complained that speakers from different countries were unable to understand each other's form of Latin.[3]

The gradual changes in Latin did not escape the notice of contemporaries. Petrarch, writing in the 14th century, complained about this linguistic "decline", which helped fuel his general dissatisfaction with his own era.

The first half of the 5th century saw the literary activities of the great Christian authors Jerome (c. 347–420) and Augustine of Hippo (354–430), whose texts had an enormous influence on theological thought of the Middle Ages, and of the latter's disciple Prosper of Aquitaine (c. 390-455). Of the later 5th century and early 6th century, Sidonius Apollinaris (c. 430 – after 489) and Ennodius (474–521), both from Gaul, are well known for their poems, as is Venantius Fortunatus (c. 530–600). This was also a period of transmission: the Roman patrician Boethius (c. 480–524) translated part of Aristotle's logical corpus, thus preserving it for the Latin West, and wrote the influential literary and philosophical treatise De consolatione Philosophiae; Cassiodorus (c. 485–585) founded an important library at the monastery of Vivarium near Squillace where many texts from Antiquity were to be preserved. Isidore of Seville (c. 560-636) collected all scientific knowledge still available in his time into what might be called the first encyclopedia, the Etymologiae.

Gregory of Tours (c. 538–594) wrote a lengthy history of the Frankish kings. Gregory came from a Gallo-Roman aristocratic family, and his Latin, which shows many aberrations from the classical forms, testifies to the declining significance of classical education in Gaul. At the same time, good knowledge of Latin and even of Greek was being preserved in monastic culture in Ireland and was brought to England and the European mainland by missionaries in the course of the 6th and 7th centuries, such as Columbanus (543–615), who founded the monastery of Bobbio in Northern Italy. Ireland was also the birthplace of a strange poetic style known as Hisperic Latin. Other important Insular authors include the historian Gildas (c. 500–570) and the poet Aldhelm (c. 640–709). Benedict Biscop (c. 628–690) founded the monastery of Wearmouth-Jarrow and furnished it with books which he had taken home from a journey to Rome and which were later used by Bede (c. 672–735) to write his Ecclesiastical History of the English People.

Many medieval Latin works have been published in the series Patrologia Latina, Corpus Scriptorum Ecclesiasticorum Latinorum and Corpus Christianorum.