This article is about the Italian saint. For the film, see Saint Clara (film). For the unincorporated community, see St. Clara, West Virginia.

Saint Clare of Assisi (July 16, 1194 – August 11, 1253, born Chiara Offreduccio and sometimes spelled Clair, Claire, etc.) is an Italian saint and one of the first followers of Saint Francis of Assisi. She founded the Order of Poor Ladies, a monastic religious order for women in the Franciscan tradition, and wrote their Rule of Life,[1] the first set of monastic guidelines known to have been written by a woman. Following her death, the order she founded was renamed in her honor as the Order of Saint Clare, commonly referred to today as the Poor Clares. 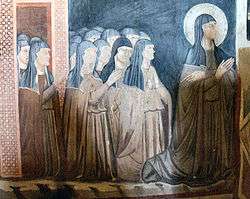 Fresco of Saint Clare and sisters of her order, church of San Damiano, Assisi

St. Clare was born in Assisi, the eldest daughter of Favorino Sciffi, Count of Sasso-Rosso and his wife Ortolana. Traditional accounts says that Clare's father was a wealthy representative of an ancient Roman family, who owned a large palace in Assisi and a castle on the slope of Mount Subasio.[2] Ortolana belonged to the noble family of Fiumi, and was a very devout woman who had undertaken pilgrimages to Rome, Santiago de Compostela and the Holy Land. Later in life, Ortolana entered Clare's monastery, as did Clare's sisters, Beatrix, and Catarina (who took the name Agnes).[3]

As a child, Clare was devoted to prayer. Although there is no mention of this in any historical record, it is assumed that Clare was to be married in line with the family tradition. However, at the age of 18 she heard Francis preach during a Lenten service in the church of San Giorgio at Assisi, and asked him to help her to live after the manner of the Gospel. On the evening of Palm Sunday, March 20, 1212, she left her father's house, and accompanied by her aunt Bianca and another companion, proceeded to the chapel of the Porziuncula to meet Francis. There, her hair was cut, and she exchanged her rich gown for a plain robe and veil.[2] 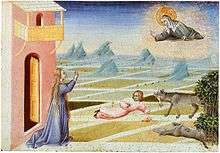 Saint Clare intervenes to save a child from a wolf, in this panel by Giovanni di Paolo, 1455.

Francis placed Clare in the convent of the Benedictine nuns of San Paulo, near Bastia. Her father attempted to force her to return home. She clung to the altar of the church and threw aside her veil to show her cropped hair.[4] She resisted any attempt, professing that she would have no other husband but Jesus Christ.[5] In order to provide the greater solitude Clare desired, a few days later Francis sent her to Sant' Angelo in Panzo, another monastery of the Benedictine nuns on one of the flanks of Subasio. Clare was soon joined by her sister Catarina, who took the name Agnes. They remained with the Benedictines until a small dwelling was built for them next to the church of San Damiano, which Francis had repaired some years earlier.[2]

Other women joined them and they were known as the "Poor Ladies of San Damiano". They lived a simple life of poverty, austerity and seclusion from the world, according to a Rule which Francis gave them as a Second Order (Poor Clares).[4][5]

San Damiano became the center of Clare's new religious order, which was known in her lifetime as the "Order of Poor Ladies of San Damiano". San Damiano was long thought to be the first house of this order, however, recent scholarship strongly suggests that San Damiano actually joined an existing network of women's religious houses organized by Hugolino (who later became Pope Gregory IX). Hugolino wanted San Damiano as part of the order he founded because of the prestige of Clare's monastery.[6] San Damiano emerged as the most important house in the order, and Clare became its undisputed leader. By 1263, just ten years after Clare's death, the order had become known as the Order of Saint Clare.

In 1228, when Gregory IX offered Clare a dispensation from the vow of strict poverty, she replied:[5]

Accordingly, the Pope granted them the Privilegium Pauperitatis — that nobody could oblige them to accept any possession.[5]

Unlike the Franciscan friars, whose members moved around the country to preach, Saint Clare's sisters lived in enclosure, since an itinerant life was hardly conceivable at the time for women. Their life consisted of manual labour[7] and prayer. The nuns went barefoot, slept on the ground, ate no meat and observed almost complete silence.[4]

For a short period, the order was directed by Francis himself.[8] Then in 1216, Clare accepted the role of abbess of San Damiano. As abbess, Clare had more authority to lead the order than when she was the prioress, who had to follow the orders of a priest heading the community.[9] Clare defended her order from the attempts of prelates to impose a rule on them that more closely resembled the Rule of Saint Benedict than Francis' stricter vows. Clare sought to imitate Francis' virtues and way of life so much so that she was sometimes titled alter Franciscus, another Francis.[10] She also played a significant role in encouraging and aiding Francis, whom she saw as a spiritual father figure, and she took care of him during his final illness.

After Francis's death, Clare continued to promote the growth of her order, writing letters to abbesses in other parts of Europe and thwarting every attempt by each successive pope to impose a rule on her order which watered down the radical commitment to corporate poverty she had originally embraced. She did this despite enduring a long period of poor health until her death. Clare's Franciscan theology of joyous poverty in imitation of Christ is evident in the rule she wrote for her community and in her four letters to Agnes of Prague.

In 1224, the army of Frederick II came to plunder Assisi. Clare went out to meet them with the Blessed Sacrament in her hands. Suddenly a mysterious terror seized the enemies, who fled without harming anybody in the city.[5] 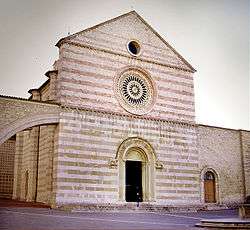 On August 9, 1253, the papal bull Solet annuere of Pope Innocent IV confirmed that Clare's rule would serve as the governing rule for Clare's Order of Poor Ladies. Two days later, on August 11, Clare died at the age of 59. Her remains were interred at the chapel of San Giorgio while a church to hold her remains was being constructed. At her funeral, Pope Innocent IV insisted the friars perform the Office for the Virgin Saints as opposed to the Office for the Dead (Bartoli, 1993). This move by Pope Innocent ensured that the canonization process for Clare would begin shortly after her funeral. Pope Innocent was cautioned by multiple advisors against having the Office for the Virgin Saints performed at Clare's funeral (Bartoli, 1993). The most vocal of these advisors was Cardinal Raynaldus who would later become Pope Alexander IV, who in two years time would canonize Clare (Pattenden, 2008). At Pope Innocent's request the canonization process for Clare began immediately. While the whole process took two years, the examination of Clare's miracles took just six days. On September 26, 1255,[11] Pope Alexander IV canonized Clare as Saint Clare of Assisi. Construction of the Basilica of Saint Clare was completed in 1260, and on October 3 of that year Clare's remains were transferred to the newly completed basilica where they were buried beneath the high altar. In further recognition of the saint, Pope Urban IV officially changed the name of the Order of Poor Ladies to the Order of Saint Clare in 1263.

Some 600 years later in 1872, Saint Clare's relics were transferred to a newly constructed shrine in the crypt of the Basilica of Saint Clare, where her relics can still be venerated today. 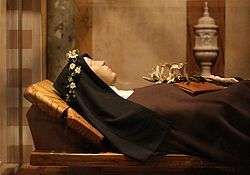 Pope Pius XII designated Clare as the patron saint of television in 1958, on the basis that when she was too ill to attend Mass, she had reportedly been able to see and hear it on the wall of her room.[12]

In art, Clare is often shown carrying a monstrance or pyx, in commemoration of the occasion when she warded away the soldiers of Frederick II at the gates of her convent by displaying the Blessed Sacrament and kneeling in prayer.

Lake Saint Clair and the Saint Clair River in the Great Lakes region of North America were named in 1679 on her feast day, August 11. Mission Santa Clara, founded by Spanish missionaries in northern California in 1777, has given its name to the university, city, county, and valley in which it sits. Southern California's Santa Clara River is hundreds of miles to the south, and gave its name to the nearby city of Santa Clarita. Santa Clara Pueblo, New Mexico celebrates its Santa Clara Feast Day annually on August 12, as the feast was celebrated before the 1969 calendar change. It may be noted that the early California missions were founded by Franciscan Friars, who had a special devotion to Saint Clare.

Clare was canonized two years after her death and her feast day was immediately inserted in the General Roman Calendar for celebration on August 12, the day following her death, as August 11 was already assigned to Saints Tiburtius and Susanna, two 3rd-century Roman martyrs. The celebration was ranked as a Double (as in the Tridentine Calendar) or, in the terminology adopted in 1960, a Third-Class Feast (as in the General Roman Calendar of 1960). The 1969 calendar revision removed the feast of Tiburtius and Susanna from the calendar, finally allowing the memorial of Saint Clare to be celebrated on August 11, the day of her death. Her body is no longer claimed to be incorrupt, and her skeleton is displayed in Assisi.