After World War II, company president Genichi Kawakami repurposed the remains of the company's war-time production machinery and the company's expertise in metallurgical technologies to the manufacture of motorcycles. The YA-1 (AKA Akatombo, the "Red Dragonfly"), of which 125 were built in the first year of production (1954), was named in honour of the founder. It was a 125cc, single cylinder, two-stroke, street bike patterned after the German DKW RT125 (which the British munitions firm, BSA, had also copied in the post-war era and manufactured as the Bantam and Harley-Davidson as the Hummer). In 1955,[5] the success of the YA-1 resulted in the founding of Yamaha Motor Co., Ltd.

In 2002, Yamaha closed down its archery product business that was started in 1959. Six archers in five different Olympic Games won gold medals using their products.[9]

On December 20, 2007, Yamaha made an agreement with the Austrian Bank BAWAG P.S.K. Group BAWAG to purchase all the shares of Bösendorfer,[12] intended to take place in early 2008. Yamaha intends to continue manufacturing at the Bösendorfer facilities in Austria.[13] The acquisition of Bösendorfer was announced after the NAMM Show in Los Angeles, on January 28, 2008. As of February 1, 2008, Bösendorfer Klavierfabrik GmbH operates as a subsidiary of Yamaha Corp.[14]

Yamaha Corporation is also widely known for their music teaching programme that began in the 1950s.

Yamaha electronic have proven to be successful, popular, and respected products. For example, the Yamaha YPG-625 was given the award "Keyboard of the Year" and "Product of the Year" in 2007 from The Music and Sound Retailer magazine.[15] Other noteworthy Yamaha electronics include the SHS-10 Keytar, a consumer-priced keytar which offered MIDI output features normally found on much more expensive keyboards.

Other companies in the Yamaha group include:

Kandō (感動) is a Japanese word used by Yamaha to describe their corporate mission. Kandō in translation describes the sensation of profound excitement and gratification derived from experiencing supreme quality and performance.[16] Some reasonable English synonyms are "emotionally touching" or "emotionally moving".

The Yamaha Music Foundation is an organization established in 1966 by the authority of the Japanese Ministry of Education for the purpose of promoting music education and music popularization. It continued a program of music classes begun by Yamaha Corporation in 1954.[17] 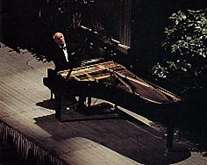 Yamaha expanded into many diverse businesses and product groups. The first venture into each major category is listed below.[18]

Yamaha announced the singing synthesizer Vocaloid for the first time at the German fair Musikmesse on March 5–9, 2003.[19]

Yamaha also began to get involved with the sale and production of Vocaloid applications themselves with Lily being the first; Lily was later sold via Internet Co., Ltd.'s website. Their involvement continued with the VY series, with VY1 being the first, released in deluxe and standard editions on September 1, 2010.[20] The VY series is a series designed to be a high quality product for professional musicians. The series is also designed with the intention to set a new standard for the Vocaloids for having no face, sex or set voice, but are designed to complete any song.[21] VY1 saw a new approach to how the software handled the database of samples and improved the performance of the Vocaloid 2 engine.