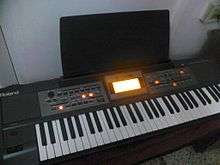 The Roland Corporation (ローランド株式会社, Rōrando Kabushiki Kaisha) is a Japanese manufacturer of electronic musical instruments, electronic equipment and software. It was founded by Ikutaro Kakehashi in Osaka on April 18, 1972, with ¥33 million in capital. In 2005, Roland's headquarters relocated to Hamamatsu in Shizuoka Prefecture. Today it has factories in Italy, Taiwan, Japan, and the USA. As of March 31, 2010, it employed 2,699 employees.[2] It has existed in different forms since 1960, making it relatively old among still-operating manufacturers of musical electronics. Known for hundreds of popular synthesizers, drum machines, and other instruments, Roland has been one of the top names in professional music equipment since the late 1970s.

In 2014, Roland Corporation was subject to a management buyout by Roland's CEO Junichi Miki, supported by Taiyo Pacific Partners.[1]

Origin of the Roland name

Kakehashi founded Ace Electronic Industries in 1960, a manufacturer of numerous combo organs, guitar amplifiers, and effects pedals. He was also contracted by Hammond to produce rhythm machines for the company's line of home organs. In 1973, Kakehashi cut ties with both companies to found Roland.

As with many Japanese start-ups of the period, the name Roland was selected for export purposes as Kakehashi was interested in a name that was easy to pronounce for his worldwide target markets. Rumour has long circulated that he named his company after the French epic poem La Chanson de Roland. In reality, the name Roland was found in a telephone directory. Kakehashi opted for it as he was satisfied with the simple two-syllable word and its soft consonants. The letter "R" was chosen because it was not used by many other music equipment companies, and would therefore stand out in trade show directories and industry listings. Kakehashi did not learn of "The Song Of Roland" until later.[3]

Roland markets products under a number of brand names, each of which are used on products geared toward a different niche.[4]

At one point, Roland acquired the then-defunct Rhodes name, and released a number of digital keyboards bearing the Rhodes brand, but it no longer owns the name. The late Harold Rhodes regained the right to the name in 2000. Rhodes was dissatisfied with Roland's treatment of the marque, and had plans to re-introduce his iconic electric piano, but died before he was able to bring it to market.[6] 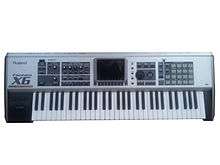 As of May 23, 2015, SubBass Academy of Electronic Music will be hosting the world's first Roland certified Aira Academy.[14] David Barnard, Roland's education consultant said he was delighted to welcome SubBass as the world’s first AIRA Academy and looks forward to developing a range of courses that balance technical knowledge with musical know-how.[15]

On September 9, 2016, Roland celebrated 909 day, in honor of the TR-909 drum machine. During this 24-hour event they debuted new products and held artist performances from different cities around the world.[16][17]