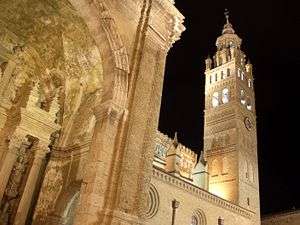 The city of Tarazona is situated on a commanding point, surrounded by a beautiful open plain, through which the river Queiles flows.

The Church of the Magdalene was the ancient cathedral, but the Moors, objecting to its prominent position, compelled them to use a church on the outskirts of the town. In the records left by Miguel this was variously called Santa Maria de la Hidria, de la Vega, or de la Huerta, on account of its position. It was endowed by Teresa Cajal, mother of Pedro de Atarés and wife of García Sánchez, and was begun in 1152. Architecturally it is a combination of Byzantine and Gothic, with a high portico entrance and a high brick-trimmed tower. The centre nave with its pointed arches rises above the side aisles and merges into a spacious transept. In the windows Gothic gives place to Plateresque, but in the side chapels dedicated to St. Lawrence, St. Andrew, the Rosary, St. Peter, the Beheading of St. John the Baptist, the Annunciation, St. Elizabeth of Portugal, the Purification and St. James the Great, Gothic prevails in the reredos and tombs. Bishop Moncada attempted to rebuild the beautiful cloister which had been destroyed in the War of the Two Peters, but as late as 1529 this had not been completed.

Besides the Church of the Magdalene, the Church of St. Michael, with its simple Gothic nave, and that of the Conception nuns, are also notable.

The Church of St. Francis is said to have been founded by Saint Francis of Assisi himself in 1214, and Francisco Jiménez de Cisneros was consecrated archbishop of Toledo in the Chapel of La Piedad in 1495.

The episcopal palace, the ancient Azuda, is built upon a commanding eminence and has a beautiful view. Bishop Pedro Pérez Calvillo purchased this from the Aragonese governor, Jordán Pérez de Urries, in 1386, and entailed it to the bishopric.

The diocesan seminary, dedicated to St. Gaudiosus, was founded in 1593 by Bishop Pedro Cerbuna. It has recently been extensively renovated.

Mention should be made of the monastery of Nuestra Señora de Veruela, a Cistercian abbey founded by Pedro de Atarés, and now a Jesuit novitiate; also of the Church of Borja, ranking as a collegiate church since the time of Pope Nicholas V (1449), favoured and protected by Pope Alexander VI; and of the ancient collegiate church of Calatayud, Santa Maria de Mediavilla, whose priors ranked as mitred deans.

Turiaso was one of the principal towns of the ancient Celtiberian province, and within the confines of the diocese are found many very ancient cities: Bilbilis (Calatayud); Aquae Bilbilitanorum (Alhama); Atacum (Ateca); Augustobriga (Muro); Boverca (Buvierca); Bursao (Borja); Cascantum (Cascante); Gracuris (Corella); Monóbriga (Munébrega); and Vergegium (Verdejo). Pliny the Elder numbers Tarazona among the principal cities of the Celtiberians, and its inhabitants had the privileges of citizenship. Its coat of arms bore the motto "Tubal-Cain built me and Hercules rebuilt me".

Nothing definite is known of the origin of Christianity in Tarazona. Owing to its proximity to Saragossa it is supposed that it was visited at an early date by the disciples of Saint James the Great, but until the 5th century there is no reliable mention of a bishop of Tarazona.

The chronicler Idatius names Leo as bishop in 449; the chronological list of bishops gives St. Prudentius, but the history of this saint is uncertain. The Tarazona Breviary gives 390 as his date, but other sources place him as late as the 9th century. Idatius says that Leo was killed in an uprising led by a certain Basilius where the Bagandae took refuge in the cathedral, and in which a great number were killed.

When the Moors took Tarazona they were able to hold it for a long time on account of its fortified position near the Sierra del Moncayo, between the Douro and the Ebro rivers. The names of its Mozarabic bishops have not come down to us, although it is very probable there were such; on the other hand we know of the Mozarabic saints, St. Attilanus, Bishop of Zamora and St. Iñigo of Calatayud.

The Council of Burgos, which was convened in 1139, and was presided over by the legate Guido, took from the jurisdiction of Tarazona most of the towns of Soria, but bestowed in its place the Archdeaconry of Calatayud.

Miguel Cornel was the real restorer of the see. He governed for thirty-three years (1118-1151), and established the chapters of Tarazona, Calatayud, and Tudela, under the Rule of St. Augustine. In his time also were founded the Monasteries of Fitero and Veruela.

Three bishops of the name of Frontin succeeded him: Juan (1173–94); Garcia, who was present at the battle of Las Navas de Tolosa (1212), and Garcia II, the counsellor of James the Conqueror (el Conquistador). In a species of national council held at Tarazona, the marriage of James to Leonor of Castile was declared null on account of the relationship existing between them. The Franciscans, Mercedarians, Dominicans, and Trinitarians, and the Cistercian and Poor Clare nuns were established in the diocese at this time.

Miguel Jiménez de Urrea, bishop from 1309 to 1316, was protected by king James II of Aragon, and during the time of Pedro Pérez Calvillo the war between Pedro IV the Ceremonious (el Ceremonioso) of Aragon and Pedro the Cruel of Castile took place. Tarazona was laid waste and its cathedral desecrated by the Castilians. The episcopal palace was burned, and la Zuda, sometimes also called Alcázar de Hércules, the palace of the Arab governors, was taken to replace it.