The Roman Catholic Diocese of Bilbao (Latin: Dioecesis Flaviobrigensis) is a diocese located in the city of Bilbao and Province of Biscay in Northern Spain. It is part of the Ecclesiastical province of Burgos.

The Diocese of Bilbao covers all the territory of Biscay, except the exclave of Orduña (between Alava and Burgos), and including the tiny enclave of Valle de Villaverde (Cantabria). The diocese is divided in seven territorial vicarages: 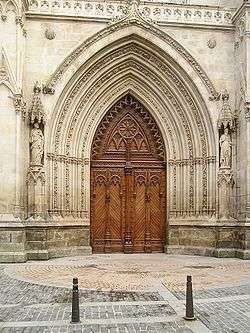 The church was consecrated in Lekeitio in 1287, and was recorded as under construction in 1374. A century later, in 1487, it was all but ready for use. The neo-Gothic retrochoir by architect Casto de Zavala was added between 1881–1884, thanks to benefactor Pascual Abaroa

The church consist of three staggered naves in four sections and a polygonal chevet at the centre, the latter surrounded by a lower retro-choir. On the main wall there is a narrow gallery, in the form of windows with sills decorated with blind tracery. The church has one of the finest triforia in all Basque Gothic Architecture. The archivolted west door is set into a façade blooming with tiny original sculptured decorations. The tower consists of an ancient shaft that rises to roof level and a more modern belfry above.

The church is presided by a superb polychrome wood retable. The retable recounts the life of the Virgin in narrative and symbolic references.