The Diocese of Mondoñedo-Ferrol (also known as "Dioecesis Mindoniensis-Ferrolensis") is one of the five districts in which the Roman Catholic church divides Galicia in North-western Spain.[1][2] The bishop who has two Cathedrals (i.e.: from Latin "cathedra" meaning seat, so two "seats") one in Ferrol and the other in Mondoñedo has jurisdiction over the most northern parishes of Galicia; covering the parishes of the northern part of the Province of A Coruña and the Province of Lugo. The area had previously been home to Britonia, a settlement founded by expatriate Britons in the wake of the Anglo-Saxon invasion of Britain. Britonia was represented by the diocese referred to as Britonensis ecclesia (British church) in sources from the 6th and 7th centuries.

Some authorities have sought to fix the date of the foundation of this diocese (under its primitive name of Britonia) earlier than the second half of the 6th century, but the later date seems the more probable when we consider that, at the Second Council of Braga (572), Mailoc, Bishop of Britonia, was ranked lowest because of the more recent origin of his see. It seems to have been founded by the Suevian king, Theodomir, converted to Catholicism by St Martin of Dumio and to have included in its jurisdiction the Churches of the Britones (a territory coinciding with that of Mondoñedo) and some of those of the Asturias. In the beginning it was a suffragan of Lugo, until the Goths placed Lugo under the jurisdiction of Braga. After Mailoc no mention is found of the bishops of Britonia for a long time, doubtless because the great distance from Toledo made it impossible for them to assist at the councils. In 633 Metopius, Bishop of Britonia, assisted at the Fourth Council of Toledo, presided over by St Isidore of Seville. Sonna, his successor, was one of the bishops who signed at the Seventh Council of Toledo (646) and sent a representative to the Eighth Council of Toledo (16 December 653). When Britonia was invaded and destroyed by the Saracens, the bishop and priests took refuge in Asturias. In 899, during the reign of Alfonso III of Asturias, Theodesimus, Bishop of Britonia assisted with other prelates at the consecration of the church of Santiago de Compostela. It may also be noted that, in the repartition of the parishes, the church of San Pedro de Nova was assigned as the residence of the bishops of Britonia and Orense, when they should come to assist at the councils of Oviedo. By that time, however, the See of Britonia had been translated to the town of Mondumetum and the church of St. Martin of Dumio, or Mondoñedo. The diocese has since been most generally known by this name, although the episcopal residence has again changed. After the time of St. Martin it was transferred to Villamayor de Brea, from which it derived the name of Villabriensis, and afterwards to Ribadeo, but it was nevertheless known as Mindoniense, as a document of the year 1199 bears witness. At first, its patron was St. Martin of Tours, but St. Martin of Dumio was afterwards chosen patron.[3]

The diocese of Valabria, corresponding to the diocese that had its seat at Villamayor de Brea, is included in the Catholic Church's list of titular sees.[4] 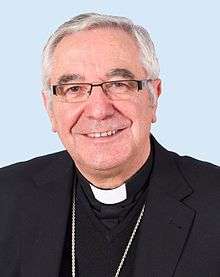 Coordinates for both cathedrals: