In 1912 the diocese of Teruel comprised the civil province of the same name, excepting the town of Bechi (Castellón).

All the churches of Teruel are contemporary with its foundation (1176), as the founders built nine churches, one, Santa Maria de Mediavilla, in the centre, and the remaining eight in a circle following the circuit of the walls. The central church was made a collegiate church in 1423 and named the cathedral in 1577. It was originally built of brick and rubblework, but since the restoration in the seventeenth century it has lost its primitive character. The Doric choir stalls were the gift of Martín Terrer de Valenzuela, Bishop of Teruel, and later of Tarazona.

It is believed by some that Teruel and the ancient Turba are the same. Turba was the city whose disputes with the Saguntines gave Hannibal an excuse for attacking Saguntum and beginning the Second Punic War. According to the annals of Teruel it appears that Turba was not situated on the site of the present city of Teruel, but at its boundary line.

Teruel was founded in 1176 by Sancho Sánchez Muñoz and Blasco Garcés Marcilla. It formed a separate community and was governed by the Fuero de Sepúlveda.

King Jaime I received its support in the conquest of Valencia (1238), and the standards of Teruel were the first to wave in the gateway of Serranos. In 1271 it joined in the war against Castile, invaded Huete and Cuenca.

Teruel sided with king Pedro IV in his war against the "Union". In recognition of this the king visited the city in 1348 and conferred upon it the title of exenta (exempt).

Ferdinand and Isabella visited Teruel in 1482, took the oath in the cathedral, and received the freedom of the city. The founding of the Inquisition in 1484 produced serious changes because the converts were numerous and powerful. The inquisitor, Juan de Solivellia, was forced to leave. Property to the amount of 133,000 sueldos was confiscated and turned over to the city.

Pope Gregory XIII at the earnest solicitations of king Philip II created the diocese in 1577. The first bishop, Juan Pérez de Artieda, was elected but not consecrated; the first bishop installed was Andrés Santos de Sampedro, who was transferred to Saragossa in 1579.

In 1598 the inhabitants of Teruel abjured the Fuero de Sepúlveda before the courts of Aragon, in order to come under the Government of Aragon.

The seminary, dedicated to St. Toribio de Mogrovejo, was founded by the bishop Francisco José Rodríguez Chico, who after the expulsion of the Jesuits in 1769 was granted the use of their magnificent college by king Charles III. During the wars of independence and the civil wars that followed, the building was taken over for military quarters and shortly afterwards the seminary was suppressed. It was re-established in 1849 by Don Antonio Lao y Cuevas, who gave his own palace for the purpose. The Jesuit college has since been restored to the order. 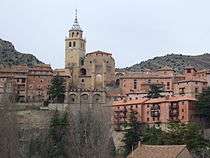 Among the distinguished citizens of Teruel must be mentioned:

In 1851 or 1852 the see became Diocese of Teruel-Albarracín (probably as a consequence of the Concordat of 1851 suppressing the Diocese of Albarracín).

Diocese of Teruel and Albarracín (since 1985)

In 1985 the see became Diocese of Teruel and Albarracín.

Bishops of Teruel and Albarracín (since 1985)