The archdiocese, created in Roman times, was reestablished in 1118.

Roman period (until the 5th century)

Tarragona is one of the most ancient cities of Spain, probably of Iberian origin, as its coins and Cyclopean walls indicate.

The Romans selected Tarragona as the centre of their government in Spain. In the division of the peninsula it was the capital first of Hispania Citerior (Hither Spain) and then of the Province of Hispania Tarraconensis.

The Church of Tarragona is undoubtedly one of the most ancient in Spain, holding as it does the tradition of the coming of St. James and St. Paul. The visit of St. Paul to Tarragona is not altogether beyond the range of possibilities, supposing that he came from Rome to Spain, as he promised to do, in the Epistle to the Romans (Romans 15:24), and as St. Jerome affirms that he did.

The see of Tarragona, which was vacant at that time, was represented at the Council of Arles (314) by two procurators, the priest Probatius and the deacon Castorius. Himerius, who sent the priest Basianus to Pope St. Damasus, and who obtained a letter from Pope St. Siricius, was Archbishop of Tarragona in 384.

It is also conjectured that the Hilarius who was the subject of the Decretal issued by Pope Innocent I was also a Bishop of Tarragona. Ascanio was bishop in 465.

In the fifth century Tarragona was overrun by the Vandals, Suevi, and Alani.

The Visigothic king, Euric, took possession of Tarragona in 475 and totally demolished it. During the occupation of the Visigoths it flourished once more.

Sergius, who was bishop from 535 to 546, held councils in Barcelona and Lleida (546). St. Justus, Bishop of Urgel, dedicated to him his commentary on the Song of Solomon. Tranquillinus was bishop for many years previous to 560. He had been a monk in the Monastery of Asana, under the direction of St. Victornus.

Artemius, bishop prior to 589, was not able to attend the Third Council of Toledo (589), but sent a substitute, Stephen. He called provincial councils at Zaragoza (599) and Barcelona.

In time of Vera or in that of his successor, George, the Muslim invasion took place. The Arabs destroyed Tarragona in 719.

Louis the Pious appears to have temporarily taken possession of the city. A portion of its territory was bestowed on the Bishop of Barcelona, and the metropolitan rank was given to the Bishop of Narbonne, but was recovered in 759.

Berengarius of Rosanes, Bishop of Vich in ca. 1078-ca. 1099, petitioned Pope Urban II for permission to promote a crusade for the reconquest of Tarragona. Count Berenguer Ramón II the Fratricide succeeded in taking the city and made it a fief of the Holy See. The pope, in recognition of the efforts of the Bishop of Vich, conferred on him the pallium as Archbishop of Tarragona, transferring to him all rights to the city and its churches which had previously belonged to the Holy See. The new bishop, however, was to remain in possession of the Church of Vich.

A similar concession was granted to St. Olegarius, Bishop of Barcelona in 1116-1137, who was permitted to retain possession of his former Church until he had obtained complete and peaceful possession of that of Tarragona, of which he had been named Archbishop.

Archdiocese of Tarragona (since 1116)

It was not until 1116 that Tarragona was definitively reconquered by Ramón Berenguer III the Great. Bishop Berenguer had died in 1110, after having assisted, in 1096, at the Council of Nîmes convoked by Pope Urban II.

His successor in the See of Tarragona, St. Olegarius, had been a canon regular at St. Rufus in Provence, later an abbot, and then Bishop of Barcelona in 1116-1137. To him is due the restoration of the metropolitan authority of Tarragona. In 1117 Count Ramón Berenguer III conferred on him the government of the city that he might endeavour to recolonize it, which work he carried on with great zeal.

He assisted at the councils of Toulouse and Reims (1109), of the Lateran (1123), and of Clermont (1130), and accompanied the Count of Barcelona as pontifical legate in the war which terminated in the imposition of a tribute upon Tortosa and Lleida. The Norman Robert Burdet also joined the forces of the Count of Barcelona, established himself in Tarragona and obtained dominion over a great part of the city.

On the death of St. Olegarius (6 March 1137), Gregory, Abbot of Cuxana, succeeded him in the vacant See of Tarragona, and was the first incumbent of that see to receive the title of archbishop.

The dissensions among the sons of Robert Burdet led to the murder by them of Archbishop Hugo de Cervellón 22 April 1171.

By special privilege of the pope, all the kings of Aragon were crowned at Zaragoza by the archbishop of Tarragona, until the metropolitan See of Zaragoza was re-established in 1318.

The dissensions between the archbishops and the kings, on account of the jurisdiction over Tarragona granted to the bishops who had begun its resettlement, continued during the time of king Alfonso II of Aragon, who bestowed the city as a dowry on his wife, Doña Sancha.

When king Jaime I, a child of six years, took the oath, the Archbishop of Tarragona, Don Aspargo Barca (1215–1233), carried him in his arms. Although he was far advanced in his years, he wished to accompany the king in his expedition to conquer Majorca, and when Don Jaime refused his consent, he contributed a thousand marks in gold and twelve hundred armed men.

King Pedro IV the Ceremonious, who, after forcibly seizing the dominions of the archbishop, repented in his last illness and restored to St.Tecla, patroness of the city, all that he had unjustly acquired.

Don Pedro Zagarriga, Archbishop of Tarragona in 1407-1418, was one of the arbitrators at the Compromise of Caspe (1412).

One of the most celebrated prelates of Tarragona, Antonio Agustín y Albanell (d. 1586), a native of Zaragoza, was an eminent jurisconsult and numismatist. He put an end to the struggles referred to in Don Quixote, between the Narros and Cadells factions, which had disturbed the peace of Catalonia. 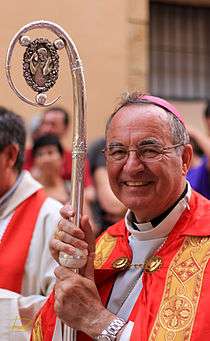 All the names in italics are given in Spanish:

In 711 the Muslim invasion took place, and the Arabs destroyed Tarragona in 719.

Archbishops of Tarragona (since 1118)