The Roman Catholic Diocese of San Cristóbal de La Laguna (Latin: Sancti Christophori de Laguna), also called Diocese of Tenerife or Diocese Nivariense, is a diocese located in the city of San Cristóbal de La Laguna in the Canary Islands in the Ecclesiastical province of Sevilla in Spain. The diocese includes the islands of Tenerife, La Palma, La Gomera and El Hierro, in the province of Santa Cruz de Tenerife.

The arrival of Christianity to the western islands of the Canaries took place (as in the eastern islands) before the complete conquest of the archipelago and its incorporation into the Crown of Castile held in 1496 with the conquest of the island of Tenerife. Christianization was motivated basically as preparation for the subsequent conquest.[3]

In this work the Normans missionary friars and then Catalan and Majorcan (especially Franciscans and Dominicans) who settled first in the eastern islands where even founded bishoprics and from where they began to evangelize the Westerners occupied.[3] These, (as will happen later in America) accompanied the conquistadores in their mission to convert and catechize the aboriginals guanches, which like other ancient peoples had their own religion.

After the conquest these cults or syncretic be eradicated and replaced by the Catholic religion. The presence of Christian elements in the western islands of the Canaries in the period before the conquest is a palpable fact, example of this is the presence in two of these islands marianas images that reach great notoriety throughout the entire archipelago: The Virgin of Candelaria in Tenerife (Patron Saint of the Canary Islands) and the Virgen de las Nieves (Patron Saint of La Palma).[3] It is believed that these images have been brought to these islands by missionaries Catalan or Majorcan a century before being revered by Aborigines since. 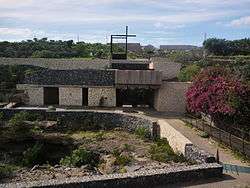 The cave of Chinguaro in Tenerife was the first place where aboriginal Guanches worshiped the Virgin of Candelaria and the first Aboriginal shrine that contained a Christian image in the Canary Islands.

The origins of creating a diocese based in Tenerife has its home since shortly after the conquest of the Canaries, it was the same Alonso Fernández de Lugo (conqueror of Tenerife) who in 1513 asked the Court to the island of Tenerife had an Episcopal see, calling for it to move the diocesan headquarters Canary Islands of Las Palmas de Gran Canaria to San Cristóbal de La Laguna.[4]

A short time later after the conquest of the Canary Islands, Tenerife quickly became the most populated island of the archipelago and San Cristóbal de La Laguna in the most important town in the Canary Islands.[4] Fernández de Lugo, who had received the title of «Primer Adelantado de las Islas Canarias» by the Kings of Spain wished therefore raise the ecclesiastical rank of San Cristóbal de La Laguna, a city he founded and where his residence was located.[5]

At that time, was still fresh the transfer of the Episcopal see of the Canary Islands to the city of Las Palmas on the island of Gran Canaria, home initially was in San Marcial del Rubicón in the south of the island of Lanzarote (by being this first conquered the island). However the idea of moving the bishopric to the city of La Laguna was not prospered.[6] The reasons for the refusal were based primarily on the fact that it had already begun to build and expand the new Cathedral of Santa Ana in Las Palmas, the oligarchy of Gran Canaria wanted to have some stability and independence of the governing authorities of the Canary Islands that were based in the La Laguna.[5]

Soon after, he attempted to share the diocesan headquarters between Las Palmas and La Laguna but that idea did not prosper. In 1515 the then only municipality of Tenerife (with Fernández de Lugo in the lead) took the founding act of the Church of Our Lady of Remedies (now La Laguna Cathedral) to convey to the court the need for residence in Tenerife from members of the Cathedral chapter of Canaries, which had it based in Las Palmas de Gran Canaria.[6] On 19 November 1517 the council again sent to the Court a letter in similar terms which were ratified in the earlier decision, which did not reach any positive response.[6] Subsequently, requests for creation of a diocese stated that its jurisdiction should cover the western islands of the Canaries.

In the 16th, 17th and 18th centuries there will be a boom of contemplative and religious life. At this time born in Tenerife: Peter of Saint Joseph Betancur and José de Anchieta, the two native saints of the Canary Islands. Both were two of the greatest missionaries in Latin America. Another important religious figure born at the time was the Servant of God Mary of Jesus de León y Delgado, whose body remains uncorrupted.

In 1783 he again requested the erection of a diocese in San Cristóbal de La Laguna (so that it encompasses the western islands of the Canary Islands), which was taken with great suspicion by members of the Cathedral Chapter and Bishop, preventing him ecclesiastical institutions based in Gran Canaria.[6]

Creation of the diocese 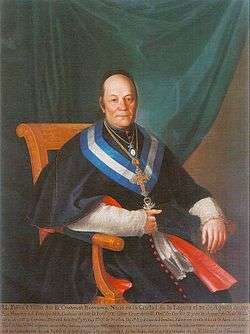 Cristóbal Bencomo y Rodríguez. Confessor of King Ferdinand VII of Spain and Titular Archbishop of Heraclea. It was the great promoter of the creation of the Diocese of San Cristobal de La Laguna.

In 1818, the clergy and the authorities of Tenerife requested again the creation of the Diocese to the Holy See (this time with the support of King Ferdinand VII of Spain) in a document called Instruction of the Chamber of Castile, having a favorable response of Pope.[7] In this role it played an important role the priest Cristóbal Bencomo y Rodríguez, confessor of King Ferdinand VII and Titular Archbishop of Heraclea.[8]

On February 1, 1819 a papal bull of Pope Pius VII approved the division of the bishopric of the Canary Islands in two dioceses. Finally, between February and December 1819 this diocese is created, since previously the Roman Catholic Diocese of Canarias was administering the entire archipelago.[6]

The Pope Pius VII in establishing the diocese determines that Bula fundamental aspects of the organization of the same;[1] the cathedral headquarters is the Parish of Our Lady of Remedies of San Cristóbal de La Laguna,[1] that the diocese is formed by the four western islands of the Canary Islands (El Hierro, La Palma, La Gomera and Tenerife),[1] the official name the diocese is the same as the city where it is based,[1] that the documents concerning the diocese of San Cristóbal de La Laguna deposited with the secretary of the curia of Las Palmas should be transferred to the new diocese,[1] the diocese and its cathedral are suffragan of the Archdiocese of Seville,[1] and the patronage of the new diocese is established as follows: The Our Lady of Remedies main patron of the cathedral and the diocese, and St. Ferdinand III of Castile and St. Elizabeth of Aragon like the saints small employers the same.[1]

As a result of the Concordat of 1851, the suppression of several Spanish dioceses that had been recently created, including the Diocese of San Cristóbal de La Laguna which should be annexed to the Roman Catholic Diocese of Canarias is established. The Cathedral Chapter of Canaries yet positioned against such a measure defending the independence of the Diocese of Tenerife. Subsequently, the Vatican requires that one of the diocese remains condemned to disappear.[4]

The current bishop, 12th of the Diocese of San Cristóbal de La Laguna is Monsignor Bernardo Álvarez Afonso. The diocese has about 892,000 baptized in 2014. It is also the Canarian diocese has both more priests (255), as permanent deacons (6) and parishes (312).[9]

Chronology since the creation of the Diocese until today:

Iglesia Nivariense (Church Nivariense) is a religious magazine published by the Diocese of Tenerife. The publication deals with the religious celebrations of the diocese and related religious topics.

Also it publishes for other islands that shape the diocese: La Palma, La Gomera and El Hierro. In the magazine there do not appear sections of politics, economy or sports. It is published especially to distribute it in the parishes and churches of the Diocese of Tenerife.

The slogan of this magazine is a "Publication of the Diocese of Tenerife". 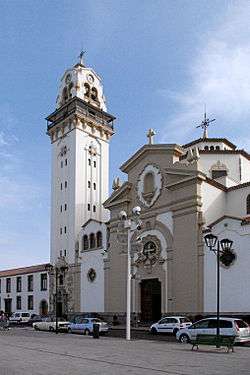 The Diocese of Tenerife has saints, blessed and venerables of popular devotion, among them: