Not to be confused with Longest element of a Coxeter group.

In mathematics, the Coxeter number h is the order of a Coxeter element of an irreducible Coxeter group. It is named after H.S.M. Coxeter.[1]

There are many different ways to define the Coxeter number h of an irreducible root system.

A Coxeter element is a product of all simple reflections. The product depends on the order in which they are taken, but different orderings produce conjugate elements, which have the same order.

The eigenvalues of a Coxeter element are the numbers e2πi(m − 1)/h as m runs through the degrees of the fundamental invariants. Since this starts with m = 2, these include the primitive hth root of unity, ζh = e2πi/h, which is important in the Coxeter plane, below.

There are relations between group order, g, and the Coxeter number, h:[2]

, considered as the symmetric group on n elements, are n-cycles: for simple reflections the adjacent transpositions

, a Coxeter element is the n-cycle

, and thus their product is a rotation by 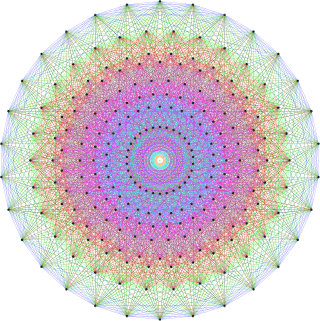 For a given Coxeter element w, there is a unique plane P on which w acts by rotation by 2π/h. This is called the Coxeter plane and is the plane on which P has eigenvalues e2πi/h and e−2πi/h = e2πi(h−1)/h.[4] This plane was first systematically studied in (Coxeter 1948),[5] and subsequently used in (Steinberg 1959) to provide uniform proofs about properties of Coxeter elements.[5]

The Coxeter plane is often used to draw diagrams of higher-dimensional polytopes and root systems – the vertices and edges of the polytope, or roots (and some edges connecting these) are orthogonally projected onto the Coxeter plane, yielding a Petrie polygon with h-fold rotational symmetry.[6] For root systems, no root maps to zero, corresponding to the Coxeter element not fixing any root or rather axis (not having eigenvalue 1 or −1), so the projections of orbits under w form h-fold circular arrangements[6] and there is an empty center, as in the E8 diagram at above right. For polytopes, a vertex may map to zero, as depicted below. Projections onto the Coxeter plane are depicted below for the Platonic solids.

In three dimensions, the symmetry of a regular polyhedron, {p,q}, with one directed petrie polygon marked, defined as a composite of 3 reflections, has rotoinversion symmetry Sh, [2+,h+], order h. Adding a mirror, the symmetry can be doubled to antiprismatic symmetry, Dhd, [2+,h], order 2h. In orthogonal 2D projection, this becomes dihedral symmetry, Dihh, [h], order 2h.

In five dimension, the symmetry of a regular polyteron, {p,q,r,s}, with one directed petrie polygon marked, is represented by the composite of 5 reflections.

In dimensions 6 to 8 there are 3 exceptional Coxeter groups, one uniform polytope from each dimension represents the roots of the En Exceptional lie groups. The Coxeter elements are 12, 18 and 30 respectively.