East Lake Golf Club is a private golf club located approximately 5 miles east of downtown Atlanta, Georgia. Established in 1904, East Lake is the oldest golf course in the city of Atlanta.[3] East Lake was the home course of golfer Bobby Jones and much of its clubhouse serves as a tribute to his accomplishments.

All proceeds from operations at East Lake Golf Club – more than $20 million to date[3] – go to support the East Lake Foundation, which has helped transform one of the nation's worst public housing projects into a thriving community.[6] 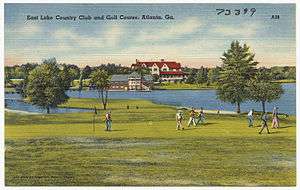 Old postcard of the course at East Lake.

The Atlanta Athletic Club (AAC) was formed in 1898 and due to its popularity it gained 700 members in only four years. The director of the club's athletic program was John Heisman, the famous football coach for whom the Heisman Trophy is named. In 1904 the AAC bought property at East Lake to build a country club which included a golf course. Course architect Tom Bendelow was asked to lay out the course. 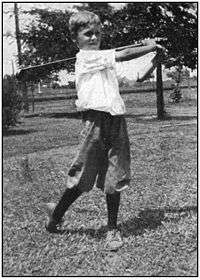 The course's first holes were built in 1906 and were initially only seven holes, then nine. In the summer of 1907, the course was expanded to 17 holes, and later that year the 18th hole was built to complete it. Also in 1907, the first significant tournament was hosted at East Lake, the Southern Amateur, won by Nelson Whitney. In 1908, Tom Bendelow opened his "No. 2" course at East Lake.

In 1913, famed golf course architect Donald Ross redesigned the course at East Lake. The new plan provided for each of the nine holes to conclude at the clubhouse. Ross also redesigned the No. 2 course in 1928.

A tragic fire destroyed the original clubhouse at Eastlake in 1925. Following the fire, famed architect Philip Shutze, who is known for constructing the famous Swan House in Buckhead, was hired by the club to build East Lake's present day two-story Tudor style clubhouse. 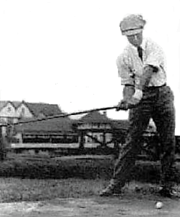 Golfer Bobby Jones is said to have played his first and last games of golf at East Lake.[7] Jones won golf's Grand Slam in 1930, claiming the U.S. Amateur, U.S. Open, British Amateur and British Open titles in the same year. Jones's father, "Colonel" Robert P. Jones, served as the president of East Lake from 1937–42 and as a director for 38 years. Bobby Jones himself also served as president of East Lake on 1946–47.

Other notable East Lake players around the same time were amateurs Watts Gunn, Perry Adair, Charlie Yates and Alexa Stirling Fraser many of whom were assisted by East Lake's golf professional Stewart Maiden.

In 1963, East Lake hosted the 15th biennial Ryder Cup where Arnold Palmer served as the playing captain of the winning US Team.

East Lake began a downward slope when the surrounding neighborhood deteriorated in the 1960s and became victim to suburban flight. The Atlanta Athletic Club became a part of this when it sold the No. 2 course to developers and moved to its current home in Johns Creek. The original course and clubhouse were saved by a group of 25 members who purchased them and created East Lake Country Club in 1968.

In 1970, the East Lake Meadows public housing project was built on the site of the No. 2 golf course and became a center for poverty, drugs and violence. Middle-income homeowners fled the surrounding neighborhood, replaced by low-income renters. By the 1980s, East Lake became a mostly forgotten golf course in a seemingly hopeless neighborhood.

This all changed in 1993 when a local charitable foundation headed by Tom Cousins purchased East Lake with the intent to restore it as a tribute to Bobby Jones and the club's other great amateur golfers. The East Lake Foundation was also created and has used the renovation as a catalyst for revitalizing the surrounding community.

Golf with a Purpose

In 1998 East Lake's No. 2 golf course was transformed into the Charlie Yates Golf Course, a 9-hole "executive" public course that provides golf education to children living in the city of Atlanta.[11] The course was rated one of the top 10 short range courses in America by Golf Range Magazine and all profits from the course go to benefit the East Lake Foundation.[12]

Charlie Yates was an East Lake golfer who won the British Amateur at Royal Troon Golf Club in 1938. Charlie grew up on Second Avenue, the street which separated East Lake's main course from its No. 2 course. His boyhood hero was Bobby Jones, whom he knew and played with on the course at East Lake.

East Lake Golf Club is home to the Tour Championship

Hole 18 is a par 3, which has been criticized as lacking drama for fans. The PGA Tour announced in February 2016 that it would be reversing the nines at East Lake for the Tour Championship in the coming year so that play will finish on a more exciting par-5 hole.[13]

In May 2015 it was announced that East Lake would be the site of a new collegiate golf tournament, the East Lake Cup. In partnership with the Golf Channel the East Lake Cup invites the top men's and women's teams from the previous season to compete in a match play championship each November. The tournament is broadcast on the Golf Channel. The inaugural East Lake Cup was played November 2 and 3, 2015. The champions of the first year's tournament were University of Illinois men's golf team and the University of Southern California women's golf team.[14]

East Lake has hosted many prestigious tournaments including: