Dublin is a city in Franklin, Delaware, and Union counties in the U.S. state of Ohio. The population was 41,751 at the 2010 census. Dublin is a suburb of Columbus, Ohio.

Each year in late May or early June, the city hosts the Memorial Tournament, a stop on golf's PGA Tour. Consequently, numerous golf aficionados choose to make Dublin their home. There are also several other golf courses in Dublin. The Riviera Golf Club (closed in 2014) was home to the American-Italian Golf Association. Tartan Fields Golf Club hosted the LPGA's Wendy's Championship for Children from 2002 through 2006. Dublin also has a public golf course financed by the Muirfield association, as well as the Jack Nicklaus-designed The Country Club of Muirfield Village.

Other annual events include the July 4 music event, a St. Patrick's Day parade, and the Dublin Irish Festival, which is one of the largest Irish-American festivals.

Although its earliest settlements date back to 1802, the village that became Dublin did not begin to take shape until the arrival of the Sells family from Huntingdon, Pennsylvania. Brothers Peter and Benjamin Sells purchased 400 acres (1.6 km²) of land on the west bank of the Scioto River as a gift for their brother John. In 1808, John Sells brought his family to the region, and by 1810 he had begun to survey lots for the new village with his partner, an Irish gentleman named John Shields. According to historians, Shields is responsible for naming the town after his birthplace:

"If I have the honor conferred upon me to name your village, with the brightness of the morn, and the beaming of the sun on the hills and dales surrounding this beautiful valley, it would give me great pleasure to name your new town after my birthplace, Dublin, Ireland."[6]

By 1833, Dublin contained several mills and only one store.[7] In 1970, Dublin was still a small town with only 681 residents. However, the construction of Interstate 270 facilitated a population boom, spearheaded by the acquisition of major corporate headquarters such as Ashland Inc and Wendy's International. In addition, the growth of the Muirfield Village Golf Club and its residential subdivision attracted numerous affluent citizens to the rapidly growing suburb. Dublin was officially declared a city in 1987, after reaching a population of 5,000 residents.

As part of this boom Dublin significantly expanded its area, annexing parts of Washington, Perry, Concord, and Jerome townships.

The Scioto River passes through Dublin. In this area the river and its tributaries cut deep gorges through the limestone bedrock, and the riverbed is stony. Some of these tributaries feature waterfalls.

Located on the Glaciated Allegheny Plateau, Dublin has relatively flat topography. Nevertheless, there are numerous ravines surrounding the tributaries of the Scioto River, which make for steep cliffs in some areas. Elevations range from 780 feet (238 m) above sea level where the Scioto River leaves the city at Hayden Run Road, while the high point is 1000 feet (305 m) at Glacier Ridge Metro Park.[9][10] 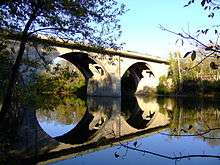 Being a modern American suburb, the city is primarily accessed by car. In addition to Interstate 270, U.S. Highway 33, State Route 161, and State Route 745 pass through the city. There is a 77-mile (124-km) network of bike trails that run throughout the city. Long term plans include expanding the trails further, as well as connecting them to the regional trail system to facilitate travel to downtown Columbus. COTA provides limited service in the southeast part of the city. Routes 56 and 58 provide express service from the commercial areas around Frantz and Rings Roads to Downtown Columbus during rush hour periods. 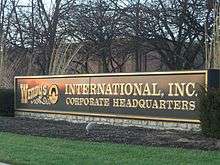 Dublin is home to the headquarters of a number of companies, including Cardinal Health, IGS Energy, Stanley Steemer, Wendy's, OCLC, Pacer International and MindLeaders. Other organizations with significant operations include Ashland Inc., Nationwide Insurance and Verizon Wireless (moving to Hilliard, Ohio in Q1 2014. The city is attempting to attract new technology oriented businesses as well. Dublin Methodist Hospital, part of the OhioHealth system, opened in January 2008. The city is in the process of creating a city wide internet (mesh wifi) hotspot; being developed by DHB Networks.

According to the City's 2010 Comprehensive Annual Financial Report, [11] the top employers in the city are:

There were 14,984 households of which 45.1% had children under the age of 18 living with them, 69.5% were married couples living together, 5.9% had a female householder with no husband present, 2.4% had a male householder with no wife present, and 22.2% were non-families. 18.4% of all households were made up of individuals and 5.4% had someone living alone who was 65 years of age or older. The average household size was 2.78 and the average family size was 3.21.

There were 11,209 households out of which 46.6% had children under the age of 18 living with them, 70.7% were married couples living together, 5.0% had a female householder with no husband present, and 22.6% were non-families. 18.5% of all households were made up of individuals and 3.8% had someone living alone who was 65 years of age or older. The average household size was 2.80 and the average family size was 3.24.

As of 2011 Columbus has the highest concentration of Asians of any Ohio city.[15] As of 2013 many Japanese expatriates working at Honda offices in the area live in Dublin. As of that year, in some subdivisions in Dublin, Japanese make up 20–30% of the residents. The community includes Japanese restaurants. A Coldwell Banker real estate agent named Akiko Miyamoto stated in Car Talk that the services provided for Japanese speakers by the Dublin City School District attract Japanese expatriates to Dublin.[16]

Honda first established operations in Marysville in 1979. Japanese people began living in Dublin and other suburbs instead of Marysville because Dublin established a support system for Japanese residents and the suburbs offered Saturday schools for Japanese residents. As of the 2010 U.S. Census, 1,071 Japanese people live in Dublin, making up 2.6% of the city's population. And also as of 2010, 122 Japanese live in Union County, making up 0.2% of the county's population; Marysville is in this county. Holly Zachariah of the The Columbus Dispatch stated that "It has been that way historically."[17] According to the "2013 Japanese Direct Investment Survey" by the Consulate-General of Japan in Detroit, Dublin had 2,002 Japanese nationals,[18] giving it the highest such population in the state.[19]

The Dublin City School District has three high schools (Coffman, Scioto, and Jerome), four middle schools (Sells, Davis, Grizzell, and Karrer) and thirteen elementary schools. As of autumn 2006, the approximate student enrollment was 13,200. In 1996, the documentary Children in America's Schools with Bill Moyers based on the book stated Dublin as the best school district in the country.

The Hilliard City School District also serves a portion of the community.[20] The Hilliard district operates one school, Washington Elementary School, in the city limits.[21]

The Dublin Library of the Columbus Metropolitan Library is located in the city.[23] Nearby libraries include the Northwest Library and the Hilliard Branch.[22] 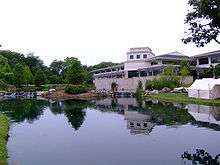 Dublin features 1,000 acres (4.0 km2) of parks, including 77 miles (124 km) of scenic bike trails and 39 developed parks with wooded natural areas and river frontage. Several Dublin parks are located along the Scioto River, including the two Dublin Kiwanis Riverway parks. The river is accessible at several points for small watercraft, and the nearby Griggs and O'Shaughnessy reservoirs allow motorboating and sailing.

Several of Dublin's parks are home to a unique assortment of outdoor sculptures—part of the Art in Public Places collection, established by the Dublin Arts Council. In 1988, the council developed the program to enhance the quality of life for residents, and to establish a public art tour throughout the city to attract visitors. It has since become a nationally recognized program. The series includes a 12 ft (3.7 m) tall stone portrait of local legend, "Leatherlips" (the Wyandot Native American Chief known for the strength of his word); Field of Corn—featuring 109 human-sized cement ears of corn that seem to sprout from one Dublin field; and a copper house that honors the region's Native American culture.

The Rec Center is home to the Dublin Sea Dragons, a year round competitive swim team.

Ballantrae Park is located at the entrance of its namesake subdivision. Sitting upon a 20-foot-tall hillock, there is a 15-foot (4.6 m) bronze sculpture called "Dancing Hares".[24] An interactive play fountain is found at the base of the hill. 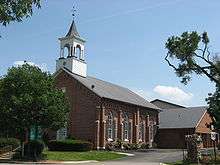 Dublin Community Church is listed on the NRHP.

Saint John Lutheran Church is listed on the NRHP. 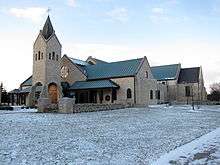 Approximately 35% of Dublin residents affiliate with some religious organization.[25] As such, Dublin is home to many religious organizations, two of which own buildings listed on the National Register of Historic Places (Dublin Community Church and Saint John Lutheran Church).[26] Diocesan Publications, a secular company that specializes in producing Catholic parish bulletins among other products, has an office in Dublin.[27] 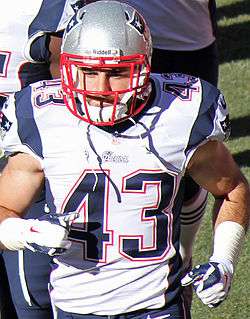