Wentworth Club is a privately owned golf club and health resort in Virginia Water, Surrey, on the south western fringes of London, not far from Windsor Castle. The club was founded in 1926. Beijing-based Reignwood Group bought the club in September 2014 and implemented a new debenture membership structure.

The 19th century house the "Wentworths" (now the club house for the club) was the home for the brother-in-law of the Duke of Wellington. It was purchased in 1850 by exiled Spanish marquis and count Ramon Cabrera and his heiress wife. After his death, his wife, née Catherine Anne Vaughn-Richards, bought up the surrounding lands under The Cabrera Trust to safeguard the meadows, brooks and the trees planted from her travels on the continent with her gentrified husband to form what has become the heart of the Wentworth Estate.[1]

In 1912, builder W.G. Tarrant had started developing St George's Hill, Weybridge - a development of houses based on minimum 1-acre (4,000 m2) plots based around a golf course. In 1922 Tarrant acquired the development rights for the Wentworth Estate, getting Harry Colt to develop a golf course around "Wentworth" house. Tarrant developed the large houses on the estate to a similar Surrey formula used at St George's Hill. Development of Wentworth Estate ground to a halt due to the Great Depression in the late 1920s. In 1931 when the banks asked for repayment of a large debenture, Tarrant was forced to declare bankruptcy. The ownership of the land passed to Wentworth Estates Ltd, which came under the control of Sir Lindsay Parkinson & Co Ltd.[2]

Wentworth Club is best known for its associations with professional golf. It has three eighteen-hole courses: the famous Harry Colt-designed West Course from 1926, the earlier yet lesser played East Course which was also designed by Colt in 1924, the recent Edinburgh Course designed by John Jacobs, and a nine-hole par-3 executive course.

The headquarters of the PGA European Tour are located at the club, and each year it hosts the Tour's BMW PGA Championship. It was the venue of the 1953 Ryder Cup and of the HSBC World Match Play Championship from 1964 until 2007.[3]

The club is surrounded by and entwined with the Wentworth Estate, one of the most expensive private estates in the London suburbs, which was built at the same time, where many top golfers and other celebrities have homes. One of them is Ernie Els, who became the club's "world-wide touring professional" in 2005. Over the winter of 2005-06 Els, who is developing a golf course design practice, made alterations to the West Course, lengthening it by 310 yards (280 m) and adding 30 bunkers.[4]

In 2004 the club was purchased by fashion industry entrepreneur Richard Caring for £130 million and in 2014, the club was sold to Beijing-based Reignwood Investments for £135m. 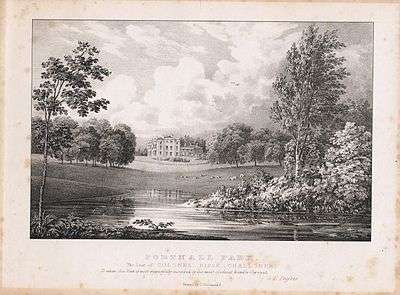 View of Portnall Park, from the south-east, published in 1828. Once the heart of Colonel Bisse-Challoner's c. 400-acre (+200 rented) estate, it is now known as the Dormy House. The sheep mark the position of the present fairway