Ehsan Hajsafi (Persian: احسان حاج‌صفی‎‎, born February 26, 1990) is an Iranian footballer who plays for Sepahan in the Iran Pro League. He is a member of the Iranian national team.

Hajsafi is regarded as a utility player, being able to play as left midfielder, left back, defensive midfielder, and winger.[2][3]

In 2009, Hajsafi was selected by Goal.com as the most promising player in Asian football.[4] Hajsafi has represented Iran at the 2011 AFC Asian Cup, the 2014 FIFA World Cup and the 2015 AFC Asian Cup, in addition to Sepahan at the 2007 FIFA Club World Cup. 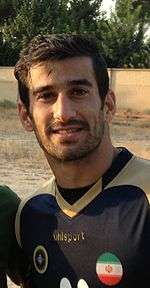 He started his career in Zob Ahan in 2000 and left the club in 2006, joining Sepahan. He was extracted from Sepahan youth academy by Luka Bonačić.[5] Hajsafi played two matches from the start in the 2007 FIFA Club World Cup and has been a regular for Sepahan during recent seasons. Sepahan came second in the 2007 AFC Champions League.

Ehsan takes set pieces for Sepahan and plays both in central and left midfield, having scored six league goals for Sepahan in the 2007–08 season. In the last game of the league match against Persepolis, Hajsafi scored a goal for Sepahan that could have granted Sepahan the title, but Persepolis scored the vital winning goal in stoppage time to win the title. He continued to perform well and scored wonderful goals for Sepahan in the 2008–09 season. He was tested as the left back in the 2009–10 season when Sepahan won the league, and extended his contract with Sepahan for two another years.[6]

In June 2011, Hajsafi signed a one and a half year loan conscription contract with Tractor Sazi, reuniting him with former coach Amir Ghalenoei.[7] Tractor finished second in the league, their best results in club history. His contract with Tractor ended in January 2012, and he returned to Sepahan.

He returned to Sepahan in January 2012, beginning this time with coach Zlatko Kranjčar. He won the Hazfi Cup with the team and extended his contract with Sepahan for another two seasons at the end of the season. In August 2014 after the end of his contract Hajsafi was close to signing with Championship side Fulham, but the deal fell through due to work permit issues.[8] Hajsafi returned to Iran and extended his contract for another two seasons with Sepahan.

On 30 August 2015, Hajsafi joined FSV Frankfurt in the German 2. Bundesliga with a two-year contract.[9] He made his league debut on 13 September 2015 as a second-half substitute against Eintracht Braunschweig.[10] He made his first start a week later as a left-back on 20 September in a 1–0 league win over MSV Duisburg.[11] Hajsafi quickly established himself as the set-piece taker. Hajsafi scored his first goal for FSV Frankfurt on 2 March 2016 in a 3–3 draw against MSV Duisburg.[12] On 13 March 2016 Hajsafi scored from 50 yards against Freiburg.[13]

After FSV was relegated to the 3. Liga, the club announced that they had annulled the contract of Hajsafi and he was a free agent and could sign with any club. 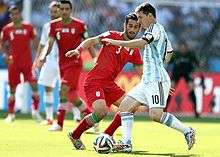 Hajsafi competed for the Iran national under-17 football team at the 2006 AFC Youth Championship. He later went on to appear for the U-20 and U-23 teams.

On 25 May 2008, Hajsafi played his first A national team match for Iran in a friendly game against Zambia. He shone in his debut with two brilliant assists in Iran's 3–2 win at Azadi Stadium. On 2 June, he then played in Iran's 2010 FIFA World Cup World Cup qualification against United Arab Emirates at home. In the return game, Hajsafi came on as a substitute to help Iran win the crucial away game.

His first international goal was against Qatar in the 2008 West Asian Football Federation Championship, when Iran went on to win 6–1. He played in 2011 AFC Asian Cup qualification, which was considered the best left side of the competition. He also played for the team in the tournament, in which Iran was eliminated in the Round 16 by South Korea. In March 2014, he was assigned as captain for the first time in his 57th national cap against Kuwait.

On 1 June 2014, he was called into Iran's 2014 FIFA World Cup squad by Carlos Queiroz.[15] He played the full 90 minutes in Iran's first match against Nigeria which ended 0–0. He then started in a match against Argentina and was one of the key players in the match. He substituted in the 88th minute and then Argentina scored their lone goal by Lionel Messi. He also played 63 minutes in Iran's final match against Bosnia and Herzegovina. Iran were eliminated in the group stages. He was called into Iran's 2015 AFC Asian Cup squad on 30 December 2014 by Carlos Queiroz.[16] On 11 January 2015, in Iran's opening match of the tournament, Hajsafi scored the first goal and was named man of the match in a 2–0 win against Bahrain. 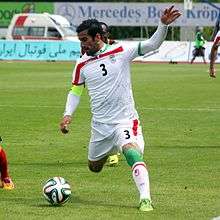 Hajsafi captaining Iran, against Angola, 26 May 2014