Harold Joseph "Pie" Traynor (November 11, 1898 – March 16, 1972) was an American professional baseball player, manager, scout and radio broadcaster.[1] He played his entire Major League Baseball (MLB) career (1920–37) as a third baseman with the Pittsburgh Pirates.[1] He was inducted into the Baseball Hall of Fame in 1948.[2]

Following the Second World War, Traynor was often cited as the greatest third baseman in MLB history. In recent years his reputation has diminished, with the modern-era careers of third basemen such as Eddie Mathews, Brooks Robinson, Mike Schmidt and George Brett moving to the forefront in the memories of baseball fans.[3][4][5]

Traynor was born in Framingham, Massachusetts, to parents who had emigrated from Canada.[6] He received his nickname as a child in Somerville, Massachusetts, because he frequented a grocery store and often asked for pie. The store owner called him "Pie Face", which was later shortened to Pie by his friends.[3]

Traynor began his professional baseball career in 1920 as a shortstop for the Portsmouth Truckers of the Virginia League.[7] He was asked by a Boston Braves scout to work out with the team at Braves Field, but the scout forgot to tell Braves manager George Stallings.[8] Stallings ran Traynor off the field, telling him not to return.[8] Traynor made his major league debut with the Pittsburgh Pirates at the age of 21 on September 15, 1920, appearing in 17 games that season.[1] He appeared in 10 games for the Pirates in 1921, but spent the majority of the season playing for the Birmingham Barons.[7] He posted a .336 batting average in 131 games for the Barons, but he committed 64 errors as a shortstop.[6][7]

Traynor became the Pirates' regular third baseman in 1922, hitting for a .282 batting average with 81 runs batted in.[1] Following the advice of Rogers Hornsby, he began using a heavier bat in 1923 and blossomed into one of the best hitters in the National League (NL) . He hit above .300 for the first time with a .338 batting average along with 12 home runs and 101 runs batted in.[1][6] With tutoring provided by teammate Rabbit Maranville, his defense also began to improve, leading National League third basemen in putouts and assists.[6][9]

In 1925, Traynor posted a .320 average with six home runs, 106 runs batted in and led the league in fielding percentage as the Pirates won the NL pennant by  8 1⁄2 games over the New York Giants.[1][10] In the 1925 World Series, he hit .347 including a home run off future Hall of Fame pitcher Walter Johnson as the Pirates defeated the Washington Senators in a seven-game series.[11][12] Traynor ended the season eighth in Most Valuable Player (MVP) Award balloting.[13] His 41 double plays in 1925 set an NL record for third basemen that stood for 25 years.[6]

The Pirates won the pennant again in 1927 with Traynor hitting .342 with five home runs and 106 runs batted in, but they lost to the New York Yankees in the 1927 World Series.[1][14] In November of that year, members of the Baseball Writers' Association of America selected him as the third baseman for the 1927 all-star major league team.[15] Traynor hit .337 and produced a career-high 124 runs batted in during the 1928 season despite hitting only three home runs and finished in sixth place in the NL MVP Award balloting.[1] He continued to be a cornerstone for the Pirates, posting a .356 batting average in 1929.[1]

Traynor hit for a career-high .366 average in 1930.[1] A different baseball was used in MLB in 1931, and Traynor's batting average decreased to .298. Despite the decline in his average, Traynor supported the use of the new ball, saying that the 1930 ball had caused too large of an advantage for hitters and had led to lopsided games that had ultimately decreased interest in the sport.[16] In 1933 MLB held its inaugural All-Star Game and, Traynor was selected as a reserve player for the NL team.[17][18] 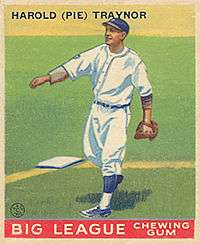 Traynor was considered the best fielding third baseman of his era, leading the National League in fielding percentage once, assists and double plays three times and putouts seven times.[21] His 2,289 putouts ranks him fifth all-time among third basemen.[22] His 1,863 games played at third base was a major league record that stood until 1960 when it was surpassed by Eddie Yost.[23] Traynor is the only MLB player to steal home plate in an All-Star Game.[6] Traynor finished in the top ten in voting for the NL's MVP Award six times during his career.[1]

Traynor became the Pirates' player-manager during the 1934 season.[24] He retired as an active player after the 1937 season, but continued as the Pirates' manager.[25] He almost won another pennant as a manager in 1938, as the Pirates led the NL for most of the season before faltering to the Chicago Cubs in the famous "Homer in the Gloamin'" game at Wrigley Field.[26] The loss of the pennant devastated Traynor.[6] He seemed to lose confidence in his team, and after a sixth-place finish in 1939, he resigned after five seasons as the manager of the Pirates.[6]

After spending time as a scout for the Pirates, Traynor eventually took a job as a sports director for a Pittsburgh radio station in 1944.[6] His radio broadcasts became popular with Pittsburgh sports fans and he remained at the job for 21 years.[6] Traynor retired from broadcasting in 1965. In 1948, Traynor was selected to the Baseball Hall of Fame, being the first third baseman to be chosen by the Baseball Writers' Association of America.[2] In 1969, as part of the observance of the centennial of professional baseball, Traynor was named the third baseman on MLB's all-time team.[6] In 1971, he threw out the first pitch of Game 3 of the 1971 World Series at Three Rivers Stadium.[6] He died in 1972 in Pittsburgh, Pennsylvania, not long after the Pirates moved into Three Rivers Stadium and retired his uniform number 20.[27][28] Traynor was buried in Homewood Cemetery in Pittsburgh.

In 1999, he ranked number 70 on The Sporting News' list of the 100 Greatest Baseball Players, and was nominated as a finalist for the Major League Baseball All-Century Team.[29][30] Baseball historian Bill James ranked Traynor 15th all-time among third baseman in his Historical Baseball Abstract.[4]