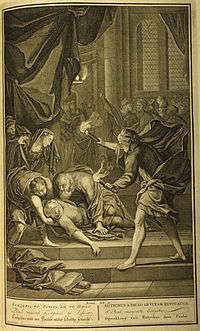 Not to be confused with Eutychius or the early Christian theologian Eutyches.

Eutychus was a young man (or a youth) of Troas tended to by St. Paul. Eutychus fell asleep due to the long nature of the discourse Paul was giving and fell from a windowsill out of the three story building.[1] Paul then embraced him, insisting that he was not dead, and they carried him back upstairs alive; those gathered then had a meal and a long talk which lasted until dawn. This is related in the New Testament book of the Acts of the Apostles 20:7-12.

Though some (e.g. William Barclay, F. F. Bruce), do not believe that Eutychus died, Wayne Jackson observes the following facts: 1) the author Luke, a physician (Col. 4:14), plainly states that Eutychus was "taken up dead" (Greek: ἤρθη νεκρός, erthe nekros); 2) after Paul embraces Eutychus, he says, "Trouble not yourselves, for his life is in him" (Greek: ἡ γὰρ ψυχὴ αὐτοῦ ἐν αὐτῷ ἐστιν, he gar psuche autou en auto estin), not "still in him" as the Weymouth translation erroneously interprets; 3) Eutychus was then "brought alive" by which the others were "not a little comforted," which words would make no sense if Eutychus had not died; and 4) Luke was fully capable of describing someone as only being "supposedly dead" (Greek: νομισαντες αυτον τεθναναι), as he did of Paul in Acts 14:19, but he did not do so here.[2] However, Eutychus' complete recovery from a three-story fall, regardless of the initial result, and Paul's attendance at the scene of the accident, appears to be the impact of the narrative.