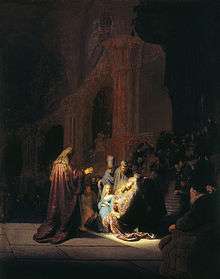 Simeon in the Temple, by Rembrandt van Rijn, 1631

Simeon (Simeon the God-receiver) at the Temple is the "just and devout" man of Jerusalem who, according to Luke 2:25–35, met Mary, Joseph, and Jesus as they entered the Temple to fulfill the requirements of the Law of Moses on the 40th day from Jesus' birth at the presentation of Jesus at the Temple.

According to the Biblical account, Simeon had been visited by the Holy Spirit and told that he would not die until he had seen the Lord's Christ. On taking Jesus into his arms he uttered a prayer, which is still used liturgically as the Latin Nunc dimittis in many Christian churches, and gave a prophecy alluding to the crucifixion.

In some Christian traditions, this meeting is commemorated on February 2 as Candlemas or more formally, the Presentation of the Lord, the Meeting of the Lord, or the Purification of the Virgin. His prophecy is used in the context of Our Lady of Sorrows. Simeon is venerated as a saint in the Roman Catholic, Eastern Orthodox and Oriental Orthodox traditions. His feast day is February 3.

Main article: Presentation of Jesus at the Temple

The sole mention in the New Testament of Simeon is as follows:

Luke 2:25 Now there was a man in Jerusalem, whose name was Simeon, and this man was righteous and devout, waiting for the consolation of Israel, and the Holy Spirit was upon him. 26 And it had been revealed to him by the Holy Spirit that he would not see death before he had seen the Lord's Christ. 27 And he came in the Spirit into the temple, and when the parents brought in the child Jesus, to do for him according to the custom of the Law, 28 he took him up in his arms and blessed God and said, 29 “Lord, now you are letting your servant depart in peace, according to your word; 30 for my eyes have seen your salvation 31 that you have prepared in the presence of all peoples, 32 a light for revelation to the Gentiles, and for glory to your people Israel.” 33 And his father and his mother marveled at what was said about him. 34 And Simeon blessed them and said to Mary his mother, “Behold, this child is appointed for the fall and rising of many in Israel, and for a sign that is opposed 35 (and a sword will pierce through your own soul also), so that thoughts from many hearts may be revealed.” ESV

The text suggests that Simeon was the officiating priest. Some writers have identified this Simeon with Shimon ben Hillel, though Hillel was not a priest.[1]

According to a tradition in the Eastern Orthodox Church, Simeon had been one of the seventy-two translators of the Septuagint. As he hesitated over the translation of Isaiah 7:14 (LXX: "Behold, a virgin shall conceive...") and was going to correct it to γυνή (woman), an angel appeared to him and told him that he would not die until he had seen the Christ born of a virgin. This would make him well over two hundred years old at the time of the meeting described in Luke, and therefore miraculously long-lived.[2] 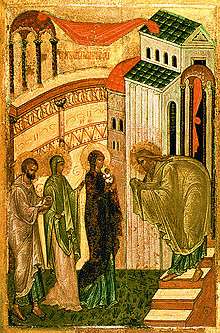 The Meeting of Our Lord (Russian icon, 15th century)

The events in the life of Saint Simeon the Righteous are observed on both February 2 and 3. The observances of the first day center around memorializing the act of Mary undergoing an act of ritual purification, and presenting Jesus, her child, to the Temple, a feast day known as the Presentation of Jesus at the Temple. Since this day focuses more on Jesus and Mary, the observation on February 3 is specific to St. Simeon, who was allowed to die after seeing the Christ (or Messiah) born of a virgin. In Christian tradition, the day of a saint's death is often celebrated as his feast day.

Under Mosaic law, a mother who had given birth to a man-child was considered unclean for seven days; moreover she was to remain for three and thirty days "in the blood of her purification", which makes a total of 40 days. The Christian Feast of the Purification therefore corresponds to the day on which Mary, according to Jewish law (see Leviticus 12:2–8), should have attended a ceremony of ritual purification. The Gospel of Luke 2:22–39 relates that Mary was purified according to the religious law, followed by Jesus's presentation in the Jerusalem temple, and this explains the formal names given to the festival.

In the liturgy of Evening prayer in the Anglican communion, tens of millions of Anglicans recite the Nunc dimittis – or sing it in Evensong in the canticle known as the Song of Simeon – almost every single evening. It is also used in the Roman Catholic Compline and Orthodox Vespers. The Nunc dimittis has been set to music by many notable composers, such as Rachmaninoff (All-Night Vigil).

The feast on February 2 is often referred to as Candlemas, as in honor of the ritual purification of the Virgin Mary, candles (of beeswax) which will be used for the entire year are brought into a church and blessed. In the Roman Catholic Church, the Presentation is the fourth Joyful Mystery of the Rosary. In the Church of England, the Presentation of Christ in the Temple is a Principal Feast. In the Eastern Orthodox Church, it is one of the twelve Great Feasts. 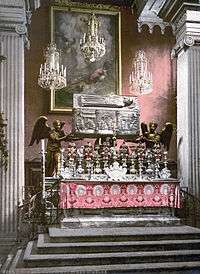 Chest of Saint Simeon from year 1380 in Zadar, photographed around 1900

This feast day has a number of different names:

Simeon the Righteous is commemorated in his own right on February 3. In the Anglican Communion, Simeon is not venerated with a festal observance, and February 3 is set aside to recognize Anskar (801–865), a missionary, Archbishop of Hamburg-Bremen and first Bishop in Sweden, 864.

While both the Catholic and Orthodox Churches agree on the setting of the date of Candlemas on the 40th day after Christmas (in accordance with the Mosaic Law), the difference in the marking of Christmas—December 25 results over a theological dispute related to the adoption of the Gregorian calendar over the older Julian Calendar. December 25 currently occurs 13 days later on the Julian Calendar than on the Gregorian calendar. The Gregorian revision of the calendar occurred in 1582, well after the Great Schism between the Eastern and Western Christian churches in 1054.

The Armenian Apostolic Church celebrates the Nativity of Christ on January 6, and so their celebration of the Presentation, which they call The Coming of the Son of God into the Temple is on February 14.