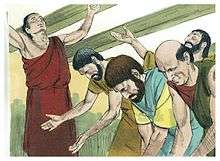 Manahen (also Manaen or Menachem) was a teacher in the first century Christian Church at Antioch who had been 'brought up' (Greek: συντροφος, syntrophos, Vulgate: collactaneus) with Herod Antipas.[1]

Little is known of Manahen's life. According to the Acts of the Apostles he was one of the prophets and teachers who, under the influence of the Holy Spirit, laid hands upon Saul and Barnabas and sent the two apostles on the first of Paul's missionary journeys (Acts 13:1). He is said to have been 'brought up' with Herod the tetrarch. Many biblical translations describe him as Herod's 'foster brother' [2] or as his 'life-long friend'.[3]

In A.D. 39, Antipas left for Rome to gain the favor of Caligula, but instead received an order of perpetual exile. (Jos., "Ant.", XVIII, vii, 2). During this time, the Church of Antioch was founded by Jewish Christians, who "had been dispersed by the persecution that arose on the occasion of Stephen" and had taught the Gospel also to the Greeks of Antioch, (Acts 11:19-24). It is quite likely that St. Manahen was one of these founders of the Antiochene Church.

His feast day is celebrated on May 23[4] in the Orthodox Church and on May 24[5] in the Roman Catholic Church.