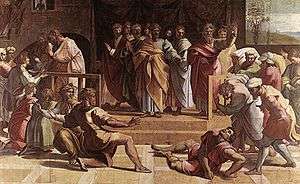 The Death of Ananias, by Raphael

Ananias /ˌænəˈnaɪ.əs/ and his wife Sapphira /sæˈfaɪərə/ were, according to the Acts of the Apostles chapter 5, members of the early Christian church in Jerusalem. The account records their sudden deaths after lying to the Holy Spirit about money.

Their story is rarely shown in art, but is the subject of one of the Raphael Cartoons, and a panel on the Brescia Casket, both illustrated here. 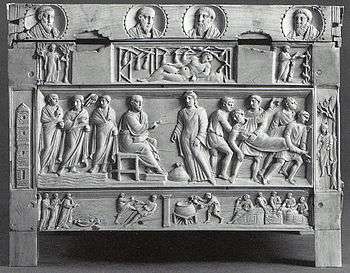 Acts chapter 4:32 closes by stating that the first followers of Jesus did not consider their possessions to be their own but rather held in common, in order to use what they had on behalf of those in want. For example, Barnabas, a Levite from Cyprus, sold a plot of land and donated the proceeds to the apostles.

As told at the beginning of Acts chapter 5 Ananias and Sapphira, following Barnabas' example, also sold their land but secretly withheld a portion of the proceeds. Ananias presented his donation to Peter. Peter replied, "Why is it that Satan has so filled your heart that you have lied to the Holy Spirit?" Peter pointed out that Ananias was in control of the money and could give or keep it as he saw fit, but had withheld a portion of it. Peter stated that Ananias had lied not to men, but to God. Ananias died on the spot and was carried out. Everyone who heard about the incident feared the Lord. Three hours after Ananias' death his wife arrived, unaware of what had happened. Peter asked her the price of the land that she and Ananias had sold, and she stated the same untruthful price that Ananias had given. She also fell dead.

The fourth-century archbishop John Chrysostom alludes to and then dismisses the idea that Peter could be held responsible for the couple's death (Homily 3 on Galatians).

The morality of the incident has been the source of some commentary. Dunn (1996) describes it as 'one of the most unnerving episodes in the whole of the New Testament.' Many scholars have noted parallels with the story of Achan (Joshua 7), and Havelaar (1997) notes various parallel events in pagan literature, in particular one close parallel in an event recounted by Herodotus about a certain Glaucus who tried to tempt the gods at Delphi by lying about money he had kept dishonestly, and was subsequently deprived of descendants.[1][2][3]

Darrell Bock concludes that the episode emphasises the seriousness of sin, as well as the graciousness of God who often defers judgment. The church is not composed of perfect people, but sins including pride and deceit will eventually be dealt with.[4]

The Lutheran New Testament Professor Matthew L. Skinner notes the story is meant to be gallows humour. He states that, "The story aims for gallows humor, but we read Acts in a different place today. Our familiarity with religiously sanctioned violence makes it difficult to laugh, even if we understand that this scene may not be offered as serious, definitive theology."[5]

Marc Pernot, Calvinist pastor at L'Oratoire du Louvre, sees the story as a critique of the shortcomings of Peter and the early Church. "When men want to impose unity, there are problems. … Jesus never instituted a system requiring people to liquidate all their capital... This is compulsory morality... Luke, the author of the book of Acts thus presents Peter and his first church rather critically. In my opinion it is not the only time, because if Peter seems to be the leader of the Church of Jerusalem in the days of Ananias and Sapphira, later in the book of Acts (Acts 15 and Galatians 2:8) we see that he has lost the first place..."[6]

Pernot sees the deaths in the story as metaphors: "Ananias literally means "the grace of the Lord." With the attitude of the apostle Peter, the concept of grace disappears; his mercy is as dead as Ananias, but grace also dies for the whole community with the death of Ananias... Sapphira, in Hebrew, means "sapphire"... which evokes God's throne. Peter dynamites God's throne when he confuses lying to the Church with lying to God... The result, says the text, is a great fear among the people. They come in numbers because the lever of blackmail and fear works well. But it is no longer grace, it is fear for oneself and the hope of benefit to oneself as seen at the end of this text with the crowd waiting for miracles. People like Ananias and Sapphira could no longer really feel free to assume their personal choices, inspired by their intelligence and their faith... The Gospel of Christ is God's grace."[7]