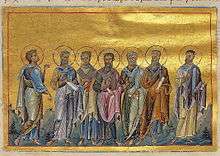 Tychicus (/ˈtɪtʃikəs/),[1] an Asiatic Christian who, with Trophimus, accompanied the Apostle Paul on a part of his journey from Macedonia to Jerusalem. He is also alluded to have been with Paul in Rome, where the apostle sent him to Ephesus, probably for the purpose of building up and encouraging the church there.[2] In the New Testament, he is mentioned five times (Acts 20:4; Ephesians 6:21; Colossians 4:7; Titus 3:12; 2 Timothy 4:12).[3]

Appearance in the Bible

(1) Acts 20:4 states that Tychicus was from the Roman province of Asia. The Western text indicates that he was an Ephesian.

(2) In Ephesians 6:21, the author (traditionally identified as Paul) calls Tychicus a "dear brother and faithful servant in the Lord" (NIV),

(3) while in Colossians, he says he is "a dear brother, a faithful minister and fellow servant in the Lord."

In both Ephesians and Colossians, the author indicates that he is sending Tychicus to the Christians to whom he is writing, in order to encourage them.[3]

(4) The passages in the Epistle to Titus (Titus 3:12) and to Timothy show that Tychicus was again with Paul after the appeal to the emperor had resulted in the apostle regaining his freedom. The passage in Titus evidently refers to the interval between Paul's first and second Roman imprisonments, and while he was again engaged in missionary journeys. The apostle writes to Titus, who was in Crete in charge of the churches there, that he intended to send either Artemas or Tychicus to him, so as to take the oversight of the work of the gospel in that island so that Titus might be free to come to be with the apostle at Nicopolis.[2]

(5) The last passage where Tychicus is mentioned occurs in 2 Timothy, which was written in Rome not long before Paul's execution. To the very end Paul was busy as ever in the work of the gospel; and though it would have been a comfort to him to have his friends beside him, yet the interests of the kingdom of Christ are uppermost in his thoughts, and he sends these friends to help the progress of the work. To the last, Tychicus was serviceable as ever: "Tychicus I sent to Ephesus" (2 Timothy 4:12). As Timothy was in charge of the church in Ephesus (1 Timothy 1:3), the coming of Tychicus would set him free, so as to enable him to set off at once to rejoin Paul at Rome, as the apostle desired him (2 Timothy 4:9, 2 Timothy 4:21).[2]

The Catholic Encyclopedia notes that different traditions make him out to be the Bishop of Colophon, Chalcedon or Neapolis in Cyprus.[4]

Hippolytus of Rome lists Tychicus as one of the seventy disciples. His feast is kept on 29 April.[4]