Tiberius featured on a coin struck by Philip the Tetrarch 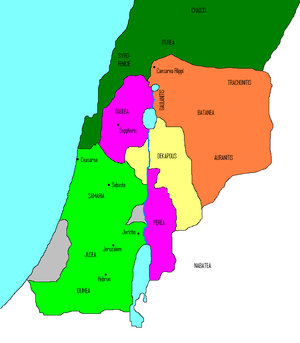 Philip the Tetrarch, sometimes called Herod Philip II (Greek: Ηρώδης Φίλιππος, Hērōdēs Philippos) by modern writers (ruled from 4 BC until his death in AD 34) was the son of Herod the Great and his fifth wife, Cleopatra of Jerusalem. He was a half-brother of Herod Antipas and Herod Archelaus; and should not be confused with Herod II, whom some writers call Herod Philip I.

Philip inherited the northeast part of his father's kingdom, which included Iturea and Trachonitis;[1] and possibly Gaulanitis and Paneas, as was noted by Flavius Josephus.[2]

Augustus Caesar made his own division of Herod's kingdom, giving one half to Archelaus, while dividing the other half into two, going to Antipas and Philip. Batanea, along with Trachonitis and Auranitis (with a certain part of what was called the House of Zenodorus), paid the annual tribute of one hundred talents to Philip.[3]

Philip married his niece Salome, the daughter of Herodias and Herod II (sometimes called Herod Philip I,[4] and also a member of the Herodian dynasty). This Salome appears in the Bible in connection with the execution of John the Baptist. The gospels of Matthew and Mark state that the Herodias whom Herod Antipas married was the wife of Antipas' brother "Philip", but according to Josephus she was the wife of another half-brother, Herod II. It is known that Philip the Tetrarch rebuilt the city of Caesarea Philippi, calling it by his own name to distinguish it from the Caesarea on the sea-coast, which was the seat of the Roman government.