A hand plane is a tool for shaping wood using muscle power to force the cutting blade over the surface of a material. Some rotary power planers are motorized power tools used for the same types of larger tasks, but are unsuitable for fine scale planing where a miniature hand plane is used.

When powered by electricity to the breadth of a board or panel, the tool may be called a thickness planer or planer which are designed to shape, flatten, and finish larger boards or surfaces.

Generally all planes are used to flatten, reduce the thickness of, and impart a smooth surface to a rough piece of lumber or timber. Planing is also used to produce horizontal, vertical, or inclined flat surfaces on workpieces usually too large for shaping, where the integrity of the whole requires the same smooth surface. Special types of planes are designed to cut joints or decorative mouldings.

Hand planes are generally the combination of a cutting edge, such as a sharpened metal plate, attached to a firm body, that when moved over a wood surface, take up relatively uniform shavings, by nature of the body riding on the 'high spots' in the wood, and also by providing a relatively constant angle to the cutting edge, render the planed surface very smooth. A cutter which extends below the bottom surface, or sole, of the plane slices off shavings of wood. A large, flat sole on a plane guides the cutter to remove only the highest parts of an imperfect surface, until, after several passes, the surface is flat and smooth. When used for flattening, bench planes with longer soles are preferred for boards with longer longitudinal dimensions. A longer sole registers against a greater portion of the board's face or edge surface which leads to a more consistently flat surface or straighter edge. Conversely, using a smaller plane allows for more localized low or high spots to remain.

Though most planes are pushed across a piece of wood, holding it with one or both hands, Japanese planes are pulled toward the body, not pushed away.

Woodworking machinery that perform a similar function as hand planes include the jointer and the thickness planer, also called a thicknesser; the job these specialty power tools can still be done by hand planers and skilled manual labor as it was for many centuries. When rough lumber is reduced to dimensional lumber, a large electric motor or internal combustion engine will drive a thickness planer that removes a certain percentage of excess wood to create a uniform, smooth surface on all four sides of the board and in specialty woods, may also plane the cut edges.

A pair of wooden planes found on board the 16th century carrack Mary Rose.

Hand planes are ancient, originating thousands of years ago. Early planes were made from wood with a rectangular slot or mortise cut across the center of the body. The cutting blade or iron was held in place with a wooden wedge. The wedge was tapped into the mortise and adjusted with a small mallet, a piece of scrap wood or with the heel of the user's hand. Planes of this type have been found in excavations of old sites as well as drawings of woodworking from medieval Europe and Asia. The earliest known examples of the woodworking plane have been found in Pompeii although other Roman examples have been unearthed in Britain and Germany. The Roman planes resemble modern planes in essential function, most having iron wrapping a wooden core top, bottom, front and rear and an iron blade secured with a wedge. One example found in Cologne has a body made entirely of bronze without a wooden core.[1] A Roman plane iron used for cutting moldings was found in Newstead, England.[2] Histories prior to these examples are not clear although furniture pieces and other woodwork found in Egyptian tombs show surfaces carefully smoothed with some manner of cutting edge or scraping tool. There are suggestions that the earliest planes were simply wooden blocks fastened to the soles of adzes to effect greater control of the cutting action.

In the mid-1860s, Leonard Bailey began producing a line of cast iron-bodied hand planes, the patents for which were later purchased by Stanley Rule & Level, now Stanley Works. The original Bailey designs were further evolved and added to by Justus Traut and others at Stanley Rule & Level. The Bailey and Bedrock designs became the basis for most modern metal hand plane designs manufactured today. The Bailey design is still manufactured by Stanley Works.

In 1918 an air-powered handheld planing tool was developed to reduce shipbuilding labor during World War I. The air-driven cutter spun at 8000 to 15000 rpm and allowed one man to do the planing work of fifteen men who used manual tools.[3]

Modern hand planes are made from wood, ductile iron or bronze which produces a tool that is heavier and will not rust. 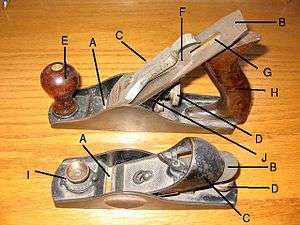 Parts of a plane

Two styles of plane are shown with some parts labeled. The top of the image is a bench plane; the bottom is a block plane.

A bench plane iron with chipbreaker.

Bench planes are characterized by the cutting iron bedded with the bevel facing down and attached to a chipbreaker. Most metal bench planes, and some larger wooden ones, are designed with a rear handle known as a tote. Block planes are characterized by the absence of a chipbreaker and the cutting iron bedded with the bevel up. The block plane is usually a smaller tool that can be held with one hand and is used for general purpose work such as taking down a knot in the wood, smoothing small pieces, chamfering edges, and making the end of a sawed board square and smooth.

A typical order of use in flattening, truing, and smoothing a rough sawn board might be:

Planes may also be classified by the material of which they are constructed:

Some special types of planes include: 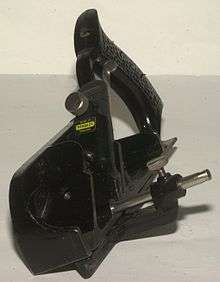 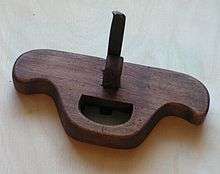 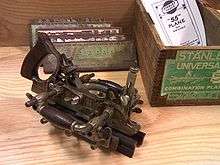 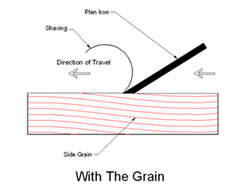 Planing with the grain. 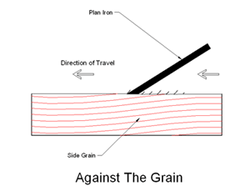 Planing against the grain.

Planing wood along its side grain should result in thin shavings rising above the surface of the wood as the edge of the plane iron is pushed forward, leaving a smooth surface, but sometimes splintering occurs. This is largely a matter of cutting with the grain or against the grain respectively, referring to the side grain of the piece of wood being worked.

The grain direction can be determined by looking at the edge or side of the work piece. Wood fibers can be seen running out to the surface that is being planed. When the fibers meet the work surface it looks like the point of an arrow that indicates the direction. With some very figured and difficult woods, the grain runs in many directions and therefore working against the grain is inevitable. In this case, a very sharp and finely-set blade is required.

When planing against the grain, the wood fibers are lifted by the plane iron, resulting in a jagged finish, called tearout.

Planing across the grain is sometimes called "traverse" or "transverse" planing.

Planing the end grain of the board involves different techniques, and frequently different planes designed for working end grain. Block planes and other bevel-up planes are often effective in planing the difficult nature of end grain. These planes are usually designed to use an iron bedded at a "low angle," typically about 12 degrees.