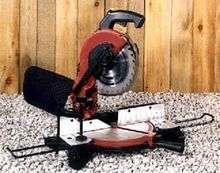 A circular saw is a tool for cutting many materials such as wood, masonry, plastic, or metal and may be hand-held or mounted to a machine. In woodworking the term "circular saw" refers specifically to the hand-held type and the table saw and chop saw are other common forms of circular saws. "Skil saw" has become a generic trademark for conventional hand-held circular saws. Circular saw blades are specially designed for each particular material they are intended to cut and in cutting wood are specifically designed for making rip-cuts, cross-cuts, or a combination of both. Circular saws are commonly powered by electricity, but may be powered by a gasoline engine or a hydraulic motor which allows it to be fastened to heavy equipment, eliminating the need for a separate energy source.[1]

Sawmills first used smaller diameter circular saws to resaw dimension lumber such as lath and wall studs and for edging boards. As the technology advanced large diameter saw blades began to be used for the head saws and to cut clapboards.

Claims to the invention of the circular saw include:

In addition to hand-held circular saws (see below), different saws that use circular saw blades include:

Originally, circular saws in mills had smaller blades and were used to resaw lumber after it passed through an "up and down" (muley or sash) saw leaving both vertical and circular saw marks on different sides of the same piece. These saws made it more efficient to cut small pieces such as lath. After 1813 or 1822 saw mills use large circular saws, up to 3 meters (9 ft) in diameter. Large saws demand more power than up-and-down saws and did not become practical for sawing timbers until they were powered by steam engines. They are either left or right-handed, depending on which side of the blade the plank falls away from. Benching determines which hand the saw is. Saws of this size typically have a shear pin hole, off axis, that breaks if the saw is overloaded and allows the saw to spin free. The most common version is the ITCO (insert tooth cut-off) which has replaceable teeth. Sawmill blades are also used as an alternative to a radial arm saw. 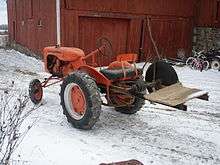 Allis-Chalmers B with a cordwood saw setup

Cordwood saws, also called buzz saws in some locales, use blade of a similar size to sawmills. Where a sawmill rips (cuts with the grain) a cordwood saw crosscuts (cuts across the grain). Cordwood saws can have a blade from 20 inches (51 cm) to more than 36 inches (91 cm) diameter depending on the power source and intended purpose. Cordwood saws are used to cut logs and slabs (sawmill waste) into firewood. The Cord (unit) is the standard measurement of standing timber (by estimation) or rough logs. "Cordwood" means unsplit logs four feet long. In the nineteenth and early twentieth centuries, farmers would supply householders in town with cordwood, which would then be re-sawn and split to a length and circumference suitable for woodburning heaters and ranges. Almost all these devices were designed to accept 16-inch sticks, conveniently a piece of cordwood cut into three equal lengths. Once a piece of cordwood had been re-sawn to three 16-inch pieces, it could easily be split to stovewood size with an ax.

Most cordwood saws consist of a frame, blade, mandrel, cradle, and power source. The cradle is a tilting or sliding guide that holds logs during the cutting process. Some cordwood saws are run from a belt from a farm tractor power takeoff pulley. Others, mounted on a tractor's three-point hitch, connect to the rear power takeoff shaft. Self-powered models are equipped with small gasoline engines or even large electric motors as power sources. The mandrel is a shaft and set of bearings that support and transfer power to the blade. The frame is a structure that supports the cradle and blade at a convenient working height.

Cordwood saws were once very popular in rural America. They were used to cut smaller wood into firewood in an era when hand powered saws were the only other option. Logs too large for a cordwood saw were still cut by hand. Chainsaws [10] have largely replaced cordwood saws for firewood preparation today. Still, some commercial firewood processors and others use cordwood saws to save wear and tear on their chainsaws. Most people consider cordwood saws unsafe and outdated technology. 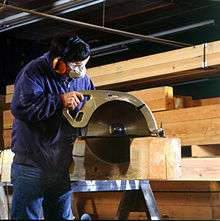 In woodworking the term circular saw is most commonly used to refer to a hand-held, electric circular saw designed for cutting wood, but may be used for cutting other materials with different blades. Circular saws can be either left or right-handed, depending on the side of the blade where the motor sits. A left-handed saw is typically easier to use if held in the right hand, and contrariwise for the right-handed saw, because the user does not need to lean across the saw to see the cutting line.

Blades for cutting wood are almost universally tungsten carbide tipped (TCT), but high speed steel (HSS) blades are also available. The saw base can be adjusted for depth of cut and can tilt up to 45° and sometimes 50° in relation to the blade. Adjusting the depth of cut helps minimize kickback. Different diameter blades are matched to each saw and are available ranging from 14 centimetres (5.5 in) to 61 centimetres (24 in).

The saw can be designed for the blade to mount directly to the motor's driveshaft known colloquially as a sidewinder, or be driven indirectly by a perpendicularly mounted motor via worm gears, garnering considerably higher torque called a worm-drive saw.

The worm-drive portable circular saw was invented in 1923 by Edmond Michel. In 1924 Michel formed a partnership with Joseph Sullivan, and together they started the Michel Electric Handsaw Company, with the sole purpose of manufacturing and marketing the saw invented by Michel. The company later renamed itself Skilsaw Inc., which today is a subsidiary of Robert Bosch GmbH. Portable circular saws are often still called Skilsaws or Skil saws. Its successor is still sold by Skil as the model 77. To get around the Skil patents, Art Emmons of Porter-Cable invented the direct-drive sidewinder saw in 1928. Recently smaller cordless circular saws with rechargeable batteries have become popular.

Cold saw(ing) machines are circular saws that are used in many metal cutting operations. The saw blades used are quite large in diameter and operate at low rotational speeds, and linear feeds. There are three common types of blades used in circular saws; solid-tooth, segmental tooth, and the carbide inserted-tooth. The circular saw is typically fed into the workpiece horizontally, and as the saw advances into the material, it severs the material by producing narrow slots. The material is usually held in place during the cutting operation by means of a vise. The chips produced by cutting are carried away from the material by both the teeth of the blade as well as the coolant or other cutting fluid used. 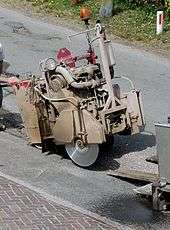 Circular saw with a diamond blade for cutting asphalt and concrete.

The rotary motion of a circular saw lends itself to cutting hard materials like concrete, asphalt, metal, tile, brick, and stone with an abrasive saws like a tile saw. Diamond blades and cut off wheels are commonly used in these applications.