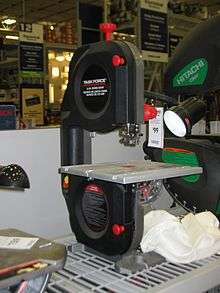 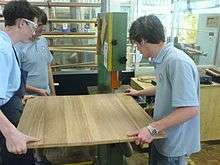 Students maneuver a large laminated board through a bandsaw together

Horizontal bandsaw resawing planks at a boatyard in Hoi AN, Vietnam

Larger resaw at a Mekong delta boatyard, fitted with a 150 mm (6") blade 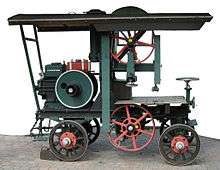 A bandsaw uses a long sharp blade consisting of a continuous band of toothed metal rotating on opposing wheels to cut material. They are used principally in woodworking, metalworking, and lumbering, but may cut a variety of materials. Advantages include uniform cutting action as a result of an evenly distributed tooth load, and the ability to cut irregular or curved shapes like a jigsaw.[1] The minimum radius of a curve is determined by the width of the band and its kerf. Most bandsaws have two wheels connected by a belt or chain rotating in the same plane, one of which is powered, although some may have three or four to distribute the load.

The idea of the band saw dates back to at least 1809, when William Newberry received a British patent for the idea, but band saws remained impractical largely because of the inability to produce accurate and durable blades using the technology of the day.[2] Constant flexing of the blade over the wheels caused either the material or the joint welding it into a loop to fail.

Nearly 40 years passed before Frenchwoman Anne Paulin Crepin devised a welding technique overcoming this hurdle. She applied for a patent in 1846, and soon afterward sold the right to employ it to manufacturer A. Perin & Company of Paris. Combining this method with new steel alloys and advanced tempering techniques allowed Perin to create the first modern band saw blade.[3]

The first American band saw patent was granted to Benjamin Barker of Ellsworth, Maine, in January 1836.[4] The first factory produced and commercially available band saw in the U.S. was by a design of Paul Prybil.[5]

Power hacksaws (with reciprocating blades) were once common in the metalworking industries, but bandsaws and cold saws have mostly displaced them.

Saws for cutting meat are typically of all stainless steel construction with easy to clean features. The blades either have fine teeth with heat treated tips, or have plain or scalloped knife edges. 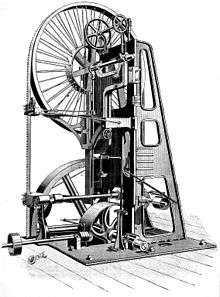 Bandsaws for cutting metal are available in vertical and horizontal designs. Typical band speeds range from 40 feet (12 meters) per minute to 5,000 feet (1,500 meters) per minute, however specialized bandsaws are built for friction cutting of hard metals and run band speeds to 15,000 feet per minute. Metal-cutting bandsaws are usually equipped with brushes or brushwheels to prevent chips from becoming stuck in between the blade's teeth. Systems which cool the blade are also common equipment on metal-cutting bandsaws. The coolant washes away chips and keeps the blade cool and lubricated.

Horizontal bandsaws hold the workpiece stationary while the blade swings down through the cut. This configuration is used to cut long materials such as pipe or bar stock to length. Thus it is an important part of the facilities in most machine shops. The horizontal design is not useful for cutting curves or complicated shapes. Small horizontal bandsaws typically employ a gravity feed alone, retarded to an adjustable degree by a coil spring; on industrial models, the rate of descent is usually controlled by a hydraulic cylinder bleeding through an adjustable valve. When the saw is set up for a cut, the operator raises the saw, positions the material to be cut underneath the blade, and then turns on the saw. The blade slowly descends into the material, cutting it as the band blade moves. When the cut is complete, a switch is tripped and the saw automatically turns off. More sophisticated versions of this type of saw are partially or entirely automated (via PLC or CNC) for high-volume cutting of machining blanks. Such machines provide a stream of cutting fluid recirculated from a sump, in the same manner that a CNC machining center does.

A vertical bandsaw, also called a contour saw, keeps the blade's path stationary while the workpiece is moved across it. This type of saw can be used to cut out complex shapes and angles. The part may be fed into the blade manually or with a power assist mechanism. This type of metal-cutting bandsaw is often equipped with a built-in blade welder. This not only allows the operator to repair broken blades or fabricate new blades quickly, but also allows for the blade to be purposely cut, routed through the center of a part, and re-welded in order to make interior cuts. These saws are often fitted with a built-in air blower to cool the blade and to blow chips away from the cut area giving the operator a clear view of the work. This type of saw is also built in a woodworking version. The woodworking type is generally of much lighter construction and does not incorporate a power feed mechanism, coolant, or welder.

Advancements have also been made in the bandsaw blades used to cut metals. The development of new tooth geometries and tooth pitches have produced increased production rates and greater blade life. New materials and processes such as M51 steel and the cryogenic treatment of blades have produced results that were thought impossible just a few years ago. New machines have been developed to automate the welding process of bandsaw blades as well. Ideal computerized welding machines, setting and cut to length machines and contributions from other manufacturers continue to increase productivity.

Timber mills use very large bandsaws for ripping lumber; they are preferred over circular saws for ripping because they can accommodate large-diameter timber and because of their smaller kerf (cut size), resulting in less waste.

The blades are mounted on wheels with a diameter large enough not to cause metal fatigue due to flexing when the blade repeatedly changes from a circular to a straight profile. It is stretched very tight (with fatigue strength of the saw metal being the limiting factor). Bandsaws of this size need to have a deformation worked into them that counteracts the forces and heating of operation. This is called benching. They also need to be removed and serviced at regular intervals. Sawfilers or sawdoctors are the craftsmen responsible for this work.

The shape of the tooth gullet is highly optimized and designed by the sawyer and sawfiler. It varies according to the mill, as well as the type and condition of the wood. Frozen logs often require a frost notch ground into the gullet to break the chips. The shape of the tooth gullet is created when the blade is manufactured and its shape is automatically maintained with each sharpening. The sawfiler will need to maintain the grinding wheel's profile with periodic dressing of the wheel.

Proper tracking of the blade is crucial to accurate cutting and considerably reduces blade breakage. The first step to ensuring good tracking is to check that the two bandwheels or flywheels are co-planar. This can be done by placing a straightedge across the front of the wheels and adjusting until each wheel touches. Rotate the wheels with the blade in position and properly tensioned and check that the tracking is correct. Now install the blade guide rollers and leave a gap of about 1 mm between the back of the blade and the guide flange. The teeth of blades that have become narrow through repeated sharpening will foul the front edge of the guide rollers due to their kerf set and force the blade out of alignment. This can be remedied by cutting of a small step on the rollers' front edges to accommodate the protruding teeth. Ideally the rollers should be crowned, (see Crowned Pulleys) a configuration that assists in the proper tracking of bands and belts, at the same time allowing clearance for the set of the teeth.

Head saws are large bandsaws that make the initial cuts in a log. They generally have a 2 to 3 in (51 to 76 mm) tooth space on the cutting edge and sliver teeth on the back. Sliver teeth are non-cutting teeth designed to wipe slivers out of the way when the blade needs to back out of a cut.

A resaw is a large bandsaw optimized for cutting timber along the grain to reduce larger sections into smaller sections or veneers. Resawing veneers requires a wide blade—commonly 2 to 3 in (51 to 76 mm)—with a small kerf to minimize waste. Resaw blades of up to 1 in (25 mm) may be fitted to a standard bandsaw.

Double cut saws have cutting teeth on both sides. They are generally very large, similar in size to a head saw.

Automatic bandsaws feature preset feed rate, return, fall, part feeding, and part clamping. These are used in production environments where having a machine operator per saw is not practical. One operator can feed and unload many automatic saws.

Some automatic saws rely on numerical control to not only cut faster, but to be more precise and perform more complex miter cuts.

At least two teeth must be in contact with the workpiece at all times to avoid stripping off the teeth.[6]