Florennes (French pronunciation: ​[flɔ.ʁɛn]) is a Walloon municipality located in Belgium in the province of Namur. On January 1, 2006, Florennes had a total population of 10,754. The total area is 133.55 km² which gives a population density of 81 inhabitants per km².

Florennes hosts Florennes Air Base, a Belgian military airfield which is the home base for F-16 Fighting Falcon jets.

The first week-end of every July, Florennes is a large festival due to the folk walk with a couple of thousand valorous walkers.

The village was formerly the site of Florennes Abbey, dissolved during the French Revolution and since entirely demolished. 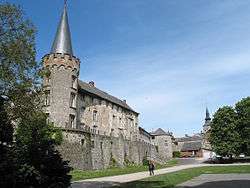