Fernelmont (French pronunciation: ​[fɛʁ.nɛl.mɔ̃]) is a Walloon municipality located in the Belgian province of Namur. On January 1, 2013, Fernelmont had a total population of 7,360. The total area is 65.61 km2 which gives a population density of 112.2 inhabitants per km2.

The municipality of Fernelmont was officially created on 3 January 1977, through the fusion of ten rural municipalities. It was named Fernelmont (Ash Tree Mountain) after a 13th-century castle which was positioned more or less at the centre of the newly created municipality. None of the villages comprising the municipality has ever been called Fernelmont, and the Maison Communale (town hall) is in Noville-les-Bois.

The municipality includes a "Zone d'Activités Économiques" (Z.A.E. / light industrial zone), south of the village of Noville-les-Bois, designed to accommodate small and medium-sized non-polluting businesses, covering an area of up to 120 hectares. At the end of 2010 the Z.A.E. already covered more than 50 hectares, having welcomed around 100 small and medium-sized enterprises, and slightly more than 800 people were employed in the zone. 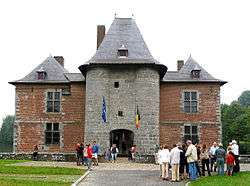 Castle of Fernelmont, the old keep (13th century) from which the municipality takes its name.