Nismes redirects here. The French municipality of which the name sounds alike, is Nîmes.

Viroinval (French pronunciation: ​[viʁwɛ̃val], Walloon: Virwinvå) is a Walloon municipality located in Belgium in the province of Namur. On January 1, 2006 Viroinval had a total population of 5,680. The total area is 120.90 km² which gives a population density of 47 inhabitants per km². 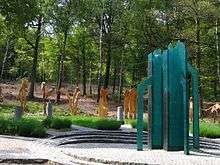 Monument for the geographical centre of the EU until its May 2004 expansion
See also: List of protected heritage sites in Viroinval