The Gulf of Mannar is a large shallow bay forming part of the Laccadive Sea in the Indian Ocean. It lies between the southeastern tip of India and the west coast of Sri Lanka, in the Coromandel Coast Region.

A chain of low islands and reefs known as Ramsethu, also called Adam's Bridge, which includes Mannar Island, separates the Gulf of Mannar from Palk Bay, which lies to the north between India and Sri Lanka. The estuaries of Thamirabarani River of South India and the Malvathu Oya (Malvathu River) of Sri Lanka drain into the Gulf.[3]

Located on the southeastern tip of the subcontinent, the Gulf of Mannar is known to harbour over 3,600 species of flora and fauna, making it one of the richest coastal regions in Asia. 117 hard coral species have been recorded in the Gulf of Mannar. Sea turtles are frequent visitors to the gulf as are sharks, dugongs, and dolphins. However, the combined effects of 47 villages, with a total population of around 50,000 has meant that overharvesting of marine species has become a problem. Fish catches have declined, as have pearl oyster, gorgonian coral, and acorn worm populations. Local fishermen rely on the reef to feed their families, but destructive fishing methods combined with the stress of pollution and coral mining have meant both nearshore and offshore catches have decreased. Endangered species include dolphins, dugongs, whales and sea cucumbers.[1]

In 1986, a group of 21 islets lying off the Tamil Nadu coast between Thoothukudi and Dhanushkodi were declared the Gulf of Mannar Marine National Park. The park and its 10 km buffer zone were declared a Biosphere Reserve in 1989. 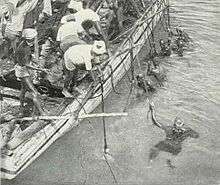 The Gulf of Mannar is known for its pearl banks of Pinctada radiata and Pinctada fucata for at least two thousand years. Pliny the Elder (23–79) praised the pearl fishery of the gulf as most productive in the world.[5][6][7] Although extraction of natural pearls is considered too expensive in most parts of the world, it is still conducted in the gulf.[8]

The chief seaports on the Gulf of Mannar are Thoothukudi (Tuticorin) in Tamil Nadu, and Colombo in Sri Lanka. While these ports can accommodate deep-draft vessels, the shallow Palk Strait can only accommodate small shallow-draft vessels. In July 2005, the Indian Government took preliminary steps to go ahead with the Sethusamudram Shipping Canal Project, which would create a deep channel linking the Gulf of Mannar to the Bay of Bengal. Project boosters emphasize the benefits of a direct shipping route that connects India's east and west coasts without the long trip around Sri Lanka; environmentalists have warned against the grave damage such a project could cause to the sea life and fisheries of the Palk Strait and the Gulf.