This article is about the Indian river. For other uses, see Krishna (disambiguation).

Down stream view of Prakasam Barrage. 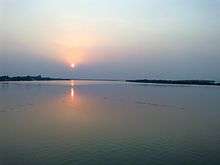 The Krishna River is the fourth-biggest river in terms of water inflows and river basin area in India, after the Ganga, Godavari and Brahmaputra. The river is almost 1,300 kilometres (810 mi) long. The river is also called Krishnaveni. It is a major source of irrigation for Maharashtra, Karnataka, Telangana and Andhra Pradesh.[3]

Krishna river originates in the western ghats near Mahabaleshwar at an elevation of about 1,300 metres, in the state of Maharashtra in central India. It is one of the longest rivers in India. The Krishna river is around 1,400 km in length. The Krishna river's source is at Mahabaleswar near the Jor village in the extreme north of Wai Taluka, Satara District, Maharashtra in the west and empties into the Bay of Bengal at Hamasaladeevi (near Koduru) in Andhra Pradesh, on the east coast. It flows through the state of Karnataka before entering Telangana State. The delta of this river is one of the most fertile regions in India and was the home to ancient Satavahana and Ikshvaku Sun Dynasty kings. Vijayawada is the largest city on the River Krishna.

It causes heavy soil erosion during the monsoon floods. It flows fast and furious, often reaching depths of over 75 feet (23 m). Ironically, there is a saying in Marathi "Santh vaahate Krishnamaai" which means "quiet flows Krishna". This term is used to describe that a person should be as quiet as Krishna. 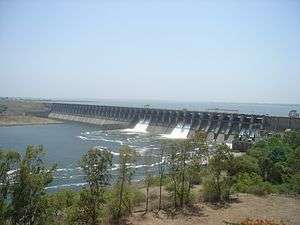 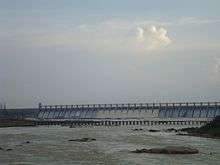 There are four rivers that join the Krishna at a confluence known as Preeti Sangam, or "Lover's Meeting Point" in the Satara District. These are Venna River, Urmodi River, Tarli River and Koyna River.

Three tributaries meet Krishna river near Sangli. These places are considered very holy. It is said that Lord Dattatreya spent some of his days at Audumber on the banks of river Krishna. Sangameswaram of Kurnool district in Andhra Pradesh is a famous pilgrim center for Hindus where Tungabhadra and Bhavanasi rivers join the Krishna river. The Sangameswaram temple is now drowned in the Srisailam reservoir, and visible for devotees only during summer when the reservoir's water level comes down.[4]

The Krishna river rises in the Western Ghats, at an elevation of about 1,337 m (4,386 ft) just north of Mahabaleshwar, about 64 km (40 mi) from the Arabian Sea. It flows for about 1,400 km (870 mi) and outfalls into the Bay of Bengal. The principal tributaries joining Krishna are the Ghataprabha River, Malaprabha River, Bhima River, Tungabhadra River and Musi River.

Most of this basin comprises rolling and undulating country, except for the western border, which is formed by an unbroken line of the Western Ghats. The important soil types found in the basin are black soils, red soils, laterite and lateritic soils, alluvium, mixed soils, red and black soils and saline and alkaline soils.

An average annual surface water potential of 78.1 km3 has been assessed in this basin. Out of this, 58.0 km3 is utilizable water.[7] Culturable area in the basin is about 203,000 km2 (78,000 sq mi), which is 10.4% of the total cultivable area of the country. As the water availability in the Krishna river was becoming inadequate to meet the water demand, Godavari River is linked to the Krishna river by commissioning the Polavaram right bank canal with the help of Pattiseema lift scheme in the year 2015 to augment water availability to the Prakasam Barrage in Andhra Pradesh. The irrigation canals of Prakasam Barrage form part of National Waterway 4.

Mullayanagiri peak in Karnataka at an altitude of 1,930 m (6,330 ft) above msl, is the highest point of the Krishna basin. 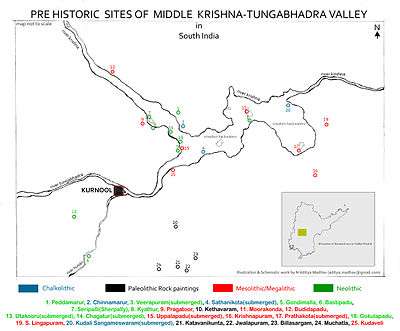 This river is revered by Hindus as sacred. The river is also believed to remove all sins of people by taking a bath in this river. The centre of attraction is the Krishna Pushkaram fair which is held once in twelve years on the banks of the Krishna river. There are many pilgrimage places in Maharashtra, Karnataka, Telangana and Andhra Pradesh on the course of the river.

The first holy place on the river Krishna is "Dakshin Kashi Wai", known for the Mahaganpati Mandir and Kashivishweshwar temple. It has seven ghats along the river. Temples like Dattadeva temple, which is revered by the people of Maharashtra, are located on the banks of Krishna at Nrusinha Waadi and Audumbar near Sangli. Also, located on the banks of the river Krishna are the Sangameshwar Shiva temple at Haripur, goddess Durga temple in Vijayawada and Ramling temple near Sangli, Mallikarjuna temple (Srisailam), Amareshwara Swamy temple (Amaravati (state capital)), Dattadeva temple, Sangameshwara Shiva temples at Alampur in Telangana, Ramling temple, etc. as well as, villages such as Jihe.

Wide spread area near to the Krishna river holds the rich flora and fauna. The last surviving Mangrove forests in the Krishna estuary have been declared as the Krishna Wildlife Sanctuary. The sanctuary is the home to the large number of resident and migratory birds. Fishing cat, otter, Estuarine crocodile, spotted deer, sambar, black buck, snake, lizards and jackal can also be spotted in the sanctuary. The sanctuary also supports rich vegetation with plants like Rhizophora, Avicennia, and Aegiceros. The following are few other wildlife sanctuaries located in the river basin. 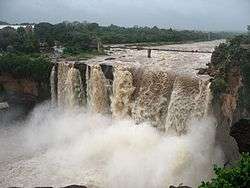 Manikyadhara Falls is located in Chikkamagaluru Taluk of Karnataka. It is formed by the water flowing from the slopes of Mullayanagiri peak which is the highest peak between the Himalayas and the Nilgiris. Barkana Falls is located in Agumbe hills which receives second highest average annual rainfall (7,624.3 mm) in India. The following are few other waterfalls located in the river basin

The Krishna River is spanned by several bridges along its course, some of which are listed below.

In October 2009, heavy floods occurred, isolating 350 villages and leaving millions homeless,[8] which is believed to be first occurrence in 1000 years. The flood resulted in heavy damage to Kurnool, Mahabubnagar, Guntur, Krishna and Nalagonda Districts. The entire city of Kurnool was immersed in approximately 10 ft (3 m) water for nearly 3 days.[9]

At present, the award of Bachawat tribunal dated 31 May 1976 is applicable for sharing the water available in the river among the riparian states. The Brijesh Kumar tribunal award given on 29 November 2013 is challenged by Andhra Pradesh in the Supreme Court and the case pending since then.[11] Newly created Telangana state also approached Supreme Court demanding a fresh tribunal hearing to secure its water needs on equitable basis.[12] 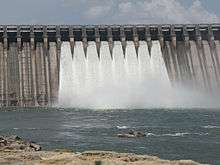 There are many dams constructed across the Krishna river.[13] 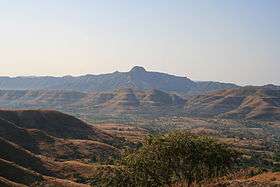 The Deccan Traps near Pune

Most of the years, the river water is not joining the sea due to full utilisation of water mainly in agriculture.[15][16][17] The river receives the waste from the large number of cities and the river basin population has increased to 80 million enhancing pollution load many folds in to the river. Adequate average and minimum continuous environmental flows to the sea are not taking place in most of the years constricting salt export and leading to formation of saline and sodic alkaline soils in the lower reaches of the river basin.[18][19] High alkalinity water is discharged from the ash dump areas of many coal fired power stations in to the river which further increases the alkalinity of the river water whose water is naturally of high alkalinity since the river basin is draining vast area of basalt rock formations.[20] The following are the few coal fired power stations located in the river basin