Vivari Channel in Albania links Lake Butrint with the Straits of Corfu.

In physical geography, a channel is a type of landform consisting of the outline of a path of relatively shallow and narrow body of fluid, most commonly the confine of a river, river delta or strait. The word is cognate to canal, and sometimes shows in this form, e.g. the Hood Canal. Most examples of this are fjords in the Pacific Northwest; a notable exception is the Casiquiare canal. All likely share borrowing from Spanish, Portuguese or French.

Channels can be either natural or human-made. A channel is typically outlined in terms of its bed and banks.

Channel initiation refers to the site on a mountain slope where water begins to flow between identifiable banks.[1] This site is referred to as the channel head and it marks an important boundary between hillslope processes and fluvial processes.[1] The channel head is the most upslope part of a channel network and is defined by flowing water between defined identifiable banks.[1] A channel head forms as overland flow and/or subsurface flow accumulate to a point where shear stress can overcome erosion resistance of the ground surface.[1] Channel heads are often associated with colluvium, hollows and landslides.[1]

Natural channels are formed by fluvial process and are found across the Earth. These are mostly formed by flowing water from the hydrological cycle, though can also be formed by other fluids such as flowing lava. Channels also describe the deeper course through a reef, sand bar, bay, or any shallow body of water. One example is the Columbia River, a river located in the US states of Washington and Oregon, and which empties into the Pacific Ocean in Astoria, Oregon.

A stream channel is the physical confine of a stream (river) consisting of a bed and stream banks. Stream channels exist in a variety of geometries. Stream channel development is controlled by both water and sediment movement. There is a difference between low gradient streams (less than a couple of percent in gradient or slightly sloped) and high gradient streams (steeply sloped). A wide variety of stream channel types can be distinguished (e.g. Braided rivers, Wandering rivers, Single Thread Sinuous rivers etc.). During floods, water flow may exceed the capacity of the channel and flood waters will spill out of the channel and across the valley bottom, floodplain or drainage area.

The channel form is described in terms of geometry (plan, cross-sections, profile) enclosed by the materials of its bed and banks. This form is under influence of two major forces: water discharge and sediment supply. For erodible channels the mutual dependence of its parameters may be qualitatively described by the Lane's Principle (also known as the Lane's relationship):[2] the product of the sediment load and bed grain size is proportional to the product of discharge and channel slope.[3] 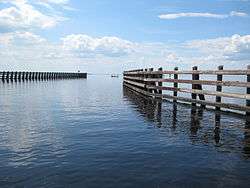 It is especially used as a nautical term to mean the dredged and marked lane of safe travel which a cognizant governmental entity guarantees to have a minimum depth across its specified minimum width to all vessels transiting a body of water (see Buoy). The term not only includes the deep-dredged ship-navigable parts of an estuary or river leading to port facilities, but also to lesser channels accessing boat port-facilities such as marinas. When dredged channels traverse bay mud or sandy bottoms, repeated dredging is often necessary because of the unstable subsequent movement of benthic soils.[4]

Responsibility for monitoring navigability conditions of navigation channels to various port facilities varies, and the actual maintenance work is frequently performed by a third party. Storms, sea-states, flooding, and seasonal sedimentation adversely affect navigability. In the U.S., navigation channels are monitored and maintained by the United States Army Corps of Engineers (USACE), although dredging operations are often carried out by private contractors (under USACE supervision). USACE also monitors water quality and some remediation. This was first established under the Rivers and Harbors Act of 1899 and modified under acts of 1913, 1935, and 1938. For example, the USACE developed the Intracoastal Waterway, and has the Mississippi Valley Division responsible for the Mississippi River from the Gulf to Cairo, Illinois, the North Atlantic Division for New York Harbor and Port of Boston, and the South Pacific Division for Port of Los Angeles and Port of Long Beach. Waterways policing as well as some emergency spill response falls under United States Coast Guard jurisdiction, including inland channels serving ports like Saint Louis hundreds of miles from any coast. The various state or local governments maintain lesser channels, for example former Erie Canal.

In a larger nautical context, as a geographical place name, the term channel is another word for strait, which is defined as a relatively narrow body of water that connects two larger bodies of water. In this nautical context, the terms strait, channel, sound, and passage are synonymous and usually interchangeable. For example, in an archipelago, the water between islands is typically called a channel or passage. The English Channel is the strait between England and France.

Extraterrestrial natural channels are found elsewhere in the Solar System than the Earth and the longest and widest of which are the outflow channels on Mars and the channels of Venus many of which are tens of kilometres wide (the network of channels flowing from Argyre Planitia on Mars for example is 8000 km in length and the Baltis Vallis Venus is 7000 km compared to the 6,650 km Nile, the largest active channel on Earth). The exact formation of these large ancient channels is unknown although it is theorised that those on Mars may have been formed due to catastrophic flooding and on Venus by lava flow. In planetary science the term "rille" is sometimes used for similar formations found on The Moon and Mercury that are of inconclusive origin. Channels have also been recently discovered on Titan. The Saturnian moon has the only known permanently active channels in the Solar System other than Earth, the largest known of which is 400 km in length.[5] These are believed to be formed from flowing hydrocarbons in the hypothesized methanological cycle.[6]