Not to be confused with Matrix calculus or Vector calculus.

In mathematics, geometric calculus extends the geometric algebra to include differentiation and integration. The formalism is powerful and can be shown to encompass other mathematical theories including differential geometry and differential forms.[1]

With a geometric algebra given, let a and b be vectors and let F(a) be a multivector-valued function. The directional derivative of F(a) along b is defined as

provided that the limit exists, where the limit is taken for scalar ε. This is similar to the usual definition of a directional derivative but extends it to functions that are not necessarily scalar-valued.

Next, choose a set of basis vectors

and consider the operators, noted

, that perform directional derivatives in the directions of

Then, using the Einstein summation notation, consider the operator :

It can be shown that this operator is independent of the choice of frame, and can thus be used to define the geometric derivative:

This is similar to the usual definition of the gradient, but it, too, extends to functions that are not necessarily scalar-valued.

It can be shown that the directional derivative is linear regarding its direction, that is:

The standard order of operations for the geometric derivative is that it acts only on the function closest to its immediate right. Given two functions F and G, then for example we have

Although the partial derivative exhibits a product rule, the geometric derivative only partially inherits this property. Consider two functions F and G:

Since the geometric product is not commutative with

in general, we cannot proceed further without new notation. A solution is to adopt the overdot notation, in which the scope of a geometric derivative with an overdot is the multivector-valued function sharing the same overdot. In this case, if we define

then the product rule for the geometric derivative is

Let F be an r-grade multivector. Then we can define an additional pair of operators, the interior and exterior derivatives,

In particular, if F is grade 1 (vector-valued function), then we can write

and identify the divergence and curl as

be a set of basis vectors that span an n-dimensional vector space. From geometric algebra, we interpret the pseudoscalar

to be the signed volume of the n-parallelotope subtended by these basis vectors. If the basis vectors are orthonormal, then this is the unit pseudoscalar.

More generally, we may restrict ourselves to a subset of k of the basis vectors, where

, to treat the length, area, or other general k-volume of a subspace in the overall n-dimensional vector space. We denote these selected basis vectors by

. A general k-volume of the k-parallelotope subtended by these basis vectors is the grade k multivector

Even more generally, we may consider a new set of vectors

proportional to the k basis vectors, where each of the

is a component that scales one of the basis vectors. We are free to choose components as infinitesimally small as we wish as long as they remain nonzero. Since the outer product of these terms can be interpreted as a k-volume, a natural way to define a measure is

The measure is therefore always proportional to the unit pseudoscalar of a k-dimensional subspace of the vector space. Compare the Riemannian volume form in the theory of differential forms. The integral is taken with respect to this measure:

More formally, consider some directed volume V of the subspace. We may divide this volume into a sum of simplices. Let

be the coordinates of the vertices. At each vertex we assign a measure

as the average measure of the simplices sharing the vertex. Then the integral of F(x) with respect to U(x) over this volume is obtained in the limit of finer partitioning of the volume into smaller simplices:

The reason for defining the geometric derivative and integral as above is that they allow a strong generalization of Stokes' theorem. Let

be a multivector-valued function of r-grade input A and general position x, linear in its first argument. Then the fundamental theorem of geometric calculus relates the integral of a derivative over the volume V to the integral over its boundary:

As an example, let

for a vector-valued function F(x) and a (n-1)-grade multivector A. We find that

Thus we recover the divergence theorem,

Just as the geometric derivative

is defined over the entire n-dimensional space, we may wish to define an intrinsic derivative

, locally defined on the manifold:

(Note: The right hand side of the above may not lie in the tangent space to the manifold. Therefore it is not the same as

, which necessarily does lie in the tangent space.)

If a is a vector tangent to the manifold, then indeed both the geometric derivative and intrinsic derivative give the same directional derivative:

Although this operation is perfectly valid, it is not always useful because

itself is not necessarily on the manifold. Therefore we define the covariant derivative to be the forced projection of the intrinsic derivative back onto the manifold:

Since any general multivector can be expressed as a sum of a projection and a rejection, in this case

we introduce a new function, the shape tensor

is the commutator product. In a local coordinate basis

spanning the tangent surface, the shape tensor is given by

Importantly, on a general manifold, the covariant derivative does not commute. In particular, the commutator is related to the shape tensor by

is of interest. However it, like the intrinsic derivative, is not necessarily on the manifold. Therefore we can define the Riemann tensor to be the projection back onto the manifold:

Lastly, if F is of grade r, then we can define interior and exterior covariant derivatives as

and likewise for the intrinsic derivative.

On a manifold, locally we may assign a tangent surface spanned by a set of basis vectors

. We can associate the components of a metric tensor, the Christoffel symbols, and the Riemann tensor as follows:

These relations embed the theory of differential geometry within geometric calculus.

We can alternatively introduce a k-grade multivector A as

and its Hodge dual

embed the theory of differential forms within geometric calculus.

Following is a diagram summarizing the history of geometric calculus. 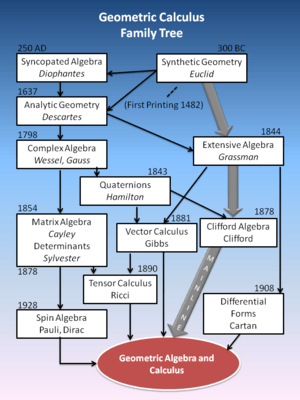