and the integration operator J. (Usually J is used instead of I to avoid confusion with other I-like glyphs and identities.)

In this context, the term powers refers to iterative application of a linear operator on a function, in some analogy to function composition acting on a variable, e.g., f 2(x) = f(f(x)). For example, one may ask the question of meaningfully interpreting

as an analog of the functional square root for the differentiation operator, i.e., an expression for some linear operator that when applied twice to any function will have the same effect as differentiation.

More generally, one can look at the question of defining the linear functional

for real-number values of a in such a way that when a takes an integer value, n, the usual power of n-fold differentiation is recovered for n > 0, and the −nth power of J when n < 0.

Nature of the fractional derivative

Not to be confused with Fractal derivative.

An important point is that is derivative at a point x is a local property only when a is an integer; in non-integer cases we cannot say that the fractional derivative at x of a function f depends only on values of f very near x, in the way that integer-power derivatives certainly do. Therefore it is expected that the theory involves some sort of boundary conditions, involving information on the function further out. To use a metaphor, the fractional derivative requires some peripheral vision.

As far as the existence of such a theory is concerned, the foundations of the subject were laid by Liouville in a paper from 1832. The fractional derivative of a function to order a is often now defined by means of the Fourier or Mellin integral transforms.[1]

A fairly natural question to ask is whether there exists a linear operator H, or half-derivative, such that

It turns out that there is such an operator, and indeed for any a > 0, there exists an operator P such that

or to put it another way, the definition of dny/dxn can be extended to all real values of n.

Let f(x) be a function defined for x > 0. Form the definite integral from 0 to x. Call this

and this can be extended arbitrarily.

leads in a straightforward way to a generalization for real n.

Using the gamma function to remove the discrete nature of the factorial function gives us a natural candidate for fractional applications of the integral operator.

This is in fact a well-defined operator.

It is straightforward to show that the J operator satisfies

This relationship is called the semigroup property of fractional differintegral operators. Unfortunately the comparable process for the derivative operator D is significantly more complex, but it can be shown that D is neither commutative nor additive in general. 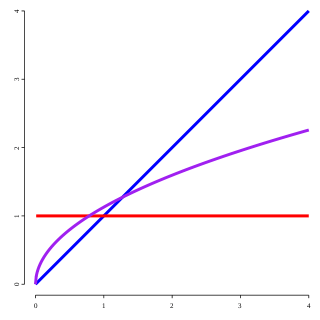 The half derivative (purple curve) of the function f(x) = x (blue curve) together with the first derivative (red curve).

The first derivative is as usual

Repeating this gives the more general result that

Which, after replacing the factorials with the gamma function, leads us to

, we obtain the half-derivative of the function

which is indeed the expected result of

For negative integer power k, the gamma function is undefined and we have to use the following relation:[2]

This extension of the above differential operator need not be constrained only to real powers. For example, the (1 + i)th derivative of the (1 − i)th derivative yields the 2nd derivative. Also notice that setting negative values for a yields integrals.

For a general function f(x) and 0 < α < 1, the complete fractional derivative is

For arbitrary α, since the gamma function is undefined for arguments whose real part is a negative integer and whose imaginary part is zero, it is necessary to apply the fractional derivative after the integer derivative has been performed. For example,

We can also come at the question via the Laplace transform. Noting that

as expected. Indeed, given the convolution rule

which is what Cauchy gave us above.

is a normalization function such that

The classical form of fractional calculus is given by the Riemann–Liouville integral, which is essentially what has been described above. The theory for periodic functions (therefore including the 'boundary condition' of repeating after a period) is the Weyl integral. It is defined on Fourier series, and requires the constant Fourier coefficient to vanish (thus, it applies to functions on the unit circle whose integrals evaluate to 0).

By contrast the Grünwald–Letnikov derivative starts with the derivative instead of the integral.

The Hadamard fractional integral is introduced by J. Hadamard [5] and is given by the following formula,

The following list summarizes the fractional derivatives defined in the literature.[7]

And the Atangana–Baleanu fractional derivative in Riemann–Liouville is defined as:

which generalizes the Riemann–Liouville fractional integral and the Weyl integral.

In the context of functional analysis, functions f(D) more general than powers are studied in the functional calculus of spectral theory. The theory of pseudo-differential operators also allows one to consider powers of D. The operators arising are examples of singular integral operators; and the generalisation of the classical theory to higher dimensions is called the theory of Riesz potentials. So there are a number of contemporary theories available, within which fractional calculus can be discussed. See also Erdélyi–Kober operator, important in special function theory (Kober 1940), (Erdélyi 1950–51).

As described by Wheatcraft and Meerschaert (2008),[13] a fractional conservation of mass equation is needed to model fluid flow when the control volume is not large enough compared to the scale of heterogeneity and when the flux within the control volume is non-linear. In the referenced paper, the fractional conservation of mass equation for fluid flow is:

In 2013–2014 Atangana et al. described some groundwater flow problems using the concept of derivative with fractional order.[14][15] In these works, The classical Darcy law is generalized by regarding the water flow as a function of a non-integer order derivative of the piezometric head. This generalized law and the law of conservation of mass are then used to derive a new equation for groundwater flow.

This equation has been shown useful for modeling contaminant flow in heterogenous porous media.[16][17][18] Atangana and Kilicman extended fractional advection dispersion equation to variable order fractional advection dispersion equation. In their work, the hydrodynamic dispersion equation was generalized using the concept of variational order derivative. The modified equation was numerically solved via the Crank-Nicholson scheme. The stability and convergence of the scheme in this case were presented. The numerical simulations showed that, the modified equation is more reliable in predicting the movement of pollution in the deformable aquifers, than the constant fractional and integer derivatives[19]

Anomalous diffusion processes in complex media can be well characterized by using fractional-order diffusion equation models.[20][21] The time derivative term is corresponding to long-time heavy tail decay and the spatial derivative for diffusion nonlocality. The time-space fractional diffusion governing equation can be written as

Fractional derivatives are used to model viscoelastic damping in certain types of materials like polymers.[23]

See also [24] and the references therein. Such models are linked to the commonly recognized hypothesis that multiple relaxation phenomena give rise to the attenuation measured in complex media. This link is further described in [25] and in the survey paper,[26] as well as the acoustic attenuation article. See [27] for a recent paper which compares fractional wave equations which model power-law attenuation.

The fractional Schrödinger equation, a fundamental equation of fractional quantum mechanics, has the following form:[28]

where the solution of the equation is the wavefunction ψ(r, t) – the quantum mechanical probability amplitude for the particle to have a given position vector r at any given time t, and ħ is the reduced Planck constant. The potential energy function V(r, t) depends on the system.

The index α in the fractional Schrödinger equation is the Lévy index, 1 < α ≤ 2.

Article regarding the history of fractional calculus