In mathematics, the root test is a criterion for the convergence (a convergence test) of an infinite series. It depends on the quantity

are the terms of the series, and states that the series converges absolutely if this quantity is less than one but diverges if it is greater than one. It is particularly useful in connection with power series. 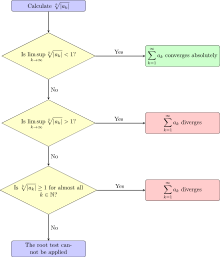 Decision diagram for the root test

The root test was developed first by Augustin-Louis Cauchy who published it in his textbook Cours d'analyse (1821).[1] Thus, it is sometimes known as the Cauchy root test or Cauchy's radical test. For a series

the root test uses the number

where "lim sup" denotes the limit superior, possibly ∞. Note that if

converges then it equals C and may be used in the root test instead.

The root test states that:

There are some series for which C = 1 and the series converges, e.g.

, and there are others for which C = 1 and the series diverges, e.g.

This test can be used with a power series

where the coefficients cn, and the center p are complex numbers and the argument z is a complex variable.

The terms of this series would then be given by an = cn(z − p)n. One then applies the root test to the an as above. Note that sometimes a series like this is called a power series "around p", because the radius of convergence is the radius R of the largest interval or disc centred at p such that the series will converge for all points z strictly in the interior (convergence on the boundary of the interval or disc generally has to be checked separately). A corollary of the root test applied to such a power series is that the radius of convergence is exactly

taking care that we really mean ∞ if the denominator is 0.

The proof of the convergence of a series Σan is an application of the comparison test. If for all n ≥ N (N some fixed natural number) we have

. Since the geometric series

by the comparison test. Hence Σan converges absolutely. Note that

for infinitely many n, then an fails to converge to 0, hence the series is divergent.

Proof of corollary: For a power series Σan = Σcn(z − p)n, we see by the above that the series converges if there exists an N such that for all n ≥ N we have

for all n ≥ N, which implies that in order for the series to converge we must have

for all sufficiently large n. This is equivalent to saying

Now the only other place where convergence is possible is when

(since points > 1 will diverge) and this will not change the radius of convergence since these are just the points lying on the boundary of the interval or disc, so

This article incorporates material from Proof of Cauchy's root test on PlanetMath, which is licensed under the Creative Commons Attribution/Share-Alike License.