Not to be confused with John Connally.

Connally studied at Baylor University and earned his A.B. in 1896.[1][2] He later attended the University of Texas School of Law, earning his LL.B. in 1898.[1][2] While there, Connally was a close friend of future Governor of Texas Pat Neff and future United States Senator Morris Sheppard.[3] After earning his law degree, he enlisted in the 2nd Texas Volunteer Infantry to fight in the Spanish–American War.[2] After the end of the war, he established a law firm in Marlin, Texas, where he worked until his entry into politics.[2] 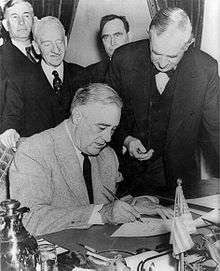 Connally (next to Roosevelt) holding a watch to fix the exact time of the declaration of war against Germany (3:05 PM E.S.T. on 11 December 1941)

Connally ran unopposed and was elected to the Texas House of Representatives in 1900 and 1902.[4] During his tenure in the Texas House he was a prominent opponent of monopolies and co-authored the Texas Anti-Trust Law of 1903.[2] After 1904, he left state politics to pursue his legal career, and served as the prosecuting attorney for Falls County from 1906 to 1910.[4] In 1916, he made his first foray into national politics by running for the vacant House seat for the 11th Congressional District of Texas.[2][4] After resigning his office to fight in World War I, Connally returned to the House where he served on the House Committee on Foreign Affairs and worked against isolationist policies.[2]

In 1928 Connally was elected to the U.S. Senate.[2] During his time in the Senate he supported Roosevelt's New Deal legislation through the passage of the Connally Hot Oil Act of 1935, which attempted to circumvent the Supreme Court of the United States' rejection of a key part of New Deal legislation.

He was also a member and vice-chairman of the United Nations Conference on International Organization in 1945 that chartered the United Nations.[2] He authored the noted "Connally Amendment," which amended the U.S. ratification of the U.N. charter to bar the International Court of Justice from having jurisdiction over domestic matters '"as determined by the United States"'.[6]

On October 20, 1951, when General Mark Wayne Clark was nominated by President Harry Truman to be the U.S. emissary to the Holy See, Connally protested against the decision along with other Protestant groups on First Amendment grounds, and Clark later withdrew his nomination on January 13, 1952.[7]

In 1953, Connally retired from the Senate, ending his career in national politics.[2]

Role as chairman of the Foreign Relations Committee

In 1943 a confidential analysis by British scholar Isaiah Berlin of the Senate Foreign Relations Committee for the British government characterized Senator Connally:

The chairman of the Committee, Tom Connally of Texas, is a very typical, exuberant Southern figure with the appearance and mannerisms of an old-fashioned actor and a gay and hearty manner which conceals lack both of strength and of clear public principles. He is normally the spokesman of the Administration and, in particular, of the Department of State. His voting record is that of a straight interventionist. His principal point of deviation from [Secretary of State] Hull's policies is the subject to which Mr. Hull has dedicated a large portion of his life, namely, the policy of reciprocal trade. Representing as he does, a great cattle breeding State, his enthusiasm for free trade with, e.g., the Argentine, is not ardent. He has been a solid supporter of the department's policies toward, e.g., France and North Africa. His support of its economic policies is regarded as doubtful. On internal issues he shares all the beliefs and prejudices of the South.[8]

During his time in office, Senator Connally also served as the first delegate from the United States to the United Nations First Committee, known at the time in 1946 as The Political and Security Committee. Meetings of the First Committee were held from October to December 1946 in the village of Lake Success in New York. Mr. Connally was the first to motion for the recommendation to the General Assembly to accept the applications of Afghanistan, Iceland, and Sweden, after they had been approved by the Security Council.[9]

Senator Connally's grandson and namesake Tom Connally was a Houston attorney and partner with Fullbright and Jaworski. His granddaughter Louise Connally Strong, MD is an internationally respected physician and head of genetics cancer research at MD Anderson Cancer Institute in Houston, Texas.

Tom Connally has been described as a cousin of Texas Governor John B. Connally, Jr., but John Connally stated in his autobiography that they were not related.

Tom Connally died of pneumonia on October 28, 1963. He is buried in Calvary Cemetery in Marlin, Texas, next to his first wife.