Simon Cameron (March 8, 1799 – June 26, 1889) was an American politician who served as United States Secretary of War for Abraham Lincoln at the start of the American Civil War.

Cameron made his fortune in railways, canals and banking, and founded the Bank of Middletown.[1] He then turned to a life of politics. He became a U.S. senator in 1845 for the state of Pennsylvania, succeeding James Buchanan. Originally a Democrat, he failed to secure a nomination for senator from the Know-Nothing party, and joined the People's Party, the Pennsylvania branch of what became the Republican Party. He won the Senate seat in 1857, and became one of the candidates for the Republican nomination in the presidential election of 1860.

Cameron gave his support to Abraham Lincoln, and became his Secretary of War. He served only a year before resigning amidst allegations of disorganization and corruption during the early phases of the American Civil War. Cameron then became the minister to Russia, but was overseas for less than a year.

Beginning in 1867, he again served in the Senate; he was succeeded by his son, J. Donald Cameron in 1877, and only resigned upon confirmation that his son would succeed him.

After leaving the senate, Cameron lived in retirement, but still participated in politics and tended to his many business interests. He died in 1889 and was buried in Harrisburg.

Simon Cameron was born in Maytown, Pennsylvania,[1] to Charles Cameron and Martha Pfoutz. He was orphaned at nine and later apprenticed to a printer, Andrew Kennedy, editor of the Northumberland Gazette before entering the field of journalism. He was editor of the Bucks County Messenger in 1821. A year later, he moved to Washington, D.C., and studied political movements while working for the printing firm of Gales and Seaton. He married Margaret Brua and returned to Harrisburg, Pennsylvania where he purchased and ran the Republican in 1824. 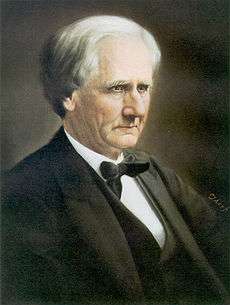 Cameron served as state printer of Pennsylvania from 1825 until 1827, and was state adjutant general in 1826. He constructed several rail lines and merged them into the Northern Central Railway. He founded the Bank of Middletown in 1832 and engaged in other business enterprises. In 1838, he was appointed as commissioner to settle claims of the Winnebago Indians.

Cameron began his political career as a Democrat, supporting the campaigns of Andrew Jackson and Martin Van Buren.[2] He was elected to replace James Buchanan in the United States Senate in 1845, serving until 1849.[1] A persistent opponent of slavery, Cameron switched to the Know Nothing Party, before joining the Republican Party in 1856.[3] In 1857, Cameron was again elected to the United States Senate.[1]

Cameron was nominated for President, but gave his support to Abraham Lincoln at the 1860 Republican National Convention. Lincoln, as part of a political bargain, named Cameron Secretary of War. Because of allegations of corruption and lax management, he was forced to resign early in 1862. His corruption was so notorious that a Pennsylvania congressman, Thaddeus Stevens, when discussing Cameron's honesty with Lincoln, told Lincoln that "I don't think that he would steal a red hot stove."[1] When Cameron demanded Stevens retract this statement, Stevens told Lincoln "I believe I told you he would not steal a red-hot stove. I will now take that back." Cameron was succeeded as Secretary of War by Edwin M. Stanton, who had been serving as a legal advisor to the War Secretary. Cameron then served as Minister to Russia.[1]

Cameron's brother, James Cameron, colonel of the 79th New York Volunteer Infantry Regiment, was killed in action at the First Battle of Bull Run on July 21, 1861. 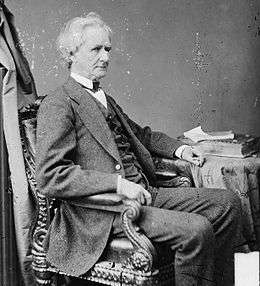 Cameron made a political comeback after the Civil War, building a powerful state party machine that would dominate Pennsylvania politics for the next seventy years.[3] In 1866, Cameron was again elected to the Senate. Cameron convinced his close friend Ulysses S. Grant to appoint his son, James Donald Cameron, as Secretary of War in 1876.[3] Later that year, Cameron helped Rutherford B. Hayes win the Republican nomination in 1876.[3] Cameron resigned from the Senate in 1877 after assuring that his son would be the successor to his seat. Though Cameron had intended for his son to succeed him as head of the state machine, Matthew Quay ultimately succeeded Cameron as the party boss.[4]

Cameron retired to his farm at Donegal Springs Cameron Estate near Maytown, Pennsylvania where he died on June 26, 1889.[1] He is buried in the Harrisburg Cemetery in Harrisburg, Pennsylvania.[1] Cameron County, Pennsylvania and Cameron Parish, Louisiana are named in his honor.