Globe Life Park in Arlington is a stadium in Arlington, Texas, located between Dallas and Fort Worth. It is home to the American League's Texas Rangers, and the Texas Rangers Baseball Hall of Fame. It was constructed as a replacement for nearby Arlington Stadium. It was known as The Ballpark in Arlington until May 7, 2004, when Ameriquest bought the naming rights to it and renamed it Ameriquest Field in Arlington. On March 19, 2007, the Rangers severed their relationship with Ameriquest and announced that it would be renamed Rangers Ballpark in Arlington. On February 5, 2014, Globe Life and Accident Insurance Company bought the naming rights to it. Globe Life is owned by Torchmark Corporation, which is based in McKinney, Texas, a northern suburb of Dallas.[6]

In November 2016, Votes agreed to build a new ballpark adjacent to where Globe Life Park currently stands. It will open as early as the 2020 season.[7]

Funding was approved for a new home for the Rangers in 1991 by the City of Arlington. Construction began on April 2, 1992 a short distance away from Arlington Stadium, the stadium it would replace, and the new Ballpark in Arlington opened on April 1, 1994 in an exhibition contest between the Rangers and the New York Mets. The first official game was on April 11 against the Milwaukee Brewers.

The largest crowd to watch a Rangers baseball game was on October 30, 2010, when 52,419 fans watched Game 3 of the 2010 World Series against the San Francisco Giants.

On May 20, 2016, the Rangers announced that they intend to move from Globe Life Park to a new ballpark for the 2021 season.[8] The new air conditioned stadium will feature a retractable roof,[9] which many argue could increase stadium revenue from those who would otherwise not want to sit in the heat during games as the season progresses throughout the hot Texas summer, in particular those that occur in the afternoon.

Voting for the new ballpark began on November 8 (the same day as the United States presidential election, 2016) for residents in the city limits of Arlington.[10]

On November 8, 2016, the ballpark was passed with a 60% favorable vote.[7] It will open as early as the 2020 season.[7] Regarding Globe Life Park's fate, it will not be torn down, like it's predecessor Arlington Stadium was. Instead, it will be converted into a venue for tenants and will include gift shops, restaurants, and offices.[11] This will be the team's second move to their third ballpark in Arlington since they began in 1972 (their first ballpark was Arlington Stadium). 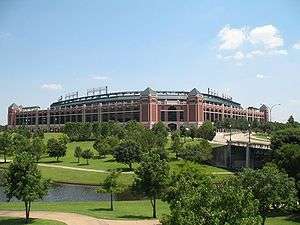 Park by the Home Plate Entrance at Globe Life Park in Arlington.

The stadium was designed by David M. Schwarz Architectural Services of Washington, D.C. The Rangers chose to build a retro-style ballpark, incorporating many features of baseball's Jewel Box parks. A roofed home run porch in right field is reminiscent of Tiger Stadium, while the white steel frieze that surrounds the upper deck was copied from the pre-1973 Yankee Stadium. The out-of-town scoreboard (removed in 2009 and replaced with a state-of-the-art videoboard) was built into the left-field wall—a nod to Fenway Park, while the numerous nooks and crannies in the outfield fence are a reminder of Ebbets Field.[12] The arched windows are a reminder of Comiskey Park. However, it has a few distinct features of its own. Several traditional Texas-style stone carvings are visible throughout it. A four-story office building in center field encloses it, with a white steel multilevel facade similar to the facade on the roof.

As the stadium was built on one of the former Arlington Stadium parking lots, the irregular dimensions of the outfield were planned independently, rather than being forced by neighboring structures. The home plate, foul poles (replaced prior to the 2016 season), and bleachers were originally at Arlington Stadium. The Home Plate was inserted into place by Richard Greene (then Mayor of Arlington), Elzie Odom (Head of Arlington Home Run Committee and later Mayor of Arlington), and George W. Bush (former part Rangers owner, later Texas Governor and President of the United States).

The stadium's 810-foot (250 m)-long facades are made of brick and Texas Sunset Red granite. Bas-relief friezes depict significant scenes from the history of both Texas and baseball. The calculus of seating arrangements represented a new economic model for the sport: a critical mass of high-dollar seats close to the infield boost ticket revenue. The stadium has three basic seating tiers: lower, club and upper deck. Two levels of luxury suites occupy spaces behind sliding glass doors above and below the club tier.[13]

The stadium has a large number of obstructed-view seats. In some cases, the view is cut off by an overhang or underhang, and others are directly in front of the foul or support poles. Also, the design of the upper deck leaves it one of the highest in baseball. The view from the grandstand reserved sections in left is particularly obstructed.

Prior to the 2012 season, the visitor bullpen was reconfigured to be parallel to the field after the previous visitor bullpen configuration had an excessive amount of heat during hot weather games. To allow construction, a few rows of bleacher sections were removed. 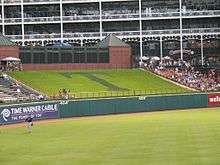 Globe Life Park in Arlington in 2006, with Greene's Hill in center field

Greene's Hill is a sloped section of turf located behind the center field fence at the home field of the ballpark. The Hill serves as a batter's eye, providing a contrasting background behind the pitchers which enables hitters to more easily see the baseball after the pitcher's release. It was originally designed as a picnic area for fans but the Rangers have never initiated this policy. It was named after former Arlington mayor Richard Greene in November 1997. For a couple of years in the 2000s, the Rangers had the "T" from the Texas Rangers logo mowed into the grass, but this is no longer done. In 2010, the Rangers started a tradition where they had four girls run around on it with giant Texas state flags when the Rangers scored, similar to what many football teams do when their teams score.

The field is one of the most notoriously hitter-friendly parks in baseball, due to the high temperatures, relatively short fences, and the design of the stadium which has allowed the area's high winds to swirl and lift balls that wouldn't normally make it out. In truth, the park would give up even more home runs if not for the office building in center and the field being 22 feet (6.7 m) below street level.[15] 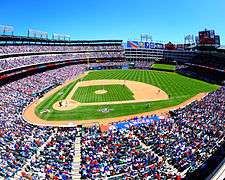 The Ballpark during the day

Despite being hailed as a wonderful venue in its infant years, articles in The Dallas Morning News began to suggest that the ballpark would have been better served by having a dome or retractable roof – much like Minute Maid Park, the home of the Houston Astros – due to the often oppressive heat that settles over Texas during baseball season, with temperatures on the field being in excess of 110°. Many argue that the intense heat is a liability in attracting players, particularly starting pitchers.[19]

That being said, it is questionable that retractable roof technology was a good candidate at the time the stadium was constructed, when modern mechanical retractable-roof ballparks like Chase Field, Safeco Field, Minute Maid Park, and Miller Park would not open until several years after it.

Many local sports writers in recent years have suggested adding a roof but the idea has not found any traction within the Rangers organization.

The Rangers are planning to open a retractable roof ballpark as early as 2020.[20] 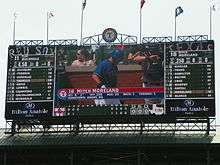 The new HD screen on top of the right field porch

On December 3, 2010, the Rangers announced that extensive renovations to the stadium would be made and ready for the 2011 season.[21] These renovations included:

A Panoramic Picture of Globe Life Park in Arlington. Taken May 11, 2016

On April 11, 1994, the first game at the ballpark, Holly Minter, who was posing for a picture while intoxicated, fell 35 feet over a railing in right field, fracturing several bones and causing the team to raise the height of the railings.[22]

On July 6, 2010, firefighter Tyler Morris, leaning over the rail to catch a Nelson Cruz foul ball, fell 30 feet onto the section below him, causing a head injury and a severely sprained ankle to himself and minor injuries to fans he landed on.[23] The game was stopped for 15 minutes while paramedics treated him.[24]

On July 7, 2011, firefighter Shannon Stone, from Brownwood, Texas, was attending the Rangers game against the Oakland Athletics with his six-year-old son, Cooper, when outfielder Josh Hamilton threw him a ball, as he had asked.[22] Reaching for it, he flipped over the railing and fell 20 feet, head-first, onto the concrete behind the out-of-town scoreboard in left field.[22] He was conscious and talking as paramedics tended to him, but he died en route to the hospital.[25] The cause of death was identified as blunt force trauma.[26] This was the fourth fall in the stadium's 17 years of history.[27] A moment of silence was held for him prior to the next day's game, both the Rangers and Athletics wore black ribbons on their uniforms, and the flags at the stadium were flown at half-staff in memory of him.[26] The Rangers Foundation set up a memorial fund for Stone's family.[28]

A tarp was placed over the opening through which Stone fell.[26] Rangers team president Nolan Ryan said the height of the railings exceeds the requirement of the building codes but said the team would do "whatever it takes" to ensure the safety of the fans;[29] on July 20, 2011, the Rangers announced they would raise all railings in the front of seating sections to 42 inches.[30] On August 10, 2011, the team announced it would erect a statue memorializing Stone.[31] Cooper helped unveil the statue on April 5, 2012. It depicts him and his father wearing baseball caps. They are holding hands and looking at each other as if they were talking. The inscription on the statue reads "In memory of Shannon Stone and dedicated to all fans who love the game".