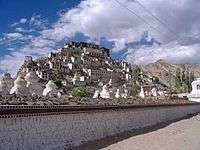 Thikse Monastery near Leh in Ladakh, India and is typical of Tibetan Buddhist gömpa design. 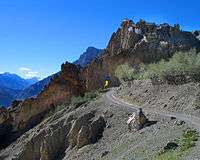 Gompas, Gönpas, or Gumbas (Tibetan: དགོན་པ།, Wylie: dgon pa "remote place", Sanskrit araṇya[1]), also known as ling (Wylie: gling ), are Buddhist ecclesiastical fortifications of learning, lineage and sādhanā that may be understood as a conflation of a fortification, a vihara and a university associated with Tibetan Buddhism and thus common in historical Tibetan regions including parts of China, India, Nepal, Ladakh and Bhutan. Bhutanese dzong architecture is a subset of traditional gompa design.

Design and interior details vary from region to region; however, all follow a general sacred geometrical mandala design of a central prayer hall containing a murti or thangka, benches for the monks or nuns to engage in prayer or meditation and attached living accommodation. The gömpa or ling may also be accompanied by any number of stupas.

For practical purposes 'Gompa' is an imprecise term used by westerners traveling in Tibetan regions to refer to a variety of religious buildings, generally correlating to what might be described as a church but including small temple buildings and other places of worship or religious learning.